Going Behind the Fox's Tail

My friend Sweetpea, who lives in Angles-sur-l'Anglin, contacted me several weeks ago to say there was a new nature reserve in Angles that she thought I would like to see, and she particularly wanted to show me the very nice information board that had gone up to tell visitors what was so special about the site. 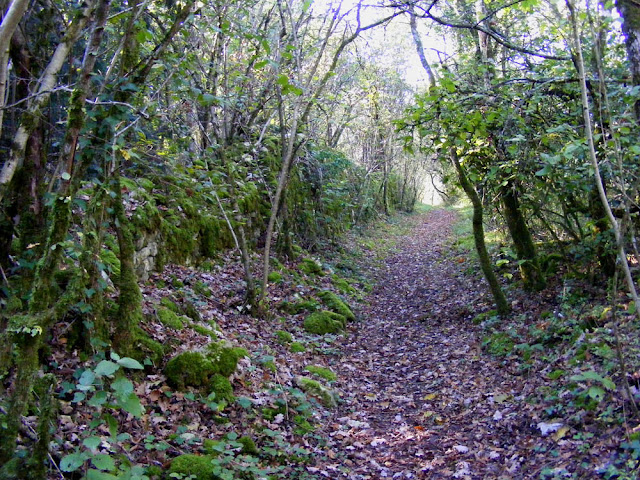 The trail through the woods.

So one fine crisp morning a few days ago (Tuesday, in fact) I drove over to Angles and we set off on foot from Sweetpea's house. We decided to go the indirect route and meandered out of Angles along various old rights of way before swinging back through some woods and ending up at the new reserve. 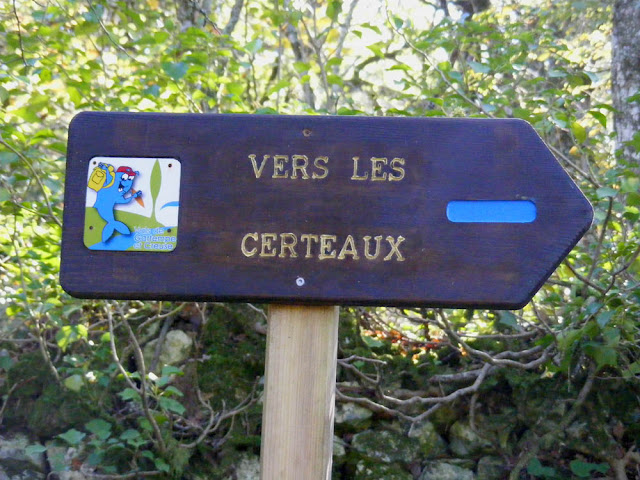 The site just looks like any other smallish field of unimproved pasture at this time of year. It's been mowed for hay and is uniformly shortish green grass. The excellent info board tells you what the real story is though. This is genuine pelouse ie flower rich grassland on calcareous soil. Most importantly, this is pelouse sèche (dry, usually calcareous, grassland), with very shallow topsoil on a south facing site. Although we in the central Loire Valley take this habitat a little bit for granted, in global terms it is one of the rarest and most threatened. A number of the plants which thrive here will grow in no other habitat. This site is home to nearly 15 species of orchids and the very rare Wild Paeony. Of course, where you get a very particular plant assemblage, you also get a very specialised set of insects too. 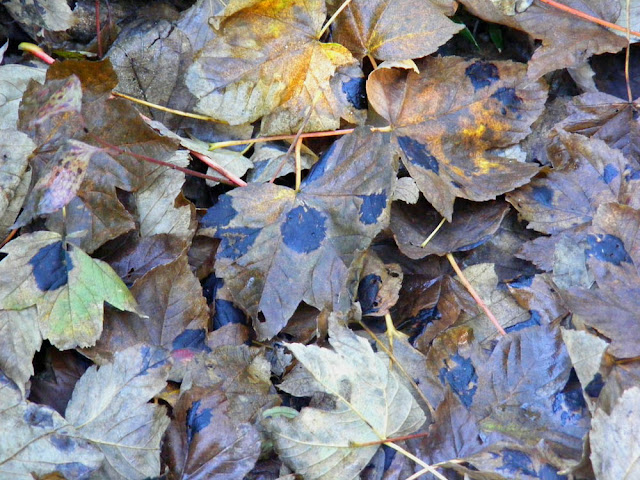 The info board also points out that the term pelouse is used rather loosely by most people, and that what you mow in your backyard should more properly be called gazon (lawn). That's because the plant assemblage, underlying soil and aspect is usually nothing like genuine pelouse, even though they both may look like an expanse of short mown grass. The board also mentions that mowing your lawn (tonte) is different to cutting your pelouse (fauchage). In fact, it is that very regular and close mowing that turns a pelouse into a gazon. Pelouse is only mowed once a year, in the late summer or autumn. 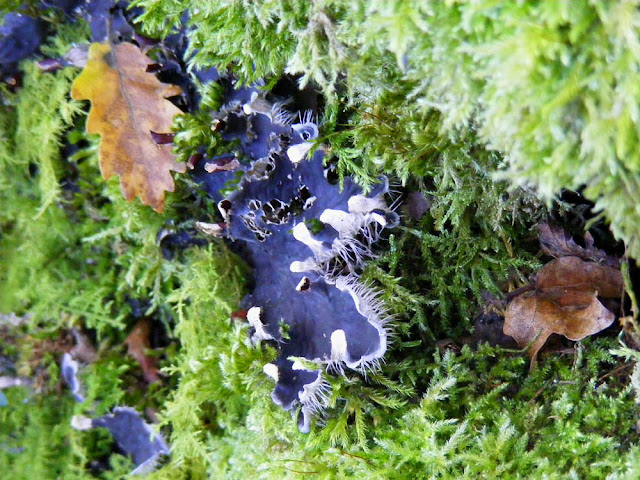 Sweetpea and I were fascinated by this Dog Lichen Peltigera cf canina, growing on a moss covered tumbledown stone field wall opposite the nature reserve. When I first saw it I couldn't decide if it was a lichen or a fungus. Lichens are actually composite organisms, with one of the symbiotic partners often being a fungus, so my confusion is perhaps justified, as it turns out this is a lichenised fungus.

As well as all this good natural history information, we also learnt a new word - vergogne. The board tells us that the plants are rare and threatened -- à ne pas cueillir mais à photographier sans vergogne -- 'not for picking, but photograph without qualms'. 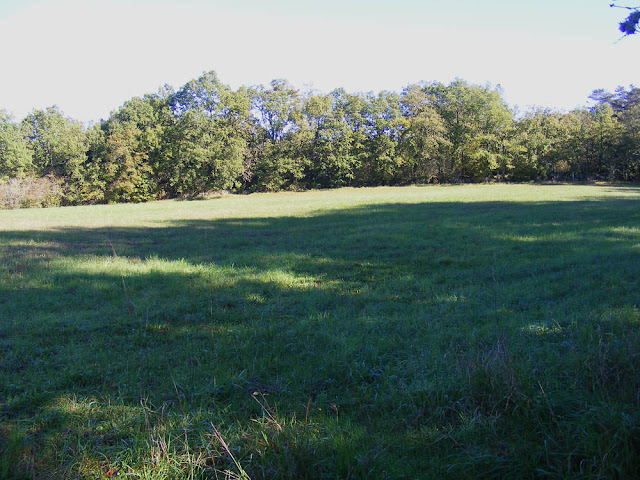 Derrière la Queue du Renard nature reserve in late October - you might never guess what treasures it is nuturing now, to show off in spring.

The site bears the curious name of Derrière la queue du renard ('Behind the Fox's Tail'). There is a street in Angles called la queue du renard, and if you follow it from the village centre it leads you out to the Roc-aux-Sorciers museum. Follow the road beyond that and you get to the driveway of the Chateaux de Certeaux and the new nature reserve. 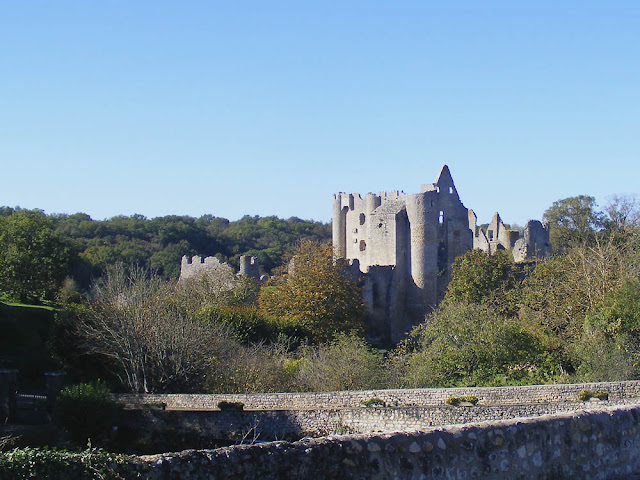 What people mostly come to Angles to see -- the ruined medieval castle on the falaise (cliff).

All in all an intriguing and precious site. I will be sure to be back in the spring.
Posted by Susan at 09:00

Moi et Pollygarter aussi!!
Sounds a wonderfully escapist place from busy Angles in the tourist time too...
Great to see Dog Lichen... haven't spotted it in years. In this situation the "roots" are clearly seen.
Is there anything that lives on the weed Sycamore, other than Tar Spot?

We'll make a visit as well. Not that we'll know the species but we can appreciate beauty and rarity, and will certainly heed the warning 'not to pick but photograph without qualms'.

We've walked some trails around Angles, but not this one.

What a great idea, pity that there are not a lot more like this around. Perhaps there are, but I have never seen anything like it here. Have a good weekend Diane

Another great post! Looking
forward to accompanying you
on your Spring visit.

I'll look forward to your report.
What a pity it's necessary to warn peole not to pick the plants...but necessary it is!

Tim: I deliberately took the photo from that angle so you could see the 'hairs'.

Gaynor: a walk in Angles is never disappointing.

Diane: these pelouses seches are common in private hands, where they often get ruined by being allowed to scrub over.

Sheila: I hope I time it so I get to see the Wild Paeony.

Fly: yes, but there is a real awareness campaign starting in Vienne and around Angles in particular.

What an informative post! I shall now be careful to use the terms "pelouse" and "gazon" correctly.

I'm not at all sure about that pelouse vs. gazon distinction. A pelouse can be made up of gazon, whis is grass.

WHICH is grass... typing too fast.

Ken: They are making the distinction between common usage and scientific habitat categories.

Fraussie: This distinction was something that took me a while to get to grips with, because I was hearing and reading the word pelouse used both loosely and very precisely. Fortunately French field guides do good glossaries and I figured it out. I was very interested to see an info board designed for the general public making the effort to clarify terms that many people will think of like Ken does.

I'm looking forward to the gate being unlocked. Hoping to be there at dusk to witness Horseshoe Bats. Susan is a wonderful guide with amazing observational skills and knowledge. Lovely morning when the rain stopped!

Sweetpea: thank you. I really enjoyed it.