A War Memorial in the Paris Metro 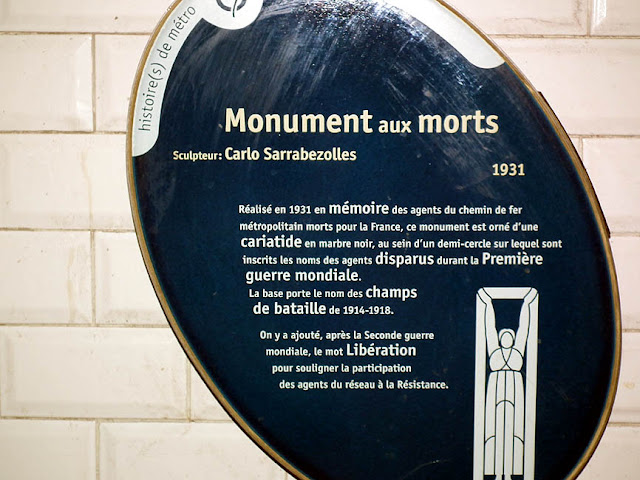 Created in 1931 in memory of the Metropolitan Railway employees who died for France, this monument is adorned with a caryatid in black marble at the heart of a semi-circle on which is inscribed the names of the employees who died during the First World War.

After the Second World War the word 'Liberation' was added, to underline the participation of the employees in the Resistance network. 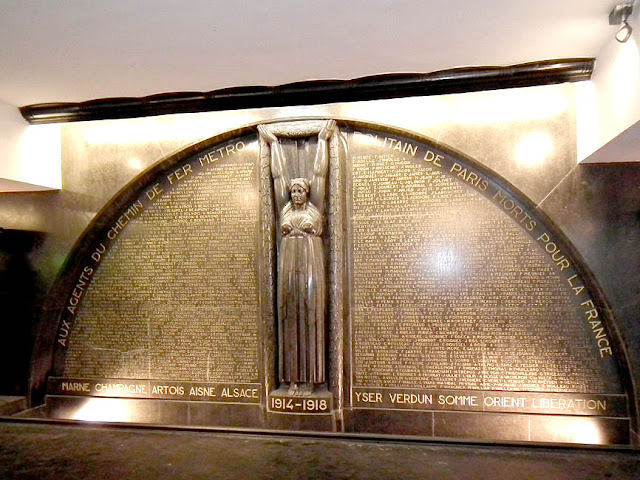 The memorial is in Richelieu-Drouot station.

Tim: it's a striking memorial to an utterly horror filled time. We watched a programme about an excavation of some trenches at Messines the other day, with plenty of original footage thrown in. No one can have survived intact. They deserve our thoughts to be with them.

Susan, just as Tim said, thank you for a “lovely post for a special day.”

Every French family lost at least one loved one in that terribly useless conflict.

In July 2011, the director of the Péronne museum took Ken and me for a tour of the Somme battlefields. It was a very emotional day. You probably know that Péronne was liberated by Australian troops in 1917.

If you have a chance the Mémorial de la Grande Guerre located in the medieval chateau is worth a visit.

My mother's father fought in world war I and died. Three movies had really an impact on me : "A very long engagement", "Joyeux Noel" and "Le grand chemin". It was such a horrific war, I really honor veterans from all wars actually, but WWI is special in my heart. So many soldiers from different countries died in combat and are buried in Verdun; such a waste of human life.
"Le grand chemin" opened my eyes to what really happened.
I love yesterday's pictures of the republican guards. It represents true Paris and France to me. I wish I could have witness that moment.

chm: I did know the Aussies liberated Péronne, and it's nice to see the strong links the museum there maintains with Australia. We would definitely visit if we were up that way.

Nadege: the more one sees of that war the more incredible it becomes that it was allowed to continue. France and Belgium paid a particularly heavy price, but those graveyards speak to everyone, especially the nations directly involved.

Glad you liked the cavalry. I have a real soft spot for mounted troops. I used to see them almost every day in London and it was always a treat.

I agree with you Susan, it really is an impressive and striking memorial. Just so sad that it should ever have had to exist at all...

C&E: yes, I don't think anyone came out of it very well -- except maybe Clemenceau...