Mincing Across the Road* 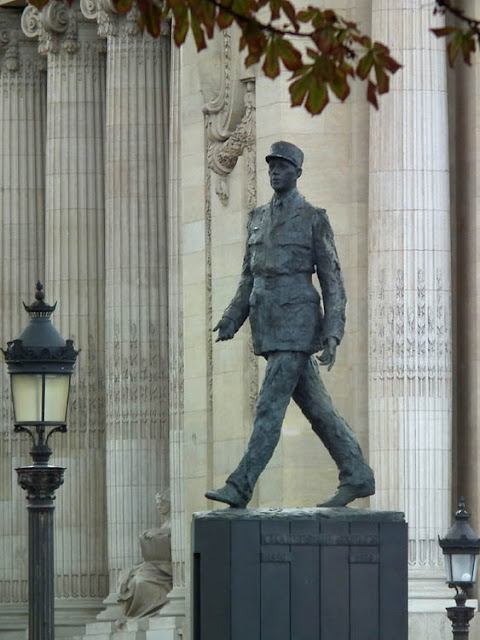 Apparently Charles de Gaulle did not wish statues of himself erected, but in 2000 his family decided to relent, giving permission for this one and several now exist in other countries. This one is on the Champs-Elysées by le Grand Palais near Métro Clemenceau (totally overshadowing the nearby statue of Clemenceau himself, which is disreetly positioned on a rock under a tree on the side of the road near the Métro entrance). 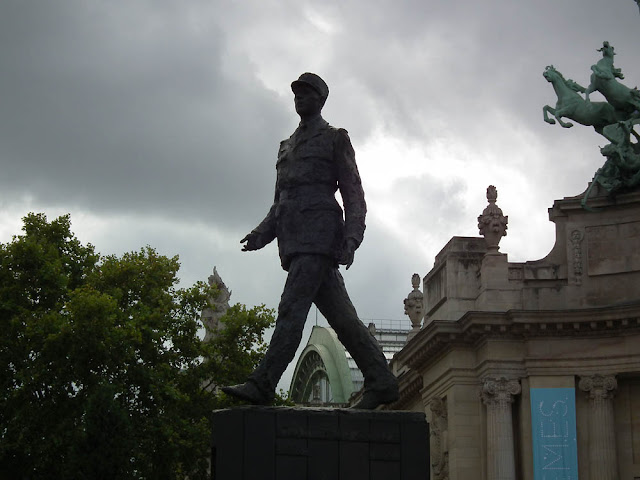 There is an inscription which reads:

Which I would translate as:

They are the opening words of his speech to the crowd on the liberation of Paris, 26 August 1944. 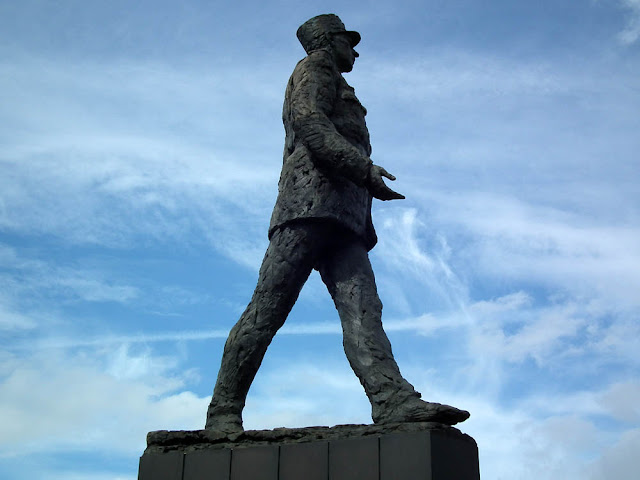 There is no question that de Gaulle was a great Frenchman, who played a vital role as such during the Second World War. I just wonder how much of his reluctance to have a statue is down to his unfortunate pear-shaped figure and how much is down to regrets about Algeria and other colonial wars. Quite likely it is neither of these things -- he was such a patriot that he may have genuinely believed that it was France herself that should be celebrated and honoured, not individuals such as himself.

Believe it or not, these photos were all taken on the same day, within minutes of one another, by Simon in mid-September.

*Thanks to Jonathan Meades this is how I will aways think of this statue. According to a fellow blogger friend, there are three people from French history that you cannot criticise -- Joan of Arc, Napoleon Bonaparte and le Grand Charles. What's the French for fatwah? I may have to go into hiding...

**Usually translated as 'Paris outraged', but I think 'violated' gives a better sense.
Posted by Susan at 09:00

The position of the hands is interesting - is he pointing to the soil of France?

How does mincing come into it?

Ah, yes. He seems to be mincing. He'd be mortified, I'm sure. He looks sprightly, at any rate.

Tim: don't know. I think it's to give a sense of dynamism to the statue.

Carolyn: Watch the Jonathan Meades programme and you will understand.

LJ: I think the somewhat camp posturing is very true to life in fact.

I think the pose in the statue may be drawn from some of the images of him on the day he made that speech and went for the ceremonial walk down the Champs Elysées to the service at Notre Dame which the enemy snipers interrupted (it's on endless loop at the Musée Leclerc/Moulin).

But it was also fairly characteristic of the way he approached people later as well, before he got particularly grand. The not wanting statues thing is a kind of reverse grandiosity as well, of course.

Incidentally, I did wonder if it was intentional that, if you look at the whole collection on that corner (de Gaulle, Churchill and Clémenceau), they all seem to be striding determinedly in completely different directions.

Auty: yes, I thought the statue looked like it was based on photos from that day. I may have to steal your thought about the 3 statues and write a blog post on that LOL -- it will have to wait until I have a photo of Churchill though.

Carolyn, the "mincing" comment is just British snarkiness about the French, I think.

Interesting texture, as if the statue were still in clay. Le Grand Charles and the soil of France?
Do write about the three statues going in opposite directons. From what I've read of them, they likely were. :-)

Ken: Jonathan Meades is snarky about everyone, not just the French :-) He is addicted to aphorisms and I have no doubt is an acquired taste, but he is an always thought provoking and well informed social and historical commentator with an original style of his own. My impression is that he has spent a lot of time here, and likes many things about France, but doesn't see that as a reason to curb his tongue.

Well, "mincing" is a loaded term and calls up unpleasant stereotypes.