Here is a small selection of the fungi we saw in the Foret de Preuilly on 4 November. Colin and Elizabeth joined us and have already blogged about it (twice). 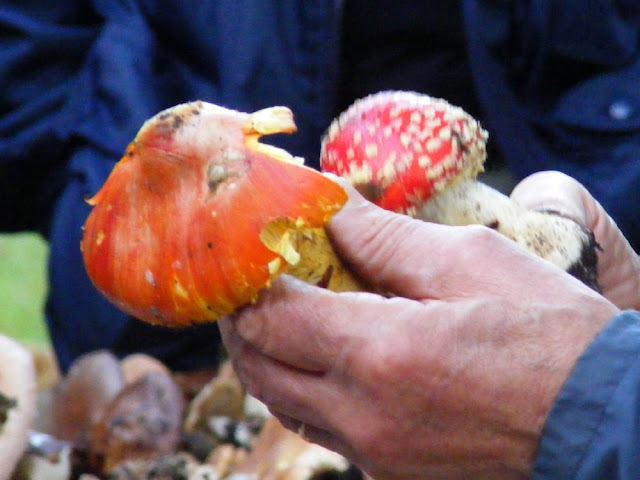 In Jean Bouton's left hand, the highly regarded edible species Caesar's Mushroom Amanita caesarea. In his right hand, possibly the most iconic mushroom of them all, the Fly Agaric A. muscaria, only eaten by thrill seekers and the foolhardy. Don't get them mixed up! 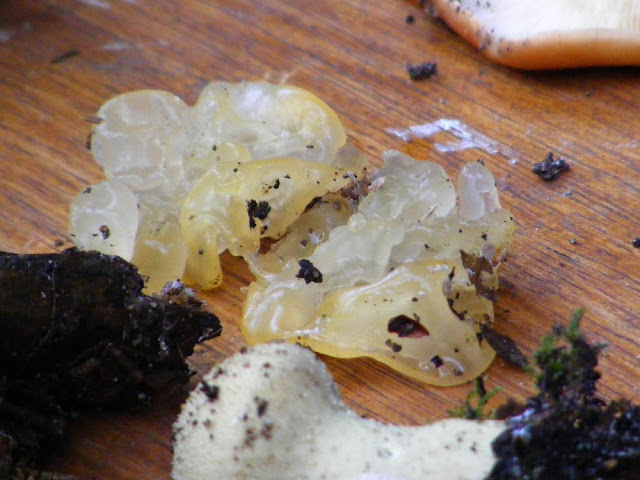 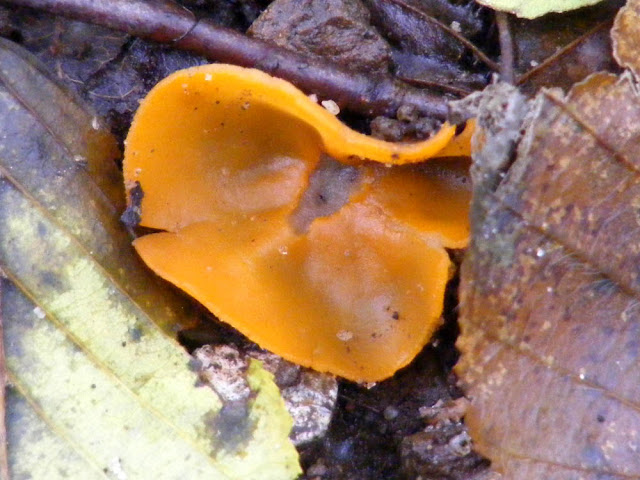 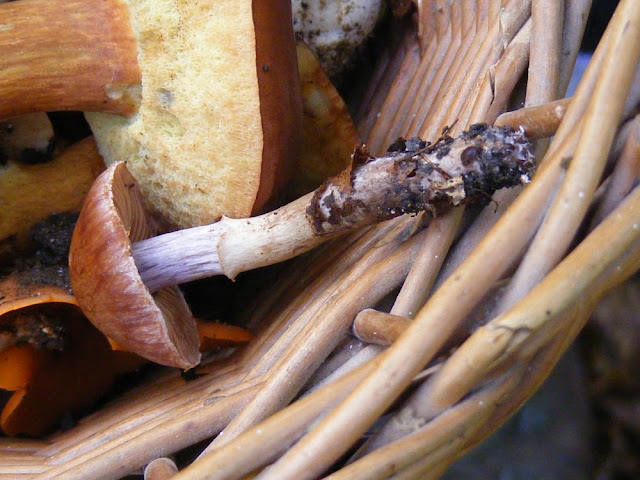 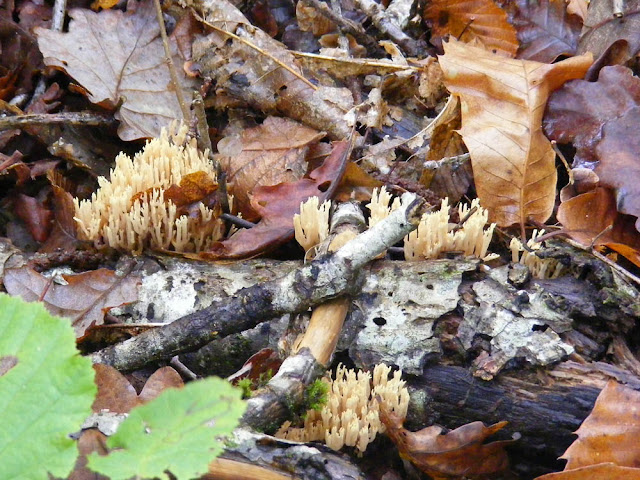 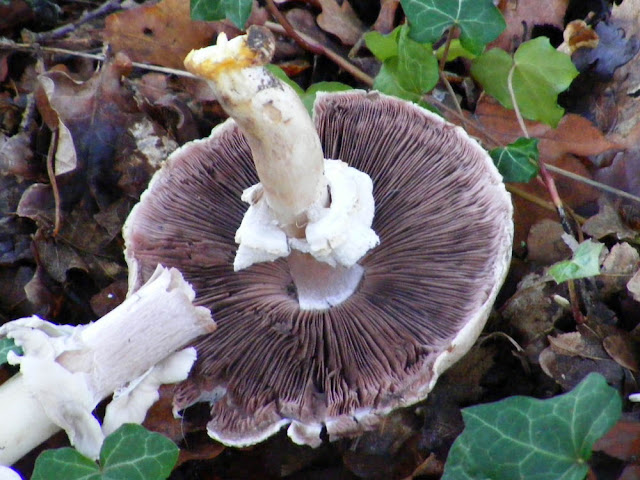 Think this looks like a tasty Field Mushroom Agaricus campestris? Think again. This is a Yellow Stainer A. xanthodermus, clearly showing the strong yellow stain formed when the base of the stem is cut. This mushroom will not kill you, but your digestive system will not thank you for sending it through and will try to eject it as quickly and violently as possible.

Fraussie Grouet, a keen mushroom forager who writes the blog Aussie in France, asked me if I could find out from the experts what their opinion was on cutting or pulling as a method of gathering mushrooms, and so I put the question to Jean Bouton. He said he knew there was two schools of thought, but he would recommend taking the whole thing. His reasoning is that it does no significant harm to the fruiting bodies remaining and you are sure that you can make an identification if you have all of it. For ceps, he thought it was a reasonable compromise to cut them as low as possible, but it wasn't really best practice. Covering the remnants of the cut stem served no real purpose according to him.
Posted by Susan at 09:00

Yellow Stainer doesn't just turn yellow at the base... look out for a tinge of bright yellow all around the rim of the cap. This was my first indicator of the specimen I found at the edge of Niall and Antoinettes' property.

The stem didn't stain, but when I showed the fridge kept specimen to Jean and Jean-Pierre, they both picked up on the 'yellow frill',
although the stem didn't change colour.

Also, it will stain yellow to a lesser degree wherever you cut or bruise it. In a young specimen that hasn't been attacked by flies, this can be a much brighter yellow than at the base.
If you see yellow on a 'normal field mushroom' just avoid it!

Tim: thanks for the extra info.

The chemist said we were to pull...to have all the elements for identification.

Did you find any horse mushrooms...the ones with the smell of anise?

Thank you, Susan, for asking the expert about how to pull up mushrooms. I have never found any Caesar's mushrooms though I've seen plenty of Fly Agarics! I shall have to keep my eyes pealed. The Yellow Stainer is obviously what we found growing in our little wood recently and discarded. We're definitely going to join a mycological group - what a pity yours is so far away!

Fraussie: It is a shame the Association only covers 37. I'll see if I can find out if there is a similar club in 41, but I don't think there is. We have people coming from as far away as Argenton-sur-Creuse and the Brenne to join us, because they don't have any equivalent closer to home.

I think the mushrooms you found may have been Horse Mushrooms Agaricus arvensis. My understanding is that this is the species you find in the woods, whereas Field Mushrooms and Yellow Stainers are the species you get on roadsides and in fields.

The Agaricus arvensis also has an aniseed smell it seems, which ours didn't so I guess we'll have to keep searching.

Fraussie: I'm often handed mushrooms to smell and quite frankly, can rarely pick the supposedly diagnostic odour. Some people just can't, and some mushrooms don't smell as much as others, even within the same species.