Probably our favourite of the big châteaux on the tourist route is Cheverny. It's 17th century, so later than its rivals, but it has one great drawcard, quite rare amongst historic buildings, and particularly so in France. A major part of the interior decorative scheme is exactly contemporary with the building. Added to that, the building was completed in a single phase, and the result is a harmonious and classical exterior with a lavish and unrestrained interior.

Henri Hurault, the general and financier who built
Cheverny in the reign of Louis XI. 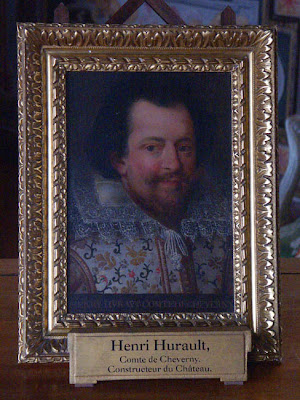 Henri Hurault, the man behind the creation of the building itself, looks a chirpy sort of chap, rosy cheeked and a bit mischievous. In fact, he was presumably rather a scoundrel, as the château was seized as punishment for his fraudulent activities. Henri II presented it as a gift to his mistress Diane de Poitiers. Practical businesswoman that she was, she promptly sold it back to Hurault's son. Thus, remarkably, with the odd hiccup here and there, it has stayed in the family ever since. The famous pack of hounds all have the 'V' of Vibraye clipped into their flanks and the current owner is the Maquis of Vibraye, a title the family acquired in the 19th century. In the corridor off which the private apartments are accessed hang numerous portraits of family members through the ages, all of them seeming to have inherited Henri's amused and benign expression. It is very appealing.

The richest and most sumptuous of the rooms open to the public is the King's Bedroom, hung with 17th century tapestries made in Paris and depicting the story of Odysseus' return from the Trojan War. On the highly ornate ceiling are paintings of mythological subjects by Jean Mosnier, an artist from Blois who is responsible for all the ceiling decoration and wall panels in this part of the château.

The King's Bedroom, with me gazing in
wonder at all that gilding. 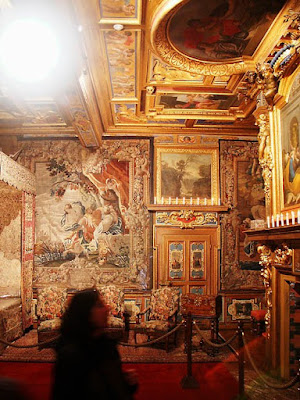 The fireplace in the King's Bedroom
(la Chambre du Roi). 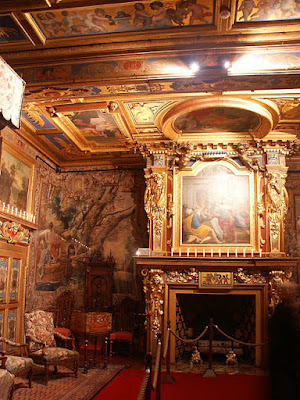 And if that wasn't enough, the Château has two more major attractions. The first is the pack of hounds which are on full view to visitors. They are big dogs and although most of the time just enjoy being together, there is a fairly constant jostling for position and rank to remind you that these are pack animals.

Plus, in a building near the kennels there is a museum dedicated to the Adventures of Tintin. Cheverny served as the model for Moulinsart (Marlinspike Hall) in the much loved comic strip.

Simon, inspired by his recent dose of Tintin comics,
has created this homage. 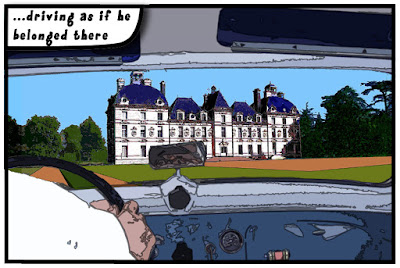 Clever chap, that Simon.
A very interesting post.
Wish I could drop everything
and go over for a tour in
Celestine right now.

Did Kerry and Steve get to Cheverny on Friday, before they left Saint-Aignan to come visit you? I hope they did.

Nice post. I like this chateau as well. One unusuaul aspect is the building is rather "thin" - only one or two rooms deep, so it is smaller than it looks when viewd from the front.

Digenes. One room deep, with a corridor running along the front