An old building like ours contains many mysteries. The back of graineterie displays several features that make one curious as to why they appear as they do and how they relate to the past and each other. Having had work done at the back of the house has meant that we've had the opportunity to stand around pondering these mysteries and theorising.

The back of the graineterie 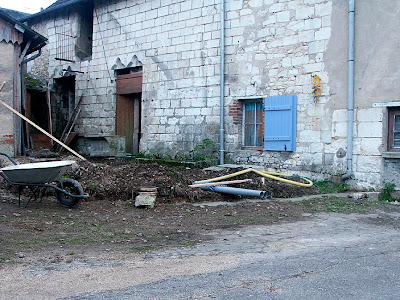 Looking at the back of the building from left to right, one sees a neat, well constructed corner of substanial blocks of cut stone, but immediately adjoining the corner stones is a section of rubble wall (Mystery #1). The neat cut stone resumes and there are two ground floor openings with carved lintels (Mystery #2). A string course, dividing the enormous hard stones of the foundations / vide sanitaire from the softer tuffeau of the wall, runs between the two openings, but does not continue beyond the one on the right (Mystery #3). There is a third, smaller opening on the ground floor, constructed of a hodge-podge of materials. The section of wall above it appears to have collapsed at one time and been repaired with no regard for aesthetiques (Mystery #4). Once again, compounding the mystery, the neat, well constructed corner and end wall to the building is immediately adjacent. (Beyond the downpipe on the right is a separate building, part of the house, tacked on, probably in the 19th century.) 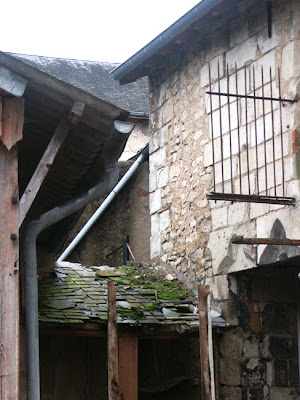 Mystery #1: is the rubble section where a wall set at right angles to the graineterie once stood? If so it was substantial, being as thick as the existing graineterie walls and running the full height. It is quite likely that the party wall with the neighbour's courtyard, the dunnies and the stable block (garage) are all later constructions, but I am still puzzled by why the rubble wall does not appear to have run quite in line with the end of the graineterie, but was set back slightly – which seems to be what the neat cut stone corner indicates. 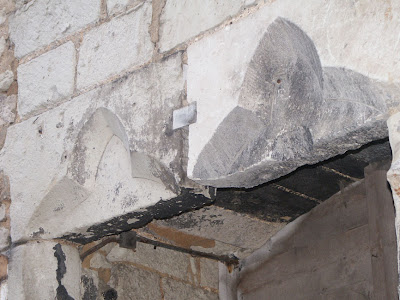 Mystery #2: these openings appear to be original. There has been some discussion as to whether the carved stones were made for this building or are ancient salvage. Expert and learned opinion leans toward them having always been in this position, but there is still something odd about them. At the moment they present as a window and a doorway, but why are they at the back of the building? They are grander than the simple pointed arch that is the only original opening in the front. Why are they hidden away around the back? Was the orientation of the building once north, not south? And there's another thing – the carved stones are the lintels of the openings, but they are joined in the middle, not a single piece of stone. After much beard stroking and discussion with architecturally interested friends (special credit to John here), we've come to the conclusion that both openings once had mullions ie a vertical carved stone support up the middle of the opening, and that they were both windows. At some stage, someone has come along and blythly removed the support for the carved lintels. The only reason they have stayed up is because the real weight of the wall is actually supported by immensely thick round arches behind. This theory does, however, leave us with another mystery to solve. Why are the openings not placed symmetrically, and why was there no door on this side of the building? 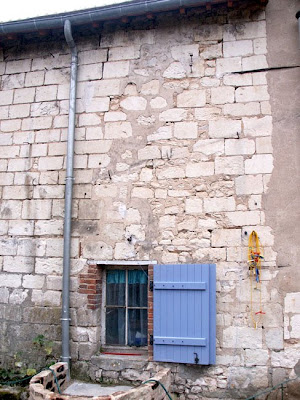 Thus we come to Mystery #4: what if there was once a door where the small window is now, with matching carved lintel arrangement? What if this doorway was altered in the same cavalier fashion as the windows, but because it was perhaps a bigger opening or in some other way different, removing some of the supporting stones caused a collapse? (Credit here to Simon for this theory.) Perhaps the wall did not actually fall down, but sagged alarmingly and was jacked up again as best they could. This might explain the intact corner and end wall as well as the oddly irregular, but not rubble, appearance of the wall above the window. Intriguingly, the left side of the window surround includes three stones with carved corners which exactly match the surrounds of the other two openings. Did these stones survive the collapse and remain in situ? Was the wall now too dangerous to rebuild the door, so a smaller compromise opening was constructed out of anything to hand, and one of the original windows became the new doorway?

And for those of you wondering about Mystery #3: I've got no idea why the string course does not continue, but there is no evidence that it has been hacked off or removed.

A very intriguing story Susan.... full of mystery.
Are you not in the ACT with Simon???
Leon

Fascinating stuff. And I suspect you will never know the answers to some of your mysteries. It's good to let your imagination loose and ponder on such things.....if only we could just climb into our time machines and travel back to see exactly what was going on, 50 years ago, 100 years, 200 years and in the case of your grainary - more than 600 years I believe!!
The mind boggles when thinking of the amount of time that has passed since your building was built.
If I ever win the lottery, I will buy one of those time machines !!