An overview of the cemetery

Recently we had a few days in Paris, and I arranged to meet a contact, Pierre, who lives and works very close to Montmartre Cemetery. He very kindly took time out from his translating work to give us a guided tour of the Cemetery. Not perhaps as famous as Père Lachaise, it is nevertheless the final resting place of many names you will recognise, and one can spend a fascinating couple of hours looking at all manner of monuments and tombs. It is still an active cemetery, and plots are expensive to buy and must be maintained or they are resumed. Pierre has spent his lunch hour here almost every day for many years, mostly photographing and observing insects, but also just enjoying a wonderful hidden peaceful place. He told me that when his children were babies, he would bring them here for their afternoon bottle because it was somewhere calm where they would not be disturbed or distracted. Curiously, the cemetery only has one entrance/exit, and I think this is what deters many locals from using it more like a park rather than the fact that it is a cemetery. It is not somewhere you use as a pleasant shortcut, it is necessarily a destination in its own right. 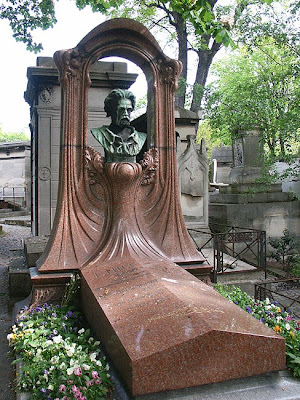 One of the first graves you come across is that of Emile Zola, the writer. He died in 1902, but a few years later, his body was moved to the Panthéon to join other national heroes.

Like the big London cemeteries such as Kensal Green, the one in Montmartre is a 19th century creation which came about in response to a need to improve conditions in the capital. Because of its location, many of the occupants are the artists, writers and performers that the area is famous for. 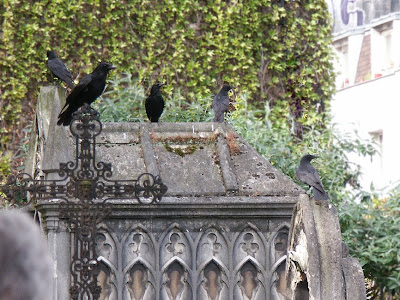 A group of resident crows gather on a Gothic Revival tomb. Being crows, I imagine they are entirely aware of the effect they produce. 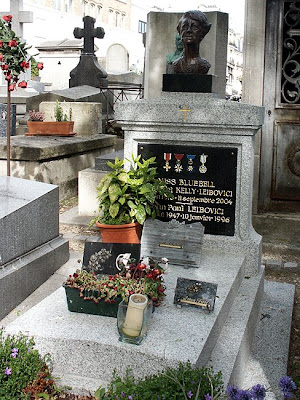 The tomb of Margaret Kelly-Leibovici, who founded the Bluebell Girls cabaret troupe. 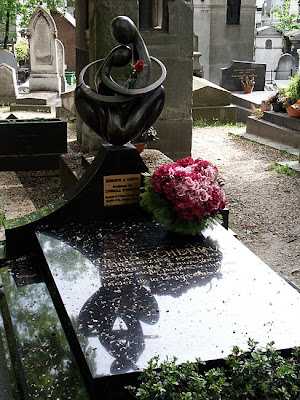 The grave of Ludmilla Tcherina, ballerina, sculptor and painter. 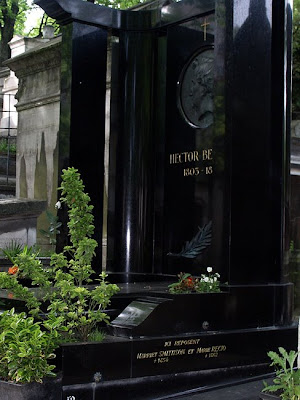 The composer Hector Berlioz, buried with his wife and his mistress. Simon thought this showed real style, but in fact, Marie Recio did become his second wife. Berlioz apparently wrote to his son that he had lived with her for so long he felt obliged to marry her after Harriet Smithson's death. It is apt that he is buried here, as he seems to have spent many hours walking about in the cemetery, which was close to his home.