A Different View on May 8

Being Australian visitors to Preuilly it was a privilege to attend the Victory in Europe (VE Day) Service on 8th May. We were struck by some of the similarities and differences to our ANZAC Day service 25th April at home in Pittsworth, Australia (a small country town not unlike Preuilly). We, that is veterans, serving military personnel, school children and civilians wearing relatives medals and a band assemble at the end of the main street and we march to the War Memorial two blocks away, being politely applauded by the general public lining the wide street. All vehicular traffic is blocked off during the march and the service. At the War Memorial the marchers line up in associated groups and the Mayor and a visiting serving officer address the assembly, a veteran recites a set piece of poetry:

"They shall grow not old, as we that are left grow old:
Age shall not weary them, nor the years contemn.
At the going down of the sun and in the morning
We will remember them."*

And the bugler plays the Last Post. A minutes silence is held and serving officers and other ranks salute and wreaths are laid. Revaille is played and then individuals, organisations and sporting clubs present gift books which are distributed to retirement homes or other charities, badges are sold to the public to raise money for widows and children of veterans.

The main difference with the VE Day service is the reference made to remembering people other than service personnel who lost their lives due to war: civilians, resistance fighters, deportees, victims of genocide and those upon the sea. As Australians, whose country has never had enemy troops on our soil (some cities were bombed by the Japanese) it is hard for us to imagine just what it was like to live and survive in an occupied country.

We go on from here to Normandy and the Somme before we fly back to Australia. At Villers Bretonneux we will visit the Australian War Memorial and the Commonwealth War Graves where so many of our grandparents generation are buried on French soil as a result of the fighting to liberate France in World War I.

*from "For the Fallen" by Lawrence Binyon 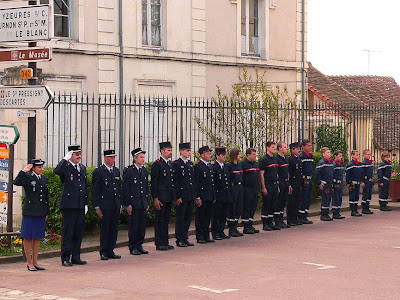 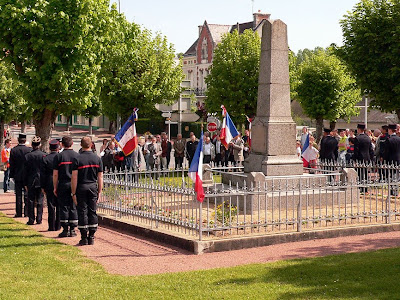 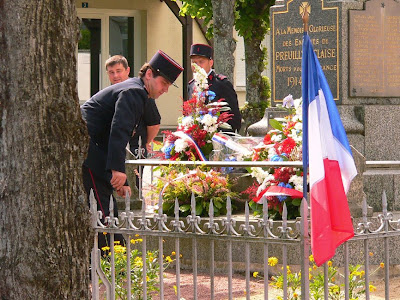 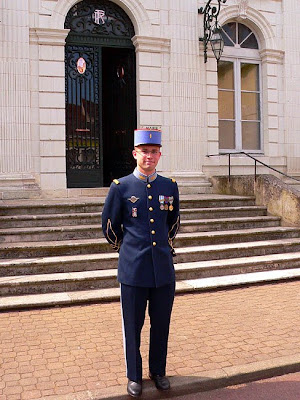 thanks for this. i hope your tour of the battlefields in france is consoling and impressive. (nice doesn't quite seem like the right word.)

I know exactly what you mean. I found myself saying 'nice' just recently with regard to a proposed visit to a site of conscience. The reality is that it is a sobering experience, not standard holiday fare, but it is 'nice' to acknowledge what these people went through and honour their memory.
Susan

It's a real pleasure to see myself in uniform on your blog.

Benjamin, the man in blue uniform.

Benjamin! Hi! I hope we get to see you again in Preuilly, and you do look dishy in your uniform :-))
Susan