The 8th of May is "Victoire 45", a public holiday in France celebrating the end of the 2nd World War. The day is marked with celebrations and parades throughout France, and in Preuilly sur Claise it is no different.

The people of Preuilly meet at the Mairie at 10.45 for a short series of speeches. Badges are bought (even by Australians) with donations to the veterans association before the parade is bought to attention.
Susan's Father buys a veterans badge. 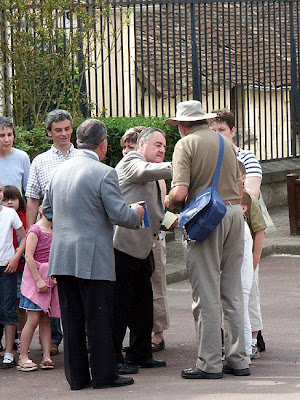 The whole ensemble then parades down Grande Rue and across the Claise, parading behind the veterans and Pompiers to the war memorial 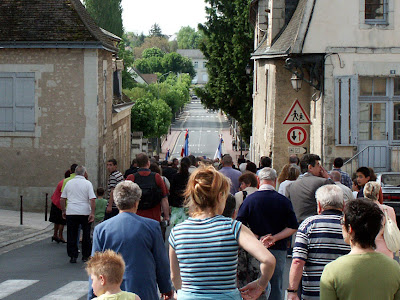 Here a short speach was made by the new Maire giving thanks for the sacrifices made by previous generations and remembering those in the armed forces, the resistance, civilians, those who were deported and victims of genocide. There was a short wreath laying ceremony and a minutes silence before the Marseillaise was played and the parade made its way back to the mairie. 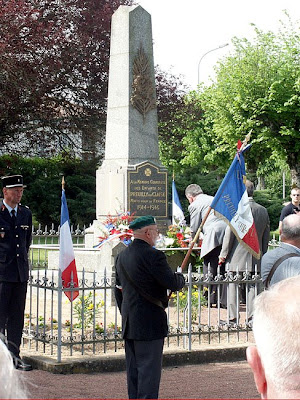 After the parade the population were invited to a reception held in the salle de fetes and hosted by the Maire. We were made to feel really welcome and special by everyone we met, and had some interesting conversations with members of the new council.

It is amazing how many people in France have some sort of connection with Australia and were wanting to tell us about it. 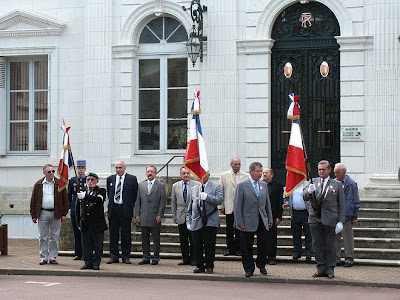 This was a really quite moving and interesting experience. We in Australia sometimes struggle to realise how much a war affects the lives of a whole population when it is fought on their soil. We should consider ourselves very lucky that it has never happened to us.