Last year "we" decided it would be a good idea to turn over the soil in the garden. This idea was soon abandoned when we discovered that the whole garden had at some stage been gravelled.

We also discovered (by dint of hitting it with a full bodied blow of a pick-axe) that we have a mystery area of cobbles. These cobbles relate to nothing else in the property and appear to serve no practical service so we have decided to remove them.

The cobbles can be seen half buried under the table. Photo taken in May 2007 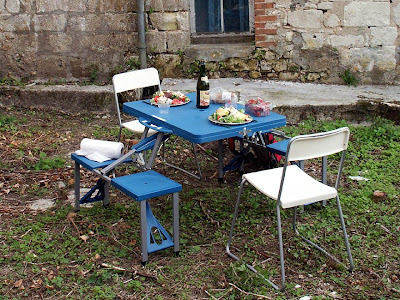 I have bought myself a high powered SDS hammer drill on which I can turn off the drill action. This makes a quite efficient (if somewhat lightweight) jackhammer with which I can break up the cement the blocks were set in.

I have made some progress with removing the cement and loosening the stones from the ground. One thing I have NOT made much progress in is removing the blocks. The block in the top left of the photo below is a 12 inch (30cm) cube of granite and is one of the smaller stones. 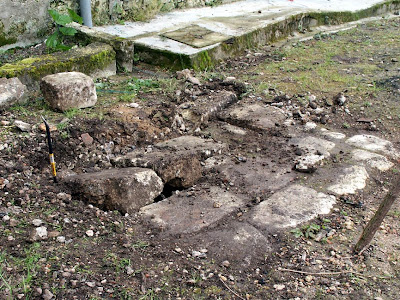 If anyone is feeling strong, you know where I am...

Yesterday (Friday) was a much better day, so I was able to complete digging out the stones. I will post some more photos once I have regained my strength.

You are saving those stones, right?

They are part of my nez collection of stones for doing useful stuff with.