For a while now, Susan and I have been intruiged by a damp patch which appears on the wall of our house at irregular but frequent intervals. 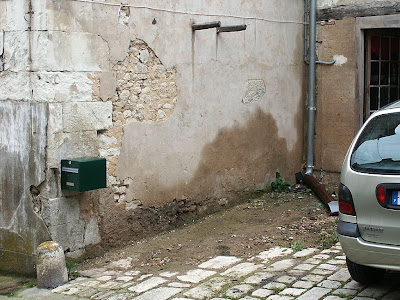 Damp is a frustrating thing - it appear and disappears, and there are many causes. One patch of damp may be caused by a number of conditions, so even when you have removed one cause there may still be work to be done.

I did discover with the aid of a hammer that the lime render at the bottom of this part of the wall had been damaged in the past and had been repaired with concrete. This I have now chipped away, the theory being that the concrete was forming a barrier holding the water in. 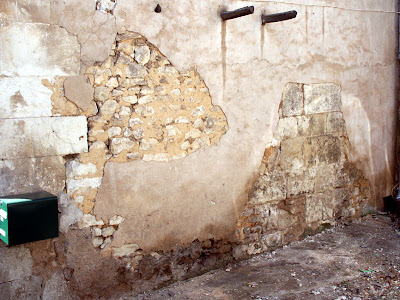 I have a feeling this is not the end of the story of this particular patch - there is a concrete surface next to the wall which probably isnt helping either, but I hope I have at least made a start. This problem appears only cosmetic as the inside of the wall doesn't appear to have a problem, which is A Good Thing.

Your architect speaks: You are right to remove the portland cement render and re-expose the rubble wall. These wall should be pointed rendered with a porous mortar, usually a lime mortar. The lack of any horizontal damp membrane originally assumed a. lime mortar and wall paints, b. continuous house occupation, c. fireplaces used in each room, d. draughty windows and doors. These last are important as the excessive air flow ventilated any dampness away. Touraine tuffeau walls (which are very absorbent) will always have rising damp patches somewhere. Internally, if there is a seemingly impossible appearance problem, the best way is to build a rear-ventilated vertical impervious membrane and render over that. As the rising dampness cannot the 'wick' away into the little saturated void, the damp seem to have disappeared. In London the membrane is called 'Newtonite', but there are many manufacturers and certainly one in France.

If only we could afford you :-)
Thanks for putting this in your usual clear and succint way. It's always a bit scary being interventionist with the house, even when we know the theory. I am certainly quite conscious of how often people these days stop up all the draughts and what a mistake that can be with regards to interior condensation build up and the wicking process.
Susan