The News and Weather

Normally, today being Thursday, you would be looking at three themed but unexplained photos.

However, as I am in Preuilly, and the médiatheque is open on Wednesday afternoon, it's time to catch up with the news while it is still marginally fresh:

Not much has happened in Preuilly this week. I did hear a police car with its siren on Monday, and there was a quite noisy storm on Sunday evening, but it was all noise and light and little rain. On Sunday John and Jill paid a state visit to Chez Moi, inspected the house and then invited me to dinner (with the offer of use of their bathroom) on Monday. Bengt appeared with the happy news that his car is now registered in France (It wasn't only us having problems) and I saw Anne and J-P on my way to the boulangerie.

Susan's friend Chris arrived on Tuesday with her husband Terry for an inspection tour. Chris and Terry have restored houses and pig stys in the Auvergne, so could see what it is we are trying to do. Anne arrived and invited me to drinks that evening, which was very pleasant if a little boozy.

Wednesday we had weather. Hail, rain, thunder, wind, sun - and all before lunch! This stopped my current project (more of which on Saturday) so I went shopping and then lazed. 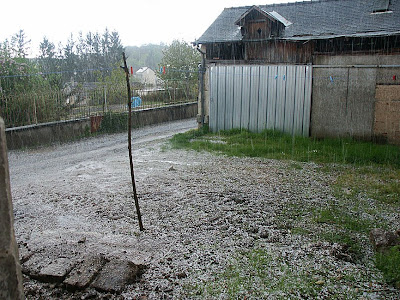 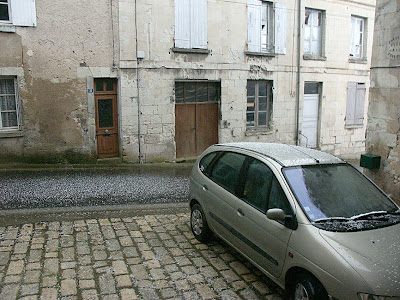 So - that is this week so far. There is a goose Fair in Martizay today, and a vide grenier on Friday I might pop in to have a look at. Saturday I have to clean the house (a constant battle when you're dealing with walls of bare limestone blocks that are still de-humidifying) because Susan arrives on Sunday.

I have also had the phone reconnected. This involved a visit to Chatellerault and a phone call or three to the France Telecom English speaking line. The man in Chatellerault said I had the same number, the France Telecom English speaker said I had a new number and had to pay more money. I had been told to expect the phone to be connected on Thursday, then on Friday. It didn't happen. Then on Tuesday, while I was working up the energy to go into Chatellerault again (and while I was in the WC) the phone rang, and it was France Telecom asking if I wanted the internet connected. Interestingly, I have a new number (I had to ask the man on the line what number he had called, which bemused him) but haven't had to pay more money - yet.

In the Sates it cost more money to disconnect your phone and reconnect it than pay the basic subscription, and in the process you might lose the phone number your friends and relatives rely on.
In Paris, I keep my subscription all year round, just in case. I just connect with Orange's "Internet à la carte" for the time I stay there, and cancel when I leave.

It's interesting that you have to go to Châtellerault to see the France Télécom people. Isn't that a different département from Preuilly? In Loches, my friends who live in the 37 were told it wouldn't be a good idea to go to the France Télécom boutique in Romorantin in the 41.

Of course, now they have closed the France Télécom boutique in Loches. I think the closest one is in Tours (in 37). We're in 41, so we go to Romo when we have to...

Interesting you should say that Ken - this time around we were told that we could not pay the bill at Chatellerault, when we have in the past. You are quite right that Chatellerault is a different département - and a different région even - Vienne (86) in Poitou-Charentes. FT operates in mysterious ways - I guess we will eventually sort it out, by trial and error mostly.
Susan