Hover Flies, or Flower Flies, as they are known in North America, are enormous fun to watch. As the name suggests, they hover, usually at a height between 50cm and 3m. They are quite visually oriented, so some of the males who hold territory will shimmy over to inspect you eye to eye if you enter their territory. They are not wasps and cannot sting or bite. They feed on nectar, and many species have larvae which feed on aphids. A recent British biodiversity study of urban gardens has revealed that Hover Flies are the second most numerous group of flying insects in the garden (after parasitoid wasps). 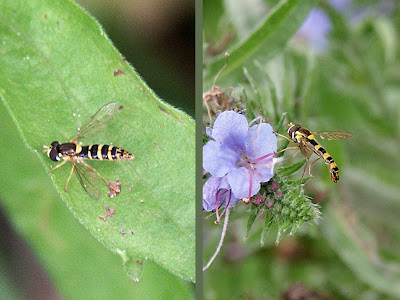 The photograph above shows the male (right) and female (left) of Sphaerophoria scripta, taken near Yzeures-sur-Creuse. Australians may recognise the plant the male is visiting as Patterson's Curse, otherwise known, in Britain, as Viper's Bugloss. In the French field guide this Hover Fly is described as 'corps étiré, très svelte, face brillante, jaune, à callosité médiane foncée. Mésonotum à bandes latérales jaunes qui s'étendent jusqu'au scutellum jaune mat' (body elongated, very slender, face shining, yellow, with dark facial stripe. Thorax with yellow lateral lines which extend to the matt yellow scutellum). They range in size from 9-12mm, with the males, unusually for flies, being longer than the females. This slender little fly is very common and in some years migrates long distances - the French population boosting the British from March to October. It likes open areas where the adults visit flowers and the larvae prey on aphids, so do encourage them in your garden as pollinators and pest controllers. 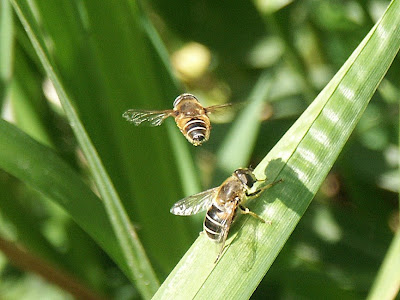 Above, this photograph shows a courting pair of the big Honey Bee-like Hover Fly Eristalis interruptus. The fly on the leaf is female, with the hopeful male hovering above. He is both waiting for a signal from her that mating may commence and guarding her against other interested males. It is not uncommon to see males stacked up like planes in holding patterns above a female. My French Guide des Mouches says that les éristales are 'syrphes ressemblant à des abeilles, aux yeux unicoloures velus, nervure r4+5 profondément échancrée au-dessus de la cellule R5, cellule R1 fermée, antennes plus courtes que la tête, arista velue (Drone Flies...Hover Flies resembling bees, the hairy eyes uniformly coloured, the 4th/5th radial vein on the wing deeply indented above the cell R5, cell R1 closed, antennae shorter than the head, arista hairy). They are 8-11mm and common on flowers from March to October, especially umbellifers. The larvae are known as rat-tailed maggots and live in water high in organic matter - sometimes to the point of being polluted, especially by large quantities of rotting plant material or manure. This photo was taken at Chaumussay on the edge of the river in amongst the Yellow Iris.

The naming of names:
Sphaerophoria scripta - 'sphaerophoria' indicates 360º vision; 'scripta' indicates something written (probably a reference to the yellow line down the side of the thorax).
Sphaérophore notée - the French name means the same as the scientific.

Viper's Bugloss or Patterson's Curse - 'bugloss' = 'ox-tongued'. The leaves are rough like an ox tongue, and the seeds look like a viper's head. Patterson is the name of the family who supposedly introduced the plant to their Australian garden, only to see it take over acres and acres of grazing land. The upside is that the apiarists love it, and protest vigorously when eradication programmes are mooted.
Echium - 'viper'. Using the principles of sympathetic magic, because the seeds look like vipers' heads, the plant was considered to be a cure for snake bite.
Buglosse ou Vipérine - 'ox-tongue' or 'viper-like'.

Eristalis interruptus - 'eristalis' = 'very troublesome'; 'interruptus' = 'interrupted' - in scientific names this generally denotes a marking that looks like a broken line, but I can't figure out what feature the name refers to on this species.