There is a large family of flies called the Tachinidae. They are parasitoids of caterpillars. Having tachinids in your neighbourhood is a good thing. It means your population of moths and butterflies is healthy enough to support these parasites. 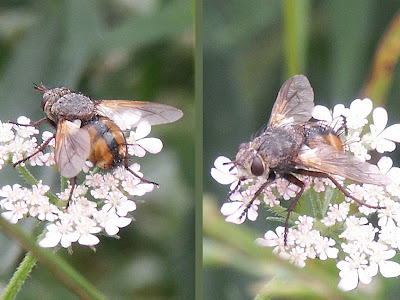 This one is a female Tachina cf magnicornis, just outside Yzeures-sur-Creuse. Tachina spp are big fat bristly flies, but many Tachinids are very much smaller. This species is described in my French field guide as 'robuste, à pilosité grossière sur le corps', between 12-15mm long, flying from mid-April to October and using Noctuid moth caterpillars as its hosts. Umbellifers, such as the Hartwort this one is visiting, are a good place to see them, as they all love to feed on these flat open flowerheads in the sun. You will especially see males in this situation, as, in common with most insects, male Tachinids don't really have much to do. Females are occupied in finding suitable hosts to lay their eggs in, but males, once they have mated, have nothing further to take up their time, so they hang around guzzling nectar - until they die of old age ( a lifespan of a couple of months) or they get eaten by a bird.

Chris Raper runs an excellent website on Tachinids and is extremely generous with helping you identify them or answer any other questions you may have about them. He's pretty good on parasitic wasps as well (Ichneumonids). If you want to really make friends with him, catch him a few specimens. Tachinids are in general very common but we have surprisingly little knowledge of many species' ecology, so making a few observational field notes about habitat and behaviour and catching specimens for accurate identification by an expert like Chris is a very valid scientific activity. The reason the one in the picture is only 'cf magnicornis' is because I didn't collect the specimen and there are several very similar species and these photos were not sufficient for a definitive ID. T magnicornis is distinguished most reliably from other similar species by differences in the facial bristles. The 'cf' inserted in a scientific name indicates that the specimen is either the species named or a closely related species. See a discussion of the use of 'cf' in Wikipedia - binomial nomenclature.

Hartwort - 'hart' = 'deer', 'wort' = Old English for 'plant', its use now generally implies the plant had a medicinal use, pronounced 'wert'.
Tordylium maximum - 'tordylium' is the Latinized version of the Greek 'tordylon', which is the word for Hartwort; 'maximum' = 'greatest'.
Le Grand tordyle or le Tordyle élevé - 'tall hartwort'
Posted by Susan at 10:00

Wow!
I checked Wikipedia for cf. since I didn't know its use in binomial nomenclature. Still, it's not very clear how I should use it with plant names. For instance, there's a tiny plant, that I'll send later, which I'm sure is a Cryptantha, possibly Circumscissa. There are oodles of Cryptantha and I am at a loss to know which one it is. So should I write it this way: Cryptantha, cf. Circumscissa?
On the other hand, I have another plant that looks like Cryptantha, except that it has four petals and all Cryptantha sp. I checked have five. Should I write: ? cf. Cryptantha or what?
I'll send both plants at the same time.
In addition there are several plants I am yet unable to identify. I'll e-mail them for your identification.

cf is used more and more, as people work with photographs to identify species on forums like BugGuide. This often leads to the situation I had above, where the critical feature simply was not visible, but a number of other characters added up to this specimen most likely being T magnicornis. To use cf properly you need to be certain of the genus, and fairly sure of the species, to the extent that if it is not actually the one you nominate, it will be a closely related, very similar species.
I'll try and ID your plants, but I don't have any resources for North American or desert plants, so I might not get very far with them.
Susan