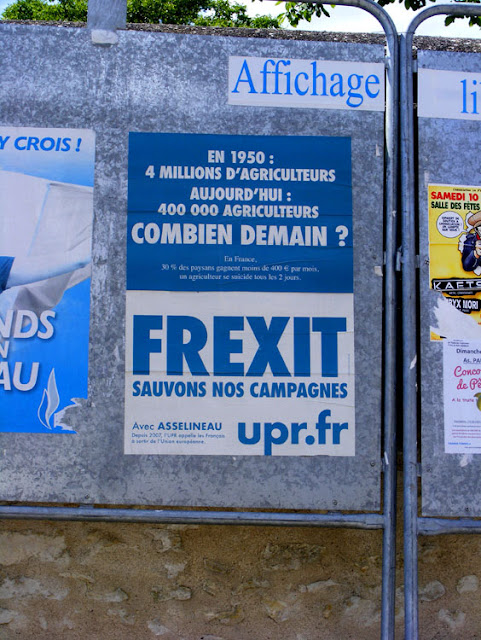 Frexit posters have been appearing all over the place throughout the month of May. This is because François Asselineau has been working on raising his visibility.

In 1950:
4 million farmers
Today
400 000 farmers
How many tomorrow?
In France
30% of agricultural workers earn less than €400 a month
A farmer commits suicide very two days
Frexit
Save our countryside
With Asselineau
Since 2007 the UPR has been calling on the French
to leave the European Union

Since the general opinion is that French farmers do extremely well out of the EU, this last bit will make quite a few people's eyes roll, and it is unclear how exactly leaving the EU solves the other generally acknowledged problems of low prices for produce, seasonal workers and increasing average age of farmers in the agricultural industry .

The UPR is the political party that Asselineau created to promote his particular brand of ultra right wing conspiracy theory based souverainety. The name translates as 'Popular Republican Union'. The mainstream media (known as the MSM if you are a conspiracy theorist) thinks he is a joke.

He ran in the 2017 presidential election as a single issue Frexit candidate and gained less than 1% of the vote. He is such a right wing souverainist that he regularly has a go at Marine le Pen for being too soft on issues such as globalism, the EU, the USA and France's involvement in NATO. According to him, his lack of success in the public sphere is due to the big political parties colluding with the media to manipulate the system specifically to ensure he fails.

According to a 2016 survey 61% of French people have an unfavourable view of the EU. However, only 33% say they want to leave. Most want to be in a position to reform the institution from within.

Anyway, Asselineau has been busy recently organising a Frexit march in Paris at the beginning of the month. You will not be surprised to learn that according to him it was a major event that the MSM ignored. He also managed to get himself on the radio, to be interviewed at length on a popular national current affairs programme.

From what I recall, the larger farmers - cereal producers in particular - were very keen on the CAP. General anti EU feeling was quite strong, though it was also an area where the FN presence was considerable.

Precisely. If you are a big cereal farmer who's taken over the neighbour's land you are raking it in. If you are a poor little market gardener you get bugger all. We have pockets of FN support, but overall it's fairly pro-EU (at least in terms of staying in) and anti-FN here, especially in Preuilly itself, which is quite bourgeois.