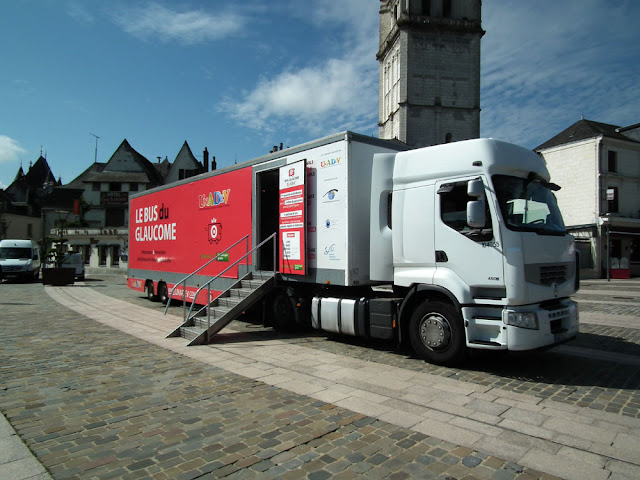 The other day when we were in Loches for the market Simon came across the Glaucoma Bus, parked at the end of the market. I didn't see it because I was too busy chatting with Sylvain, a stallholder I know who has just started up selling local artisanal delicacies (beer, wine, patés, nut butters, pasta, lentils and such like).

Anyway, it turns out that every year, from October to June, the National Union of the Blind and Visually Impaired (UNADEV) sends a semi-trailer to tour the country and raise the profile of glaucoma. They offer information about the disease and a free test and consultation. The 'bus' is staffed by local ophthalmologists who volunteer for duty when it is in town, assisted by a UNADEV optometrist.

The 'bus' visits 15 regional centres, and this year it was Chinon, Loches and Tours' turn at the end of May, before the bus finishes its season in Bordeaux in early June.

The sides of the 'bus' have slogans such as 'Say Stop to Glaucoma', 'Information and Prevention of the risk factors for glaucoma', 'the number one cause of total blindness in France, glaucoma affects more than a million people, half of whom don't know they have it', and 'from the age of 40 the Glaucoma Bus offers you the possibility of three free, quick and painless tests'.

What a good idea. It should be adopted by the NHS...

Yes, it seems like a good initiative. It's not run by the state system though, but by the equivalent of the RNIB.

Yes the world now runs on charities!!! WHY?

Because politicians have been seduced by the neoliberals and because they know that when government money fails to flow, private money steps in.