Arguably the most famous grave in Montparnasse cemetery is just inside the main entrance and contains the remains of Jean-Paul Sartre and Simone de Beauvoir. 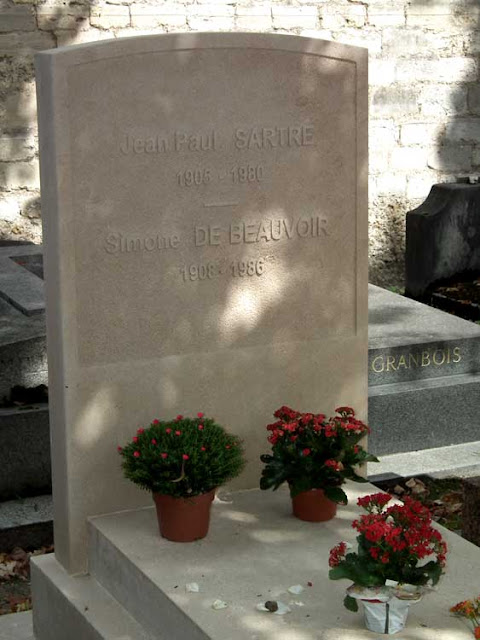 These two form one of the most famous literary couples of all time. They met in 1929 as students, and their lives remained entwined although they never lived together. Intellectually they were equals, famously coming joint first in their exam to qualify as a high school teacher (de Beauvoir was the youngest person ever to pass).

He wrote Les Mains Sales ('Dirty Hands'), about being a politically engaged intellectual. I had to study it in high school, in French, but needless to say I remember absolutely nothing about it. His work might not have engaged a 15 year old Australian, but an indication of how highly regarded and well known he was in his own lifetime is demonstrated by the fact that fifty thousand people joined his funeral procession.

Thanks to our friend Huub we own copies of de Beauvoir's novel Tous les hommes sont mortels ('All Men are Mortal') in both French and English, about a man who is immortal. I have read them both, and I swear she's invented complicated grammatical tenses in the original French. Some of her verb conjugations can't possibly be real, and certainly don't seem necessary.

Her book The Second Sex catapulted her into the world spotlight in 1949. The book remains a much admired feminist text. I would argue that ultimately Beauvoir has been more influential and achieved longer lasting aclaim than Satre. I wonder what she would have to say to Catherine Deneuve today and what her take on the whole #MeToo or #BalanceTonPorc campaign would be?* Not to mention the current and depressingly ongoing battle for equal pay.

*My take, for what it's worth, on Deneuve's letter is that it was unfortunately very badly written, in imprecise and ambiguous language, that has allowed it to be willfully misinterpreted. Also, some of the co-signatories haven't been very helpful, by themselves twisting the intentions of the letter into something quite unsavoury.

It is troubling how polarising the issue has become, with no nuance possible, no discussion of the difference between 'being assaulted' and 'being discomfitted' (I am not advocating that men should be allowed to freely do either to women, by the way, but would advocate that there must be some recognition of degree and a discussion around how it is judged.) The aim should be about preventing people being humiliated and about establishing nuturing support networks. It should be about recognising individuals, good or bad, not creating blind tribal loyalties. Men should be positively encouraged to control their impulses to dictate and predate. Television programmes should stop presenting sexual encounters between men and women as acts of violence and instead show us loving mutually respectful relationships. Images of women infantalised or victimised should neither be normalised nor fetishised.

There is no doubt that sex pests are a problem, especially for young women who lack self-confidence and life experience. What Deneuve was protesting was the way the #MeToo is going about highlighting the issue, essentially a wave of social media outrage. She clearly has no problem with the aim of the movement, which is to protect women from sexual harrassment. But hey, Deneuve, like me, is a white, middle class woman over fifty years of age. Our opinion isn't fashionable and our priveleges show. We are the standard bearers for Beauvoir and the war against machismo, gender inequality and religious misogyny but we distrust extremes. Many of us quite like our fathers, husbands and brothers.
Posted by Susan at 09:00

I'm all the way behind you, Susan!

I commented earlier, but it's a no show. What I said was that I agreed with all you had to say. Somewhat on the subject is today's blog from John Gray (disasterfilm.blogspot.com). He's always a good read.

I agree Susan. It would be hard to find any woman born in the 50's or 60's who hadn't been on the receiving end of groping, bottom slapping or unpleasant teasing, or worse, from the men they encountered at school, at work or at home. It's almost as if it was expected of a man to do it, as much as we were expected to put up with it, it was then normal behaviour from the average bloke. I hated it but can't say it did me any lasting harm, unless you count being cautious in new company and avoiding situations where I might be at risk. It's just sad that it still goes on.
What makes it tricky is how you differentiate by degree, what's acceptable and what isn't, apart from the obvious extremes. When does a cheeky remark or a friendly pat on the shoulder become abuse? Presumably when the recipient doesn't like it.
It also happens the other way around. A male fellow student landed a plum job only to find that his female boss was very predatory and not happy to take no for an answer. She made his working life very difficult when he declined her advances and eventually resigned. He told very few people about it in case they thought he was making it up or had brought it on himself somehow. Where have I heard that before?!