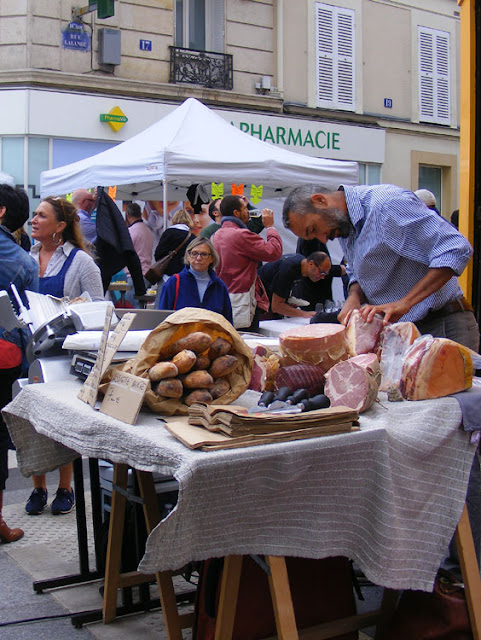 Ever since the WHO officially declared that cured meats increased the risk of colon cancer, the French charcuterie industry has been in turmoil. Colon cancer is the most frequent cancer amongst non-smokers in France and the second biggest killer overall. Just 50g of cured meat consumed daily increases your chance of colon cancer by 18%, and French people really like charcuterie. There is a massive public health programme dedicated to early detection of the cancer, with free annual tests offered to anyone over 50. The problem is meats treated with potassium nitrate (saltpetre or E252) or sodium nitrite (E250). For decades the meat industry has been saying that these chemicals are necessary additions to protect the public from botulism. 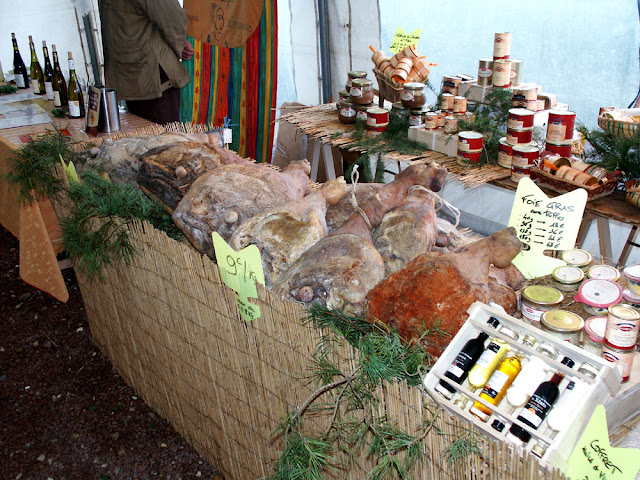 This turns out to be a lie, and now everyone knows it's a lie. What they really do is speed up the curing process, ensure the meat retains an appetising pink colour, allow sloppy hygiene practice and cut production costs to increase profits. Modern French charcuterie is secretly optimised by chemicals, and an investigative journalist has spent the past five years working on blowing the whole story wide open. 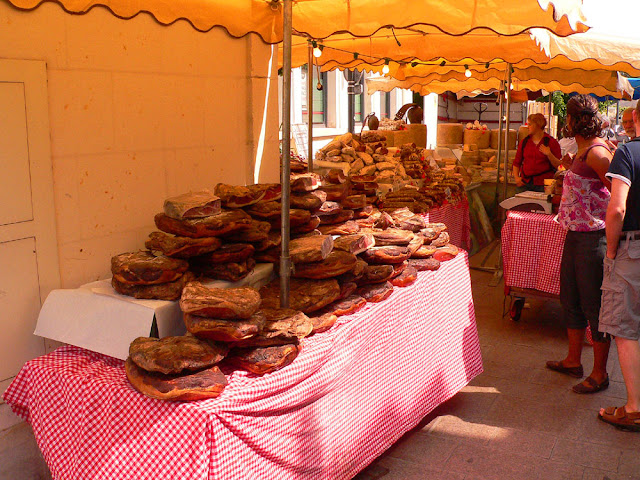 Saltpetre made from wood ash was used on certain meats in medieval times. But the current problem started in Chicago in the early 20th century, where several entrepreneurs treated knackwursts and hams with modern refined nitrates which replaced the salt as a curing medium. Salt was relegated to the role of flavour. Their methods became globally ubiquitous because traditional charcuterie took longer to make. Nowadays, it's no good thinking that buying expensive charcuterie will save you -- nitrates and nitrites are everywhere. Not even organic or products with AOP certification are necessarily free from them.


Home cured bacon. You can see the brownish surface discolouration which is the telltale sign of a nitrate/nitrite free product.

There are two basic types of ham, dry cured and cooked. If you want to avoid nitrates and nitrites then dry cured ham is a good choice. Since 1993, the Parma ham producers have banned these chemicals, and their ham is widely available, often at an affordable price. A few other dry cured ham producers in Europe have followed suit. There has not been a single case of botulism in Parma ham since they went nitrate/nitrite free. On the other hand, if you want nitrate/nitrite free cooked ham, it is still difficult to find. A few artisanal producers make nitrate/nitrite free white ham, and the two biggest industrial producers, Herta and Fleury Michon, have recently introduced a nitrate free product.


Home curing bacon --  one way of ensuring it is nitrate/nitrite free. 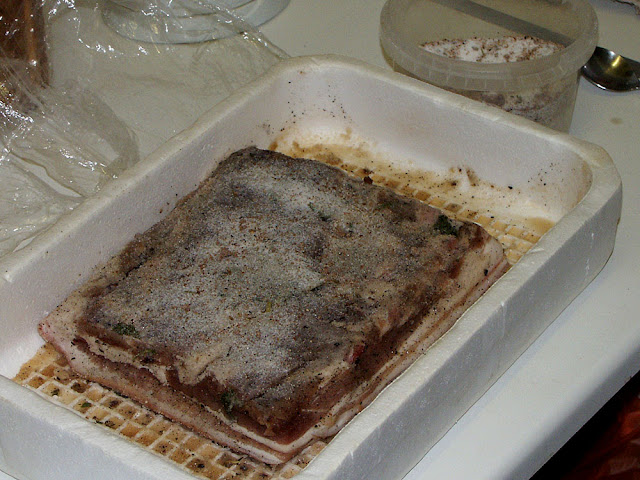 With rillettes, if you buy artisanal products they will be nitrate/nitrite free, but the discount supermarket lines will contain them. 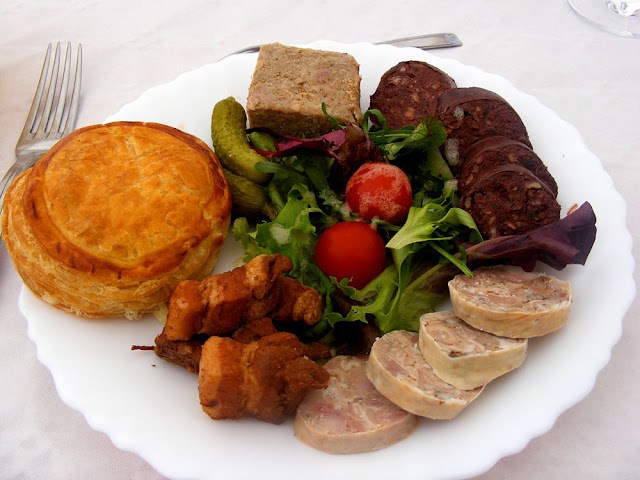 Nitrates/nitrites are not permitted in other types of food, eg smoked salmon is nitrate/nitrite free in Europe.


A saucisson stand at Loches market. 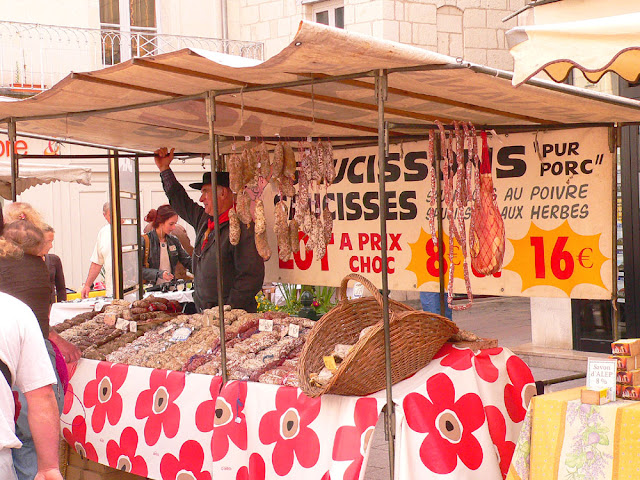 Today there is no need to use nitrates/nitrites, and no possible justification given how carcinogenic they are known to be. Cochonneries or what?!


Saucisson at a winter market. 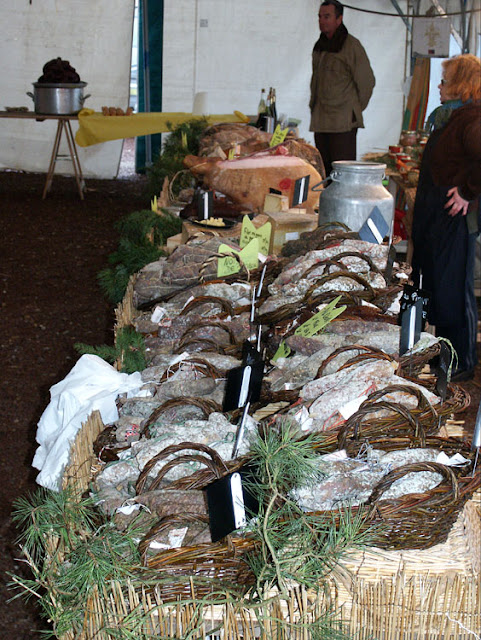 French manufacturers now face a real challenge, given that they've been caught out not upholding their gastronomic heritage. Do they have the will and the means to change their production so that their charcuterie is the real thing and their consumers not at risk from cancer? It's a case of the French agrifood business, with its 170 billion euro annual turnover, against the health of the population. The use of nitrates/nitrites is also pushing down the price the pig farmer gets. Many of the industrial manufacturers transforming the pork meat don't care about the quality of the raw meat, only the quantity and their margin. 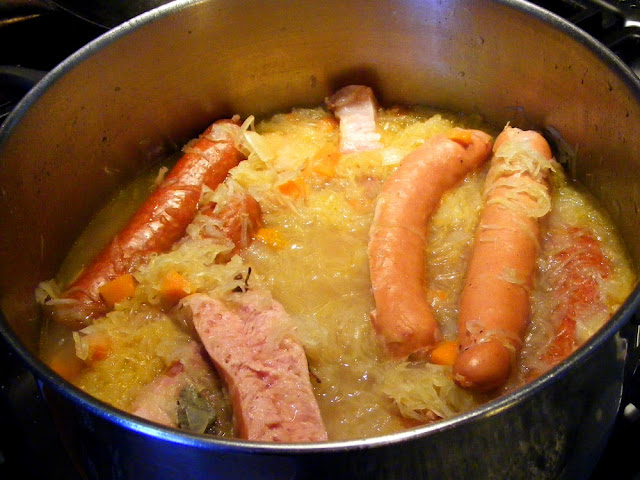 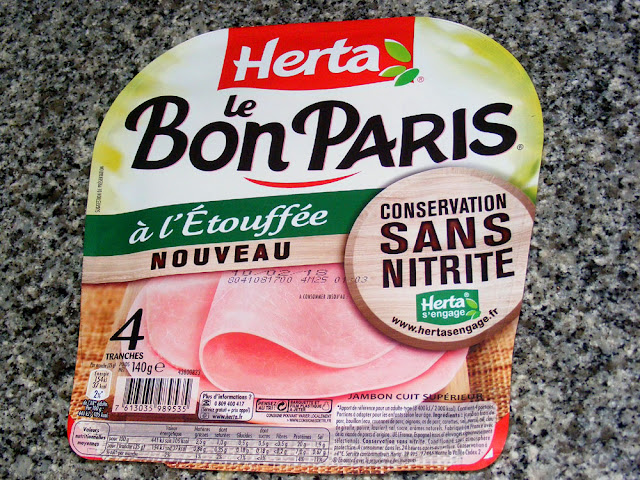 In the course of writing this post I went to my local Maison des Producteurs in Loches and bought various transformed meats (garlic sausage, boudin blanc, rillettes) and none listed nitrates/nitrites in their ingredients. Maison des Producteurs boutiques are co-operatives of local farmers and artisanal producers, selling locally produced fruit, vegetables, meat, quiches and pies, cheese and other dairy products (including icecream), flour, pasta, wine, beer, jam and other stuff I've no doubt forgotten. On the other hand, at the supermarket, the one packet of ham (white or dry cured) that I was able to buy without nitrates/nitrites came from the biggest of the French industrial charcuterie brands and trumpeted its nitrite free status in big letters on the front of packet. I was also able to buy lardons (bacon bits) that were nitrate/nitrite free, made by Madrange. They had used beetroot juice to ensure the desirable pink colour in the meat.

Very Interesting post. I suppose the same applies in the UK. Will be looking into it!

The situation is the same globally as far as I know. I think the US might have toughened up their legislation to reduce nitrate/nitrite usage, but I don't know of anywhere else that has taken steps against it.

Very informative post, Susan. It shows that in almost everything human, money is paramount.

When I was a boy, in the late '20s and '30s, the so called jambon de Paris or jambon blanc was in fact grayish, no hint of pink whatsoever, and delicious; probably no nitrates or nitrites there. If only reluctant customers could be trained to understand that meat doesn't necessarily need to be pinkish or reddish to be edible, the nitrates, nitrites or other chemicals will go out of fashion, and healthy curing back on!

As a side note, I just cooked a small choucroute yesterday, garnie with only half a Polish sausage, Kielbasa, not too heavy on nitrites or nitrates I hope!

We used to get the best country ham at a butcher shop. Even my uncle the meat salesman thought it was the top. One time I asked to use their restroom. The woman said, Sure, through here, back through the curing room, next room on your right. Walking through the curing room I nearly gagged. I inhaled such a dose of heavy chemicals that I could taste them for hours, and that's the day we gave up country ham.

Very interesting, Susan. Thanks for the research. We often have cooked ham, and I usually look for something good, but will now be on the look out for the hidden chemicals!

I haven't noticed any packs labelled 'without nitrite' in the UK but will look and report back...

They might say 'without added preservative' (sans conservateur ajouté). I noticed that Fleury Michon uses this expression (which isn't strictly accurate, as the salt is also a preservative). What they mean is that the ham does contain nitrites, but it is a natural ingredient from the vegetable stock in which the ham is cooked, not added as a pure chemical. The levels are half that of a ham that has had nitrites added.

Very interesting and useful, thanks. Better informed is better armed at making the right choices when it comes to choosing food that will not poison us. When reading your post I was reminded of a TV series last year about Victorian bakers and the revolting things they did to their bread to make it cheap enough for the poor to buy and poison themselves. How far we haven't come in the food industry!

Yes you are quite right. It is very like the practices in the bread industry (which even today isn't ideal).