An Afternoon in a Forbidden Place

It seems like ages, but in fact it was only 10 weeks ago that Susan and I left cold Preuilly sur Claise for summer in Australia. Before we got there, we had one more wintery obstacle to navigate.


Based on our previous experience with them I had booked tickets on Air China, leaving Paris at 19:30 on Friday and arriving in Sydney at 15:30 on Sunday. This gave us a full 14 or so hours for us to amuse ourselves in the Beijing area, so I emailed a couple of tour agencies. The most realistic response we received (and the only one that made it look like our email had been read) was from Catherine Lu Tours, so we decided to book the Beijing evening tour with an alteration or two. 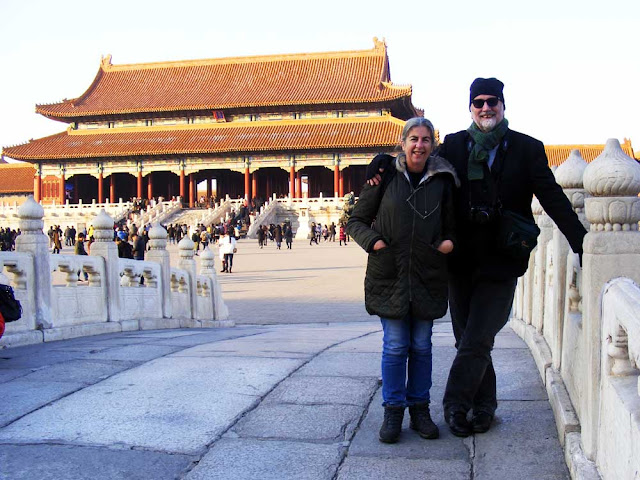 We were met at the airport by Peter, a newly married Chinese guy with good English, and taken to our car and driver, waiting in the huge multistorey car park. From there we drove to the Forbidden City, which is enormous (it's OK, it won't be described in detail, you will soon see why). Peter was really patient at explaining what we were looking at and orientating us (as it were). It was cold, but quite sunny and the sky was clear, a real piece of luck.


The entry to the Forbidden City 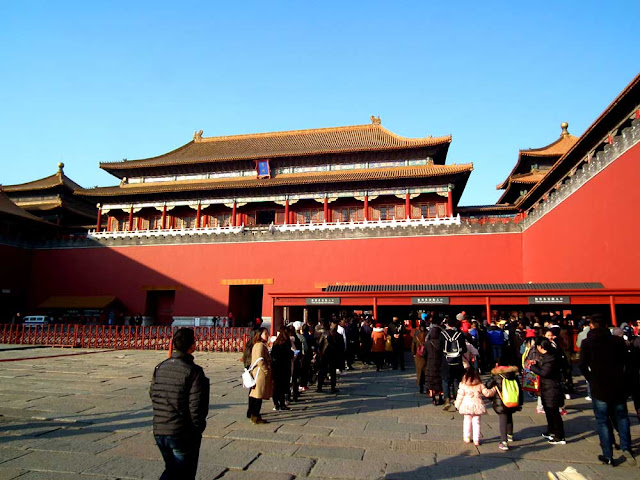 
While Susan was taking this photo, I evaporated (apparently) 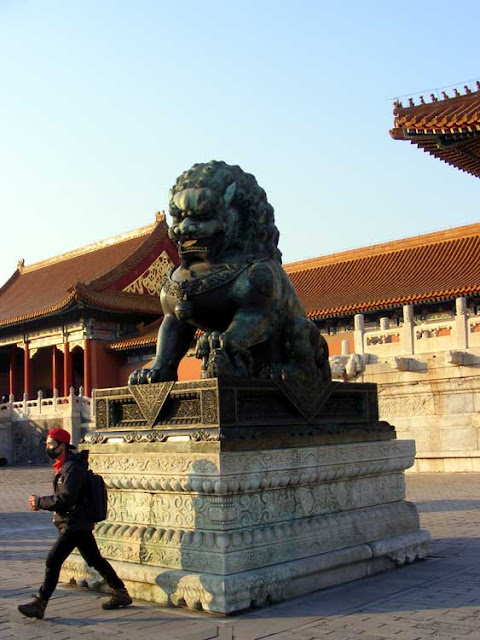 Meanwhile, Susan was looking for us, but we assume she had moved ahead three courtyards and come back two to look for us. We couldn't use our phones (Susan's phone wasn't working, I could only do emergency calls) and closing time was drawing in. By this time I was very tense (as was Susan, she tells me!) as it was over an hour since we had last seen each other.

Once the announcement about the site closing was made, Peter and I decided on a strategy. As there are only two exits from the Forbidden Palace, I went back to where we had entered, while Peter ran off to the other. In between the two he met Susan, and we were united!


I never got to see this part of the Forbidden City 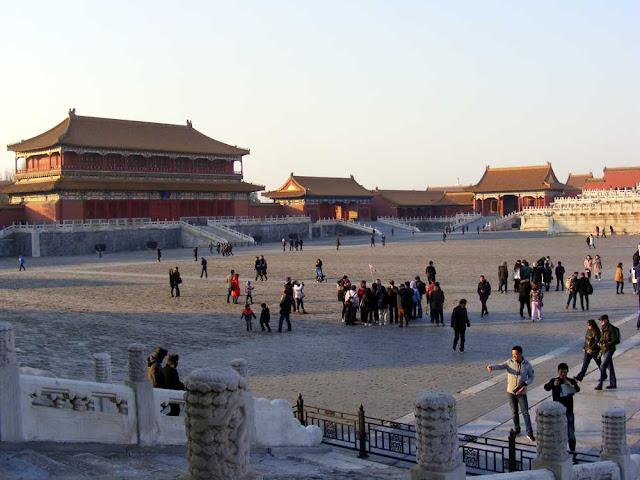 As a place to get lost, Beijing can't be recommended, because of language and technology problems, and the sheer number of people. Quite how it happened we still can't work out, and I am peeved that we only got to see very little of an enormous site (and I saw considerably less than Susan, having not got much past the front door, while she made it all the way to the back door). Peter was really very helpful and worked really hard to get us back together. He covered an amazing amount of ground in looking for Susan, later claiming his smart watch had recorded 11,000 steps.

This event had lasting effects - I was so tense and had clenched my jaw so hard that it took almost a week before I could eat properly.

There are more photos of the Forbidden City here, and we will be writing more about our evening in China in the next couple of weeks.
Posted by Simon at 09:00

It happens to us all the time when Elizabeth stops to take photos and I don't. Not that bad though.

Well - it was a great idea! That happens to us often - I try to pay attention while mon mari wanders off assuming all will be well. Fine in France - not China!