The daughter of Gaston, Duke of Orléans, who was brother of (and conspirator against) King Louis XIII of France,  Anne Marie Louise d'Orléans was always going to be trouble. This was amplified by the fact that her immensely wealthy mother died 5 days after giving birth, leaving Anne Marie the richest heiress in France.

She never married, although she received proposals (or plans for hitching her up were received) from various quarters including Charles II of England, Alfonso VI of Portugal, Cardinal Ferdinand of Austria (presumably before he entered the church), and Charles Emmanuel II of Savoy. She was also close (some say too close) to her cousins Louis XIV and Philippe, Duke of Anjou (who was openly gay). 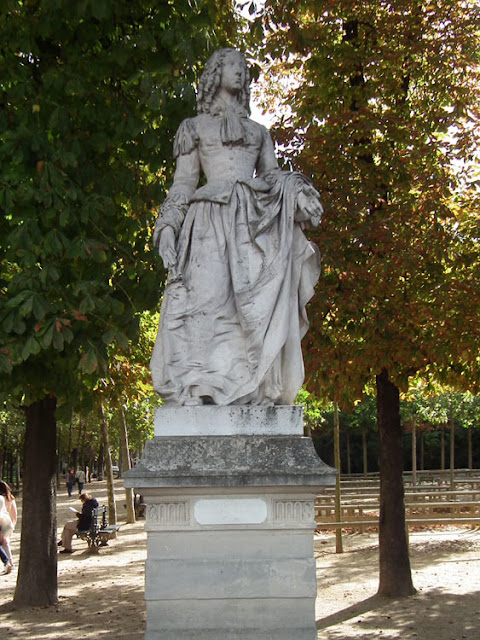 She was very close to her father, and supported him in his plots against Louis XIII and Cardinal Richelieu (and his sucessor Cardinal Mazarin), and it was this that queered her pitch to marry Louis XIV. She was exiled a number of times due to her intriguing (and always choosing the wrong side), but her wealth ensured that she was eventually always forgiven. This wealth was increased even further when her father died and she inherited the bulk of his estate.

It was at this point it appears she went from being a danger to the crown to just being a nuisance whose foibles and excesses had to be tolerated. She was prone to dressing inappropriately, and once said "people of my rank are always young". In 1666 she met the Duc de Lauzun, an impoverished minor nobleman and distinguished soldier who was part of the marriage negotiations between Louis XIV and Queen Marie Thérèse. She asked Louis XIV's permission to marry Lauzun, which was given, and then retracted because he was seen as well below her status. Lauzun was then imprisoned in the Bastille (for no stated reason), which gave Anne Marie another chance to make herself unpopular with the ruling parties.

She died in 1693, the "the wealthiest single princess of Europe", and was buried in St Denis.

The Jardin du Luxembourg has statues of 20 French Queens and Illustrious women. The subjects were chosen by Louis-Philippe I in 1843. This statue was created by Camille Demesmay in 1848. To see Anne Marie Louise looking (it has to said) a bit frou-frou you have to go here.

She was better known in France as la Grande Mademoiselle.