First of all, an explanation. The term Idiot Wagon isn't pejorative, but a term of affection, rather like you would use when your dog does something silly...


The AMG A45 is a bit of a beast. Mercedes send their smallest 4 door hatchback (the A series) to the AMG factory, where the car is un-manufactured, the engine and gearbox rebuilt (each item done by one individual who signs his work), fitted with a mahoosive twin turbo, and just about everything else upgraded - suspension, interior, steering, wheels, brakes. Then, according to the options you choose, an aerodynamic pack is added, and all of a sudden you have a 4 door shopping trolley that will outrun most supercars.


The car my brother very generously lent us when we were in Australia:
A fully optioned AMG A45 4matic 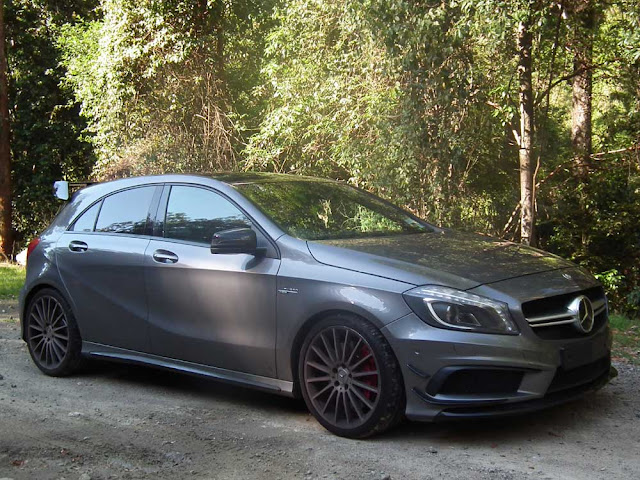 This makes overtaking a real blast - literally. Injudicious application of the loud pedal, even in "ECO" mode, will take you past most trucks before you realise it, and even the shortest of overtaking lanes become practical. In sports mode it's even faster...

Apparently all those plastic aerodynamic bits aren't just for looks.
I never really drove fast enough to find out. 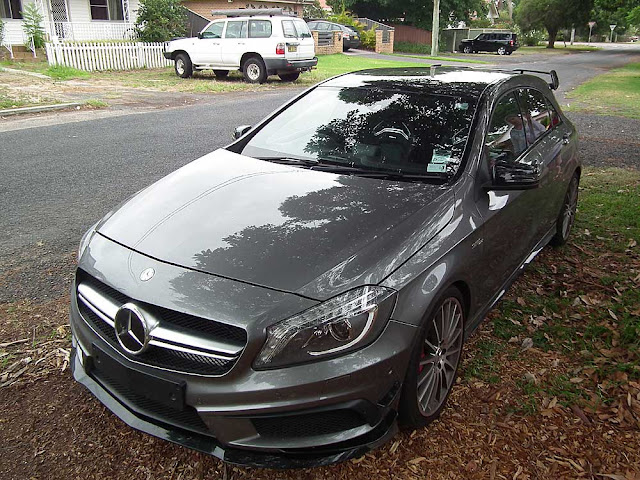 It climbs hills and goes around corners like a lunatic, meaning you have very little use for the super huge (and super efficient) brakes. In sports mode it cackles like a demented witch everytime you take your foot off the accelerator, and the seatbelts give you a hug when you put them on. The load space will take two large suitcases, and there is room for 3 in the back seat although anyone behind me would benefit from being either 1 metre tall or a dual amputee. The GPS more or less works, although it does sometimes take serious convincing about describing the route YOU want to take, and the sound system seems to be ok (not that I ever used it). Likewise the sunroof, which I opened once just so I could say I'd done it.

The headlights are amazing, although the auto-low beam function gets confused when confronted by reflective road signs, and the windscreen wipers just don't cope with the way it can rain in Australia. On the other hand, the climate control really did cope with Australian weather  - even when the outside temperatures were in the 40's (well over 100F) we were looking (and feeling) cool.

I particularly enjoyed the adaptive cruise control, which you can set just above the speed limit and forget, allowing the car to slow as the traffic in front of it slows, before automatically accelerating (usually like a maniac) when you pull out to overtake. There were stretches of over 100km where I didn't touch either pedal at all. I never tried the automatic reverse parallel parking (press the button and it reverses into the parking place with no driver input) because although it sounds like a good idea, I never needed it.


Yup - flappy paddle gearbox, and the bit of the speedo you use is all in the bottom left corner. 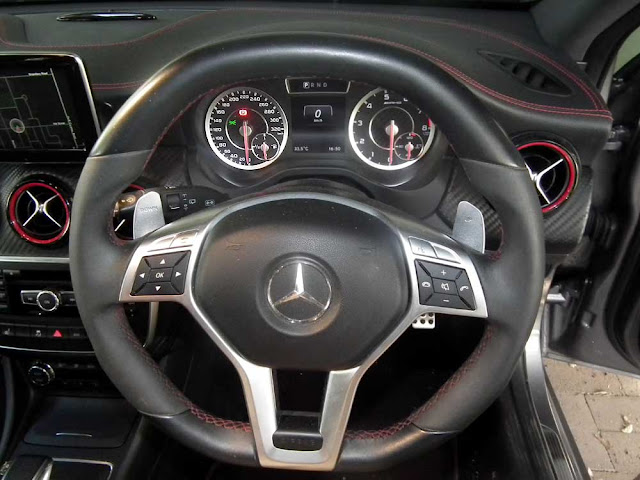 It does have issues. The suspension has virtually no travel (and with 19 inch rims the very wide but not very thick tyres aren't much use for absorbing bumps), and the racing Recarro seats aren't made for man sized people. It's also very low, which meant the proximity "watch out, we're going to crash" alarm went all hysterical when encountering speed bumps in station car parks. The lack of suspension travel might not be so much of an issue on the good roads around here, but on some of the windey roads I chose to take in Australia, road surface isn't really a thing.

Not a car for mature people, or those with dodgy hips or knees.. 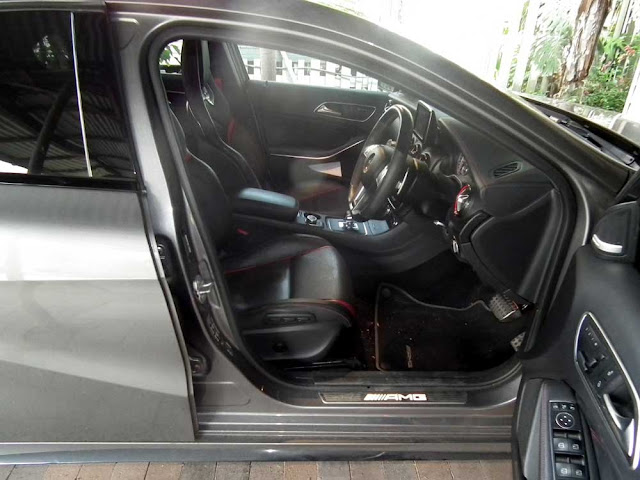 Would I want one to live with? Honestly, I don't know, although the fuel consumption was ok (we used 545litres of fuel for 6893km at 7.9l/100k ) I imagine the insurance would be more than two Traction Avants (insured as Taxis) and a 1.5l Ford hatchback all added together. I also thought it a bit loud even in ECO mode, although the soundtrack in sports mode - where you want it - was really antisocial and therefore a good thing. I love the reassuring squeeze the seatbelts give you when you do them up, the way it goes around corners, and the way it overtakes. But then there is the issue of cost - a Porsche would be cheaper.


The risk? The risk is that I might want one.. 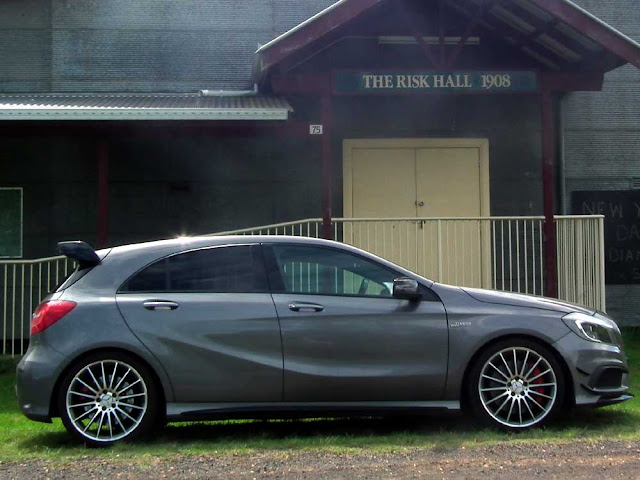 Just substitute the seats with a nice comfy sofa, and give the suspension some travel and I might consider it. Especially if every time I got out the car I had an idiot grin on my face...

Ooooo.... nice Merc!!
I presume, given the acceleration, that the AMG part of the name stands for....
"Arrrrg!! Me Guts!"

Nice wheels but I would have one as a prize but wouldn't spend good money on one... What is the risk hall!! sounds interesting... another blog perhasps... Hope the flu is getting better.

AWG = surely it stands for AH MA GAWD as one's driver accelerates past a Leroy Merlin truck 100' before a rond-point?

You could have a point there......... first time I stepped on the accelerator in overtaking mode I was so amazed I momentarily forgot to drive - I was just hanging on

100metres? pish!! No-one has to decide that early in the idiot mobile

Illness is lessening. As for The Risk.. hopefully in the not too distant future