Jeanne d'Albret was the niece of François I, the daughter of his sister Marguerite. She was raised in the austere chateau of Plessis-lèz-Tours and as a young woman spent much of her time at the heart of the French court with her uncle, as well as being Queen of the tiny Protestant stronghold of Navarre in her own right. Declaring definitively for the religious reformers in 1560, ultimately she led the Protestant cause in France, along with her son Henri (later to become King Henri IV of France). 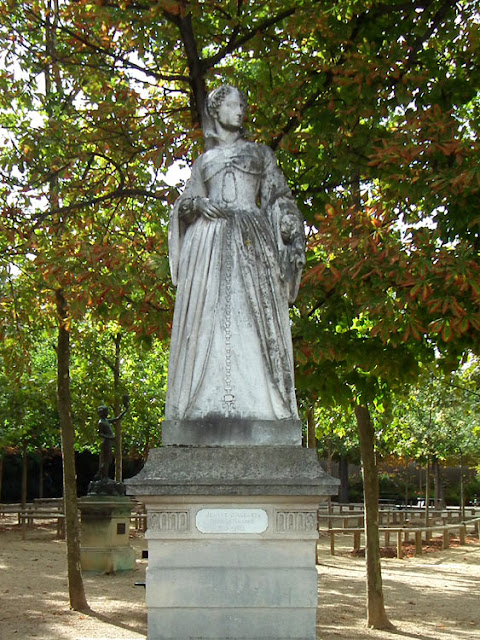 Despite her loud and very public protests, at the age of 12 she was married to the Duke of Cleves (brother of Henry VIII's unloved bride Ann). Continuing to reject her husband she finally got an annullment based on the fact that the marriage had been forced. Technically, the church allowed girls to reject potential husbands, and in this case she had been physically carried, kicking and screaming, to the altar. Still, it indicates real force of character even at a young age that she continued to hold out against family pressure.

Later she fell for the womanising Antoine de Bourbon and married him once her manipulating uncle François had died. However, the marriage, which lasted 14 years and produced five children, was rocky. They rarely saw eye to eye, partly because Antoine's was continually roving. She seems not to have got on with many of the women at court. She and Catherine de Medici clearly greatly disliked one another, and even her cousin Renée de France (Louis IX's younger daughter), who was a fellow Protestant, couldn't stand her. Jeanne came to be seen as a dangerous fanatic.

Nevertheless, in 1570 she decided to negotiate with the Catholics in an attempt at reconciliation. Her son Henri was to marry the Catholic Princess Marguerite, daughter of Henri II and Catherine de Medici. Jeanne's sudden death in Paris not long before the wedding was later to contribute to Catherine's reputation as a poisoner.

The Jardin du Luxembourg has statues of 20 French Queens and Illustrious women. The subjects were chosen by Louis-Philippe I in 1843. This statue was created by Jean-Louis Brian 1848. To see Jeanne looking austere you have to go here.