When we were in Paris in September we photographed this impressive Art Nouveau building at 1 rue Danton in the 6th arrondissement. We couldn't work out what the mosaic cartouches said, but the building was looking very creamy and organic, and was presumably showing the benefits of a recent restoration. Once home we did the research and found the interesting history of this place, and better still, a local connection!

This turns out to be the first reinforced concrete building constructed in Paris. It was built by engineer and entrepreneur François Hennebique in 1893 and the architect was Edouard Arnaud. The striking mosaics were created by Alexandre Bigot. The lavish building served as Hennebique's headquarters and offices. The idea was to show that concrete could do everything traditional building materials could do, but cost less. He also promoted concrete as safe -- 'No more disasterous fires' was one of his marketing slogans. 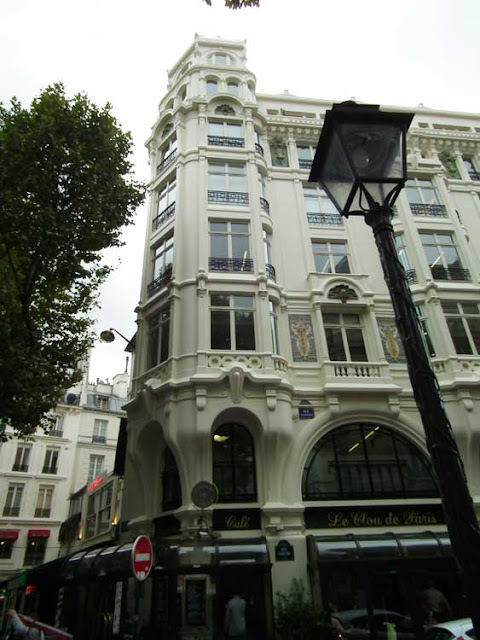 The four floors in the middle were apartments, with shops beneath and the top floor accommodating Hennebique's construction company offices and the 100 engineers that he employed.

The Pont Camille de Hogues in Chatellerault was the first reinforced concrete bridge designed and constructed by Hennebique's company in 1899 and was the precursor to many others. By the early 20th century Hennebique controlled 20% of the global market in reinforced concrete. With the headquarters in Paris, he created a world wide franchise, with agencies in 20 countries. By the outbreak of World War I the company had built 1500 bridges worldwide. After the war the company scaled back and just operated in France. Hennebique died in 1921 and the company ceased trading in 1967. 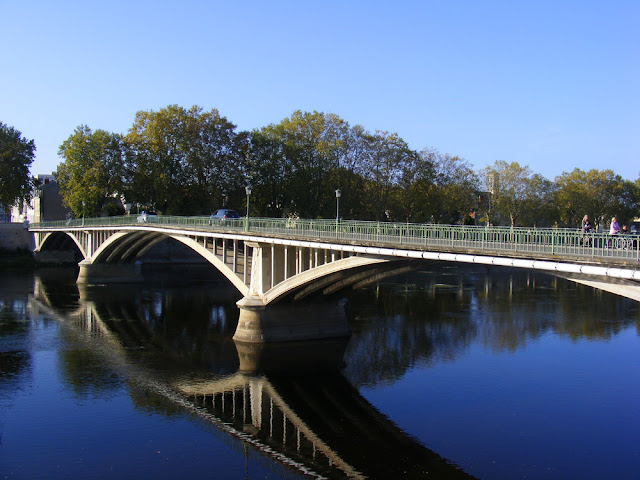 The Pont Camille de Hogues was one of the first big reinforced concrete bridges to be built in France. It crosses the Vienne near its confluence with the Clain in Chatellerault. The inhabitants had been clamouring for a foot bridge for years, so they could get from their homes to the Manu, the humongeous arms factory where they all worked. Eventually the local authority decided to call for tenders for the design and construction of a new bridge.

Hennebique's local agent jumped at the chance to present his company's proposal, and since it came in at 30 000 francs less than the alternative iron bridge, they won the contract. The Ministry of the Interior's engineer responsible for roads and bridges was convinced by the design and so permission was granted.

The design is quite classic and it resembles other bridges of the time made from iron and stone. In fact the reinforced concrete used allowed them to reduce the size of the foundations. The supporting arches are fused with the roadway so that it acts as the key to lock the structure in place. This means that the bridge is not so high, allowing a shallower ramp accessing the bridge at either end whilst still being sufficient should there be a flood.

When the bridge was finished in 1900 they tested it by running a 16 tonne steamroller over it, along with six wagons of 8 tonnes each and a column of 250 soldiers marching in step. In August 1944 it narrowly avoided being destroyed by the retreating Germans and was only saved by the negotiating skills of the Deputy Prefect. It is now listed as a historic monument and underwent extensive repairs to the metal armature between 2006 and 2009.

Email ThisBlogThis!Share to TwitterShare to FacebookShare to Pinterest
Labels: Paris, Towns and Villages near Preuilly

Even tough concrete has been known for thousands of years, it's only in the 19th century, as you said, that reinforced concrete (béton armé) was discovered in France.

I think it is because it has been cleaned by law that this building looks creamy. It wasn't always the case. Here is a photo, allegedly 1954, the legend says 1918, which shows how dirty it looked then. At the beginning of WWII, I remember, it was suggested that strips of paper should be glued to windowpanes to prevent accidents to persons inside rooms in case of bombing. We have an example here.