On our visit to Paris in September we stayed near Montparnasse Cemetery, so naturally we paid it a thorough visit. We will be featuring some of the more interesting graves over the next few weeks. 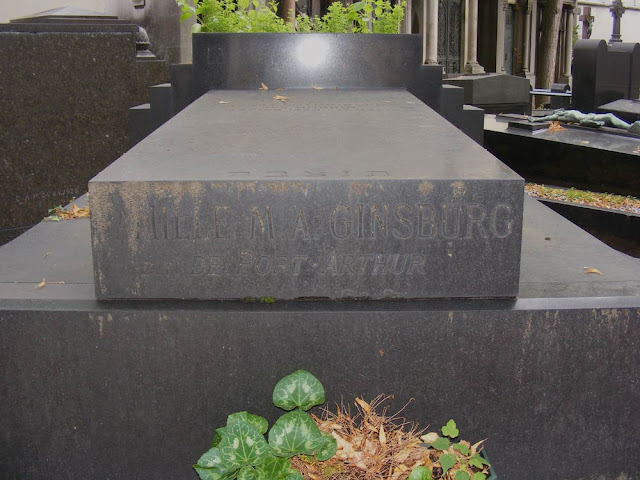 Moïsei Akimovitch Ginsburg was a Jewish Ukranian businessman based in the Russian city of Saint Petersburg and the Manchurian city of Port Arthur. He was widely known as Ginsburg of Port Arthur and was a member of a committee of powerful men in the Russian Empire's Jewish community who organised aid for Jews displaced and starving due to the pogroms at the end of the 19th century and in the early 20th century. He and the aid committee lobbied the deeply anti-semitic Tsars Alexander III and Nicholas II to rescind anti-Jewish laws and prevent attacks on Jews. The Ginsburg family was closely connected to the Rothschilds and used this connection to influence political affairs in Russia, particularly in the matter of the Russo-Japanese war.

Ginsburg had an extensive trading network throughout China and Japan and supplied the Russian army throughout the Russo-Japanese war of 1904-05, both with goods and intelligence. The Rothschilds meanwhile were financing the Russian war effort, at least partly motivated by a desire to win concessions for the Jewish population, whilst simultaneously secretly funding the Japanese. As such, they were all involved in 'The Great Game' and the machinations over the emerging petro-chemical industry in the Caucasus.

Ginsburg and his business partner, the notorious quadruple agent Sidney Reilly, capitalised on the Japanese threat to Port Arthur and made a fortune as profiteers selling food, medicine and coal to the Russians. Moïsei Akimovitch Ginsburg used his great fortune for philanthropic work in Saint Petersburg, building an almshouse and a prayer house at the cemetery for the community. Nowadays he is either forgotten or conflated with various other members of the family or contemporaries with similar names.

I can't find out why he is buried in Paris, but I assume the family came as a result of the Russian Revolution.