Marguerite d'Anjou was born in 1430, probably in Nancy and died in 1482 at the Chateau de Morains, Dampierre sur Loire. Her aunt Marie d'Anjou was Queen of France, married to Charles VII, and her grandmother was the redoubtable sponsor of Joan of Arc, Yolande of Aragon.

Henry Beaufort and William de la Pole convinced the English king Henry VI that the best way to conclude the peace after the 100 Years War with France was to marry the neice of the French king. So the marriage was negotiated as part of the Treaty of Tours in 1444. The deal included the French king paying no dowry and receiving the Duchies of Maine and Anjou, previously under the control of the English. Not really the best start to the arrangement. 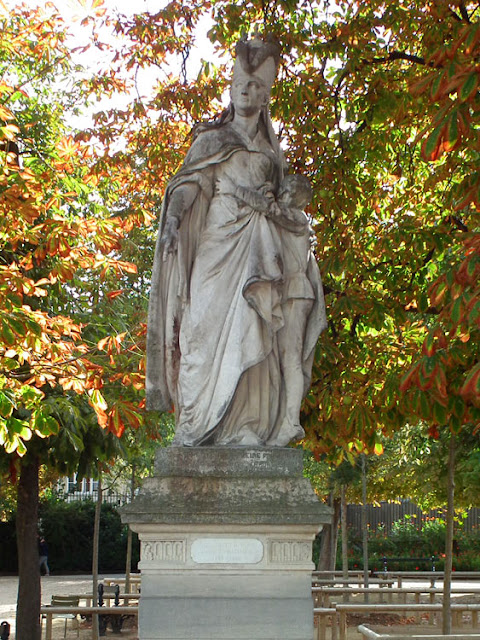 Nevertheless, in 1453 Marguerite produced a son, Edward of Westminster. There were however persistant rumours that he was the son of the Duke of Somerset, and the king was not his father. Marguerite also founded Queens College Cambridge early in their marriage and took an active interest in politics.

When Henry VI developed signs of instability, Somerset and Marguerite found themselves pitted against Richard Duke of York. Their personal rivalry led to the Wars of the Roses. The Yorkists won and Marguerite fled to Scotland. Later she took her son to France, where her cousin Louis XI received them with little familial warmth.

In a last ditch attempt to reclaim the throne for her son Marguerite returned to England with an army, but was defeated at Tewkesbury in 1471. She was captured and imprisoned. Her son Edward was beheaded on the battlefield. Louis XI eventually ransomed her, on condition that her father hand over much of his territory to the crown, and in 1476 she returned to France and lived with her father in Aix en Provence.

After her father died in 1480 she came back to Anjou and lived in several manor houses and chateaux between Angers and Montsoreau. She is buried with her parents in the choir of Angers cathedral.

The Jardin du Luxembourg has statues of 20 French Queens and Illustrious women. The subjects were chosen by Louis-Philippe I in 1843. This statue was created by Ferdinand Taluet in 1877. To see Margeurite looking fiercely protective you have to go here.