The elections for the French National Assembly (Legislatives) is coming up on 11 June, with the second round a weeks later. Our constituency (Fr. circonscription) is called Lochois. The candidates posters have all gone up on the official boards and campaigning is proceeding in earnest. 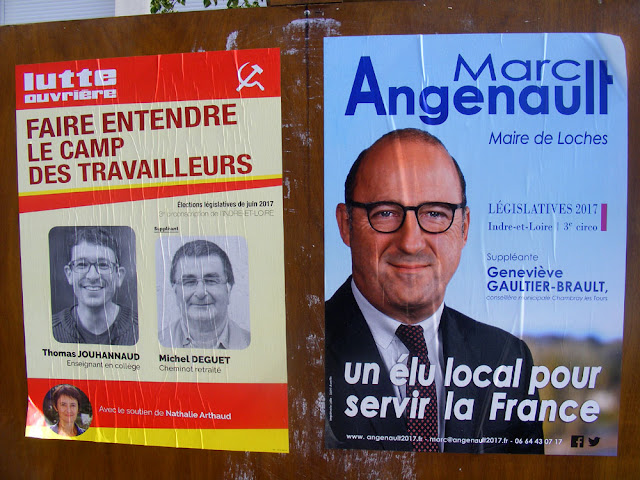 On the left is the poster for the 'Workers' Struggle' party. One of the candidates is a middle school teacher, the other is a retired railway worker. On the right the candidate is the mayor of Loches. I get the impression he is business oriented and not very interested in local heritage. I notice that his running mate doesn't get her photo on the poster. 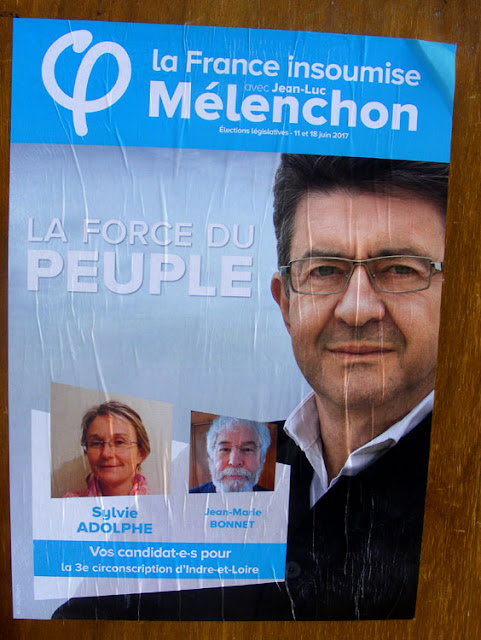 The charismatic leader of the party, Jean-Luc Mélenchon gets to loom large, while the actual candidates are relegated to inset pictures at the bottom. 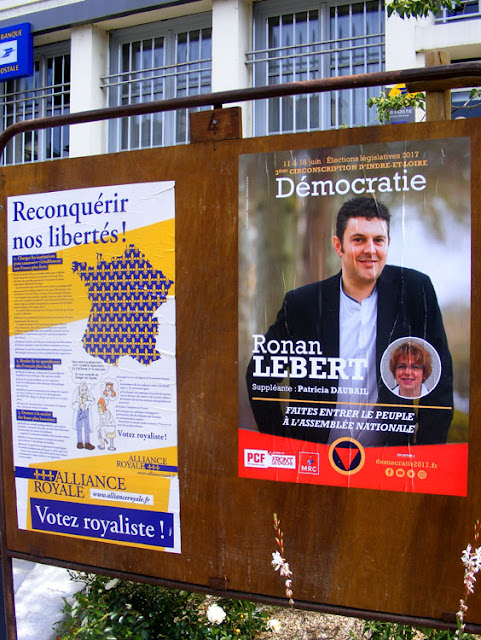 On the left, the 'Royal Alliance', who apparently are serious about wanting a return of the monarchy. On the right the Communists. 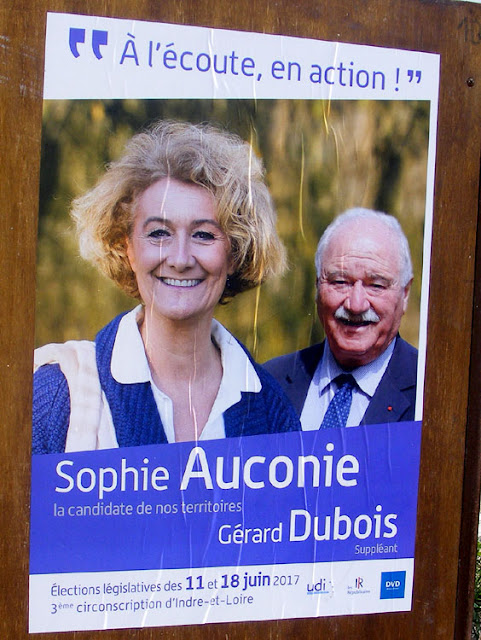 Sophie Auconie is a career politician, currently on the Tours council and a MEP. She was the first to get posters up all over the place and I think is a serious contender for the Legislatives. 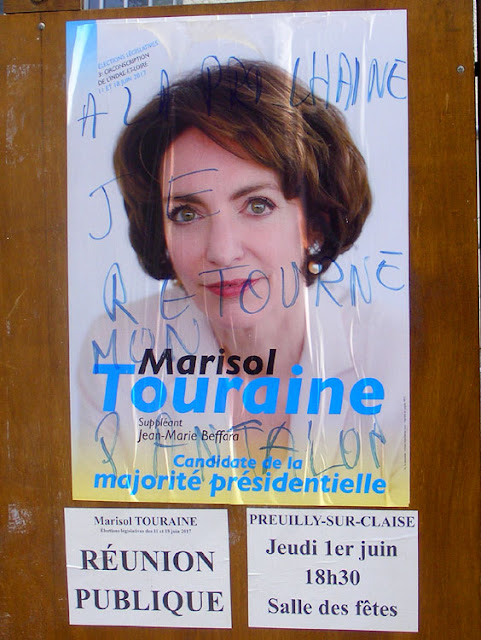 Marisol Touraine is by far the best known of the candidates and the only one I've met in person. Another career politician, until recently the Health Minister, she has had her ups and downs (mostly downs this year, with protests by dentists and radiologists, the downsizing of Tours hospital with the loss of 900 posts, and trouble in the nursing home sector). She offered to defect from the Socialist Party and run for the new President Emmanuel Macron's En Marche movement, but he rejected her. After much disgruntled discussion and negotiation, En Marche has decided not to stand a candidate for our constituency. They have announced they will neither support or oppose her candidature. The expectation is that she will win, and she is perceived as someone they can work with. It has caused a lot of bad feeling in the local constituency office because Marisol is perceived as being an opportunist, and the EM candidate who wanted to stand is bitterly disappointed not to be given the chance.

Unfortunately we will be unable to go to the meeting tonight. It promises to be lively, as the grafitti is a dig at her attempt to run as an EM candidate. It translates as 'next time I'll return my trousers' and the line comes from a song by Jacques Dutronc called L'Opportuniste. Technically it's illegal to deface the posters on the offical boards in every commune, but you can grafitti your heart out on political posters anywhere else.

Everyone is waiting with bated breath to see how many seats the new President's party will win. Will he get a majority and be able to achieve some of his manifesto, or will he be blocked at every turn by a hostile Assembly?

Email ThisBlogThis!Share to TwitterShare to FacebookShare to Pinterest
Labels: Loches and area, Pictures of Preuilly

Do you know more about the "je retourne mon pantalon" expression. In L'Opportuniste Dutronc says "je retourne ma veste" meaning he becomes a turncoat, he has no principles, he's willing to change sides at the drop of a hat. I wonder how "pantalon" fits with that.

I imagine it's the same thing. Retourne as in turn inside out. I wonder if there were actual colours involved - red jackets, blue linings... ??
Jocelyn

I didn't have time to investigate it, but it did occur to me (in the middle of the night when it was too late) that 'return' is often not the translation of 'retourne'.

No idea at this stage Jocelyn, but I think 'turn inside out' is probably the sense of it.

Yes, here it's not give it back but turn inside out. It's not turncoat but turnpants!

There may be an additional subtlety which I don't quite get, around the fact that Marisol famously never wears trousers, only skirts.

Today there are two more candidate posters up, and the one for Marisol has been replaced (I'm not surprised). I ran into our neighbour Edouard, who tells me that in a short space of time Marisol has gone from being very popular to being the 'Devil', especially amongst the young. He says the world has gone mad (he means politics all over is crazy at the moment), not exactly an original observation, but what makes up a lot of conversation these days.

Did you ask him about the "retourner mon pantalon" expression? I still find that mysterious.

I mentioned she'd been grafittied, but we didn't discuss the message. He just made the comment about her now being the Devil.

Here are the lyrics of the song: <a href="http://www.paroles.net/jacques-dutronc/paroles-l-opportuniste>L'Opportuniste</a>. I read the 'je retourne mon pantalon' thing to mean 'I've turned my coat so many times it's splitting at the seams. At the next revolution I'll turn my trousers.' See the final verse.