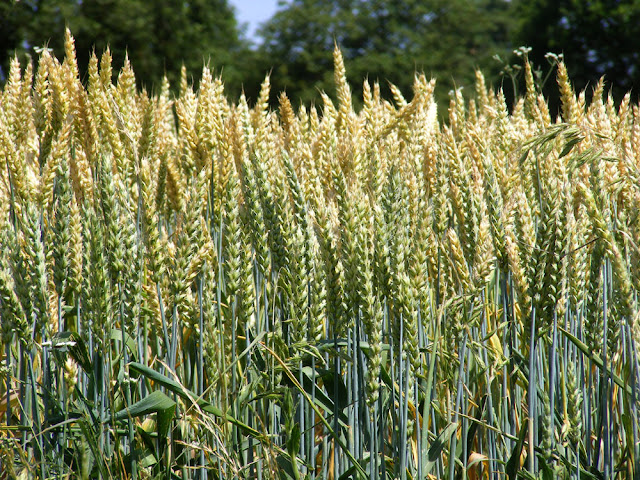 Last year the wheat crop failed due to prolonged and extreme wet weather. This year has been much drier, and so far so good with the wheat. It's looking spectacular.

Rescue Animals:
A friend rang me yesterday to say that a friend of hers who runs an animal shelter is desperate to find a home (or homes) for a cat and a dog, both female, who have been mistreated and are in danger of being euthanased. If you can help, get in touch (details below). The shelter is at Buzancais and the animals can be delivered to their new home in central France. Please forward to anyone you think might be able to help. The shelter does not have a website (!)
My friend's message: Bonjour Susan,

Shock Election Result: Marisol Touraine (Socialist Party), former national Health Minister and longstanding local politician was defeated in yesterday's second round of voting for the National Assembly. Sophie Auconie (New Centre) has won, after Marisol Touraine was widely believed to be playing a double game in the absence of an En Marche candidate. Marisol Touraine won the first round and it is very rare that the underdog wins the second round in this system. However, her own local committee withdrew support, and in fact, En Marche both nationally and locally refused to support her. Sophie Auconie, on the other hand, had the support of the Republicans, and earned brownie points by the way she approached the local En Marche committee. Sophie Auconie is also an experienced politician, but in the European parliament for a different region of France. I could see from the beginning of the campaign that she was going to give Marisol Touraine a run for her money, and I think she played her hand extremely well.
Posted by Susan at 09:00