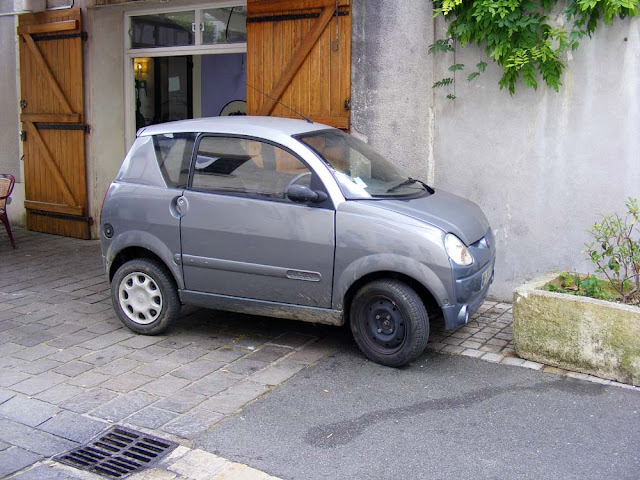 This minute vehicle is not a city car. It is what is generally referred to in France as a sans permis (literal translation: 'without permit') or sometimes a voiturette (little car). This one is made by Aixam, the leading brand. The other main brand is Ligier. The expression sans permis derives from the fact that you do not need a permis de conduire (drivers licence) to drive one of these.

You can drive a vehicle like this on the public roads of France from the age of 14. All you need to do is seven hours of practical training and if your driving instructor thinks you are safe, you will be issued with a permis AM (formerly called a brevet de sécurité routière or 'Road Safety Certificate'). The practical is broken down into two hours on the driver training course, four hours on public roads and one hour of practicing accident avoidance techniques (learning the relationship between speed and time taken to stop, anticipation, how to brake and corner safely...) There is no exam. The theory part is delivered as part of the curriculum at junior high. This permit allows you to drive a quadricycle léger (light quadbike), which is what this vehicle really is. They have two seats and a 50 cc petrol engine. Their speed is limited to 45 kilometres an hour. Drivers are not allowed to take them on autoroutes or divided roads that have more than one lane each way.

The driver education programme is aimed at keeping adolescents safe on the road. The manufacturers of these voiturettes would dearly like to sell them to adolescents or the parents of adolescents, but the truth is they are so deeply uncool and so expensive that I have never seen an adolescent driving one. They all have scooters. The people who actually drive these vehicles are the aged who have never had a full licence, or those who have lost their full licences. Yes, that's right -- you can have your drivers licence removed but you can apply for a permis AM and be sent one automatically by the Prefecture. Mind you, the shame of driving around in a 50 cc vehicle limited to 45 kilometres per hour is probably seen as an added punishment, and you can't do nearly as much damage in a voiturette as you can in a BMW.

AND you didn't say Susan.... They last forever>>>> http://inandaroundbraye.blogspot.fr/2016/07/duct-tape-rules.html

You are quite right -- I should have linked to your post on that dreadful machine!

A sewing machine engine in a tin can. I hate getting stuck behind on of these 45 kph (<30 mph) vehicles on the local roads. The only vehicle worse to have to follow is a tractor.

Fortunately I am rarely in such a hurry that they bother me too much. Agricultural vehicles are inevitable in a rural area, and I grew up with them so accept them as part of the driving experience. With the sans permis I mostly take the view that it's great that there is some practical solution to keeping old people independent in an area where life is difficult without a car.

Of course they will never interest teenagers - they are known as the "drunkards' car"!!!! In fact, I was remarking upon the fact to Jean Michel yesterday that we haven't seen any "sans permis" cars in Germany.

Being deeply uncool, I think they're really cute. But I'd drive something like a Honda scooter if it weren't seriously life-threatening in the land of gigantic SUVs and aggressive drivers.

Certainly if you see someone in a suit and tie driving one you know what they've done :-)

Mostly around Preuilly it is the aged and infirm that drive them though.

As a friend of mine (who rides a scooter) said to me once, it's not a matter of 'if' you have an accident on a scooter, it's a matter of 'when'.

Referring back to Ken's comment about sans permis and tractors annoying him, scooters annoy me. The sort that are ridden at maximum throttle for maximum noise in town and with their riders hunched over the handlebars to gain a bit of aerodynamism on rural roads. I'd much rather be stuck behind a tractor going about its business than a ring-dinging scooter.

Don't get me wrong. I think it's great that they have voitures sans permis for people who are not long-time drivers or have some other reason to need one. It's hard to live in the French countryside without a car of some kind. Around here, it's really is tractors in winter and camping-cars in summer that slow things down. But I do make an effort to be patient.

Living in the inner suburbs of Washington DC I would love to have one for shopping and errands. Easy to park for sure.

I remember seeing them when first in France and wondering why they were inevitably covered in stickers advertising booze and bars...the someone enlightened me...

Size wise they are perfect, but they are a bit noisy. I'd opt for an electric city car if I lived where you do.

LOL. I'll have to look out for that. It's not something I've noticed around Preuilly, but our sans permis drivers are typically elderly or disabled, who have probably never had a full licence.