Botany at the Fishponds of Assay

On Friday 24 June the Association de Botanique et de Mycologie de Sainte Maure de Touraine had an outing to the Complexe Pisicole d'Assay (the Assay Fish Farm). It is 45 hectares of fishponds (Fr. étangs) near the village of Assay on the D26. There is one big pond, originally dug in the 17th century, and nowadays, 31 small ponds primarily used for breeding Pike (Fr. brochet). The complex has been owned by the Féderation de Pêche (a network of organisations that protect aquatic habitats and promote fishing as a leisure activity) since 1962.

The ponds are fed by a tiny stream called the Vivaron, which is directed around the site using a system of sluices and canals. Every autumn the main pond is emptied to harvest the fish. Every ten years the main pond is left dry for twelve months. The Féderation takes between 6 and 12 tonnes of live fish from the big pond every year, and the operation is managed sustainably. The fish are used to stock other freshwater locations around France. The fish are mostly roach, tench, carp, perch, pike and black bass. Whilst waiting to be transported to their new homes these fish are stored in some of the smaller ponds, which are carefully netted against cormorant predation. The other small ponds are designed to reproduce the shallow heavily vegetated waters that pike like to breed in. Three males and a female are introduced in February to each of the 1000 m² ponds and every May between 5000 and 20 000 fingerlings are produced.

The importance of the complex in botanical terms is that it creates what in English is called a fen, and in French is called marais ie a wetland on basic or neutral soil, fed by mineral rich fresh water. 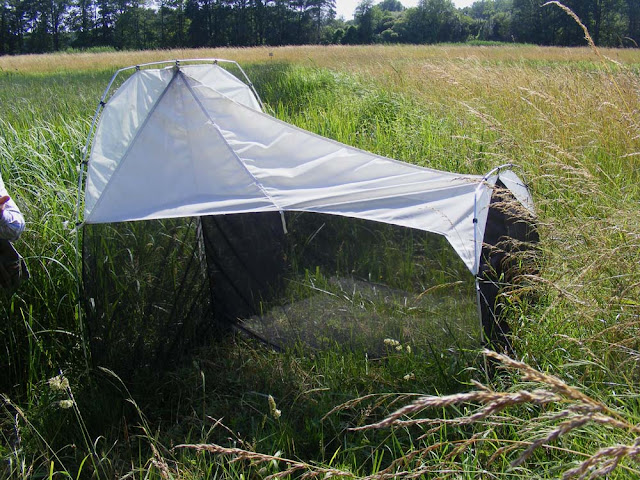 The Département of Indre et Loire currently has a big push on to inventory its biodiversity. The fishponds are an ideal site to set up a malaise trap to catch flying insects, especially those which have an aquatic stage to their lifecycle. I bet they are catching some great flies! There were plenty of lovely deer flies Chrysops spp and clegs Haematopota spp ready to pounce on the bonus warm human bodies that turned up on the day. This tent like structure is designed to be put in the flight path of insects, whereupon they hit the black vertical net. Their instinct is to climb up, which they do, and hit the sloping roof, which directs them to the front top corner of the device, where they fall into a bottle trap. 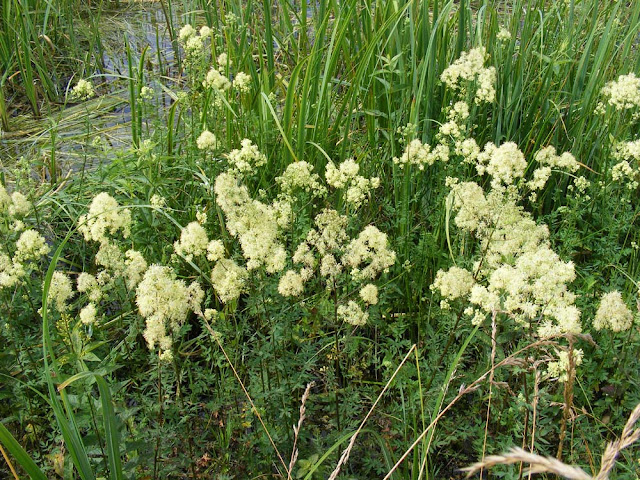 'Common' Meadow-rue, as with so many species which bear the descriptor 'common', isn't common at all, although a century ago it probably was. Personally I think the word 'common' should be banned from the official vernacular name lists. This is a fen and wet meadow specialist plant which is now rare due to the usual suspects -- habitat destruction such as agricultural drainage and modern intensive agricultural practices such as much earlier mowing, for silage rather than hay. It looks quite like the somewhat more abundant but unrelated fenland plant Meadowsweet Filipendula ulmaria from a distance, but up close it is immediately obvious that the leaves are different.


A view over the Pike breeding ponds. 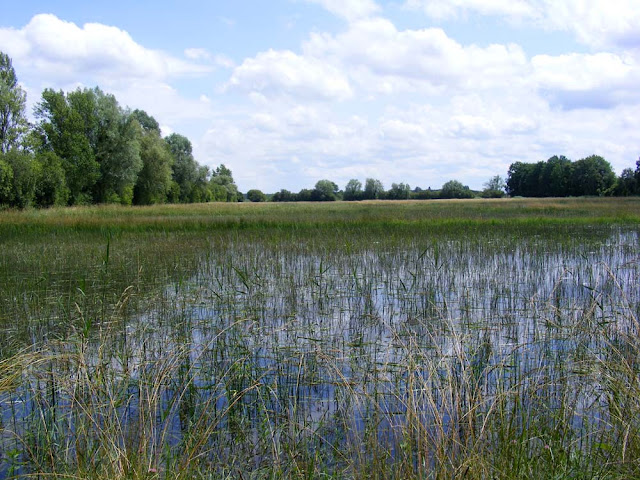 David wading in for specimens. 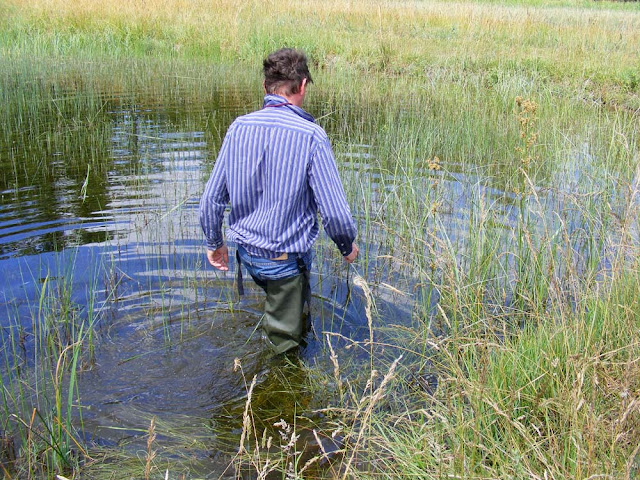 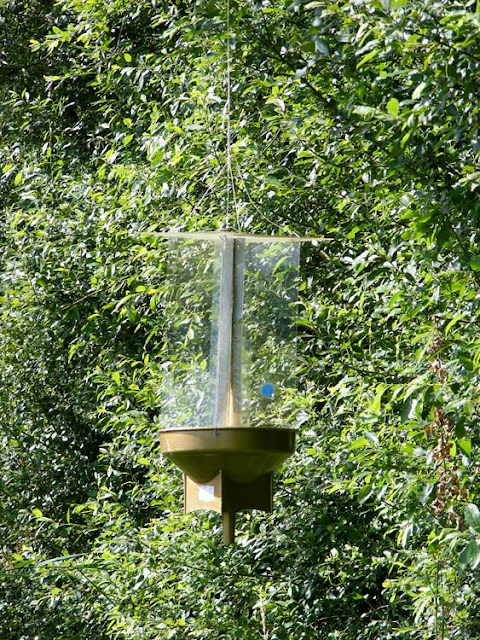 This type of insect trap is used for monitoring beetle diversity on a site. They fly along all unsuspecting, then crash into the perspex panes and fall into the collecting funnel below. Bwah ha ha... 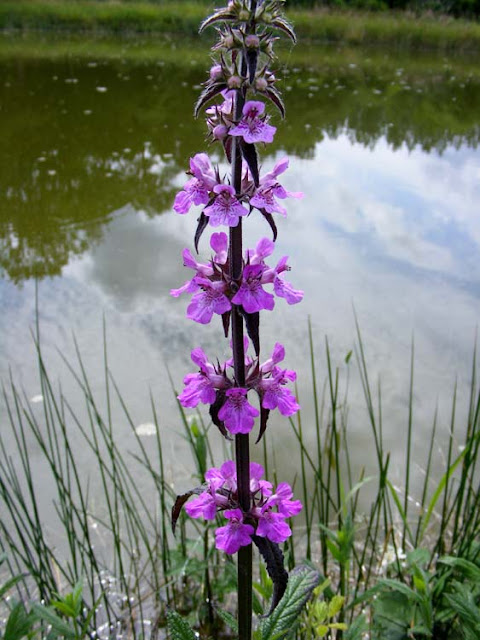 This beautiful and robust wetland plant is also not very common. Don't confuse it with the rather similar looking Purple Loosestrife Lythrum salicaire, which is very widespread. 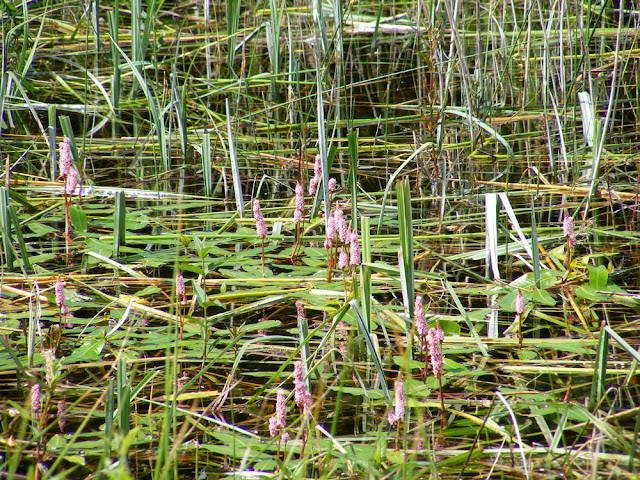 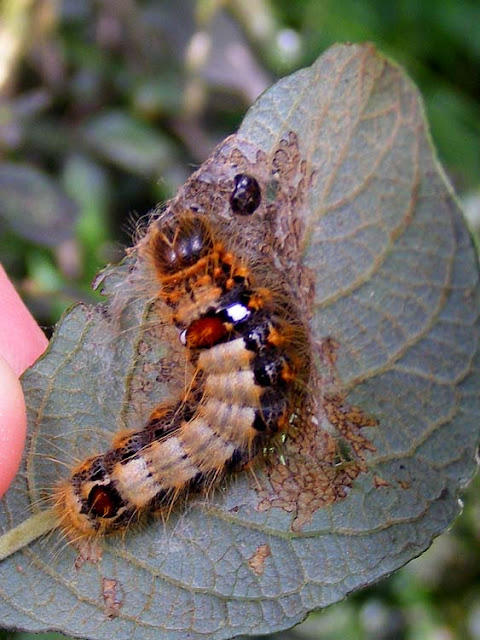 I am deeply frustrated that I can't identify this caterpillar, since it is apparently so distinctive looking. I suspect it is a Noctuidae moth, as there are quite a few species in that family which eat willow and live in wetlands (and there are so many Noctuids that any unidentified caterpillar has a good chance of turning out to be one).


Chantal examining Stonewort Charales which François has fished out
of the pond on the end of his walking stick. 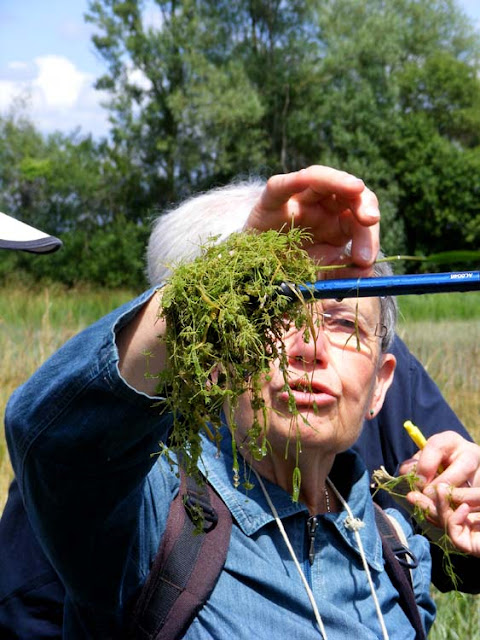 Stoneworts are a type of multicellular algae which photosynthesise and live in fresh water. They can accumulate a calcium carbonate crust which has led to their name. We found two different species.


Cormorant nets over a fishpond. 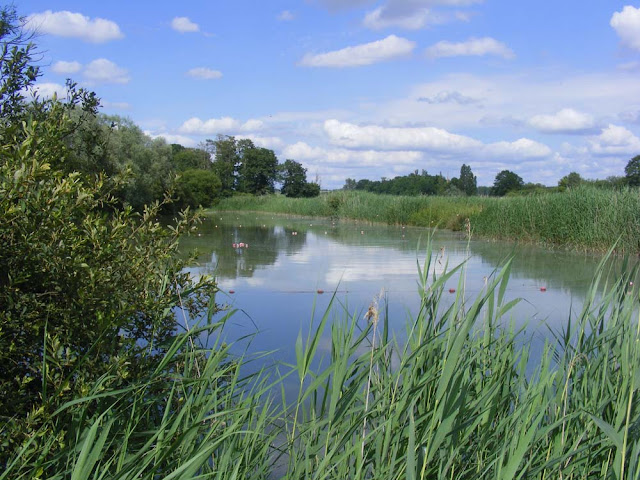 As usual my friends Louisette and André were way quicker getting their photos of the day up online. You can see me (in black, sunglasses) and my sister (pink top, binoculars) and her husband (hat, binoculars) in some of their photos.


Guess what we did yesterday 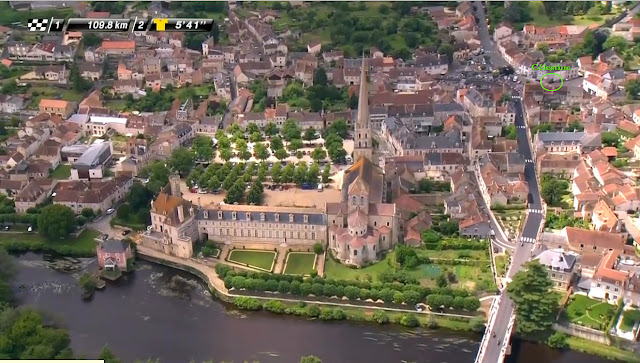 Interesting in that our (Elizabeth s) butterfly survey was just above that area. We always wondered exactly what they did there, but you never saw anyone to ask! We did the same yesterday http://inandaroundbraye.blogspot.fr/2016/07/tour-de-france-2016.html

Beautiful and unmistakable aerial view of Saint-Savin-sur-Gartempe. I wonder if the Chateau was finally rehabilitaded. The last time I was there it was in a sorry state.

We were there! Our position was just before the bridge on the left hand side. We thought we saw Celestine parked as we drove towards Nalliers.

What a shame we didn't see you! We were with Antoinette and Niall and various visiting friends.