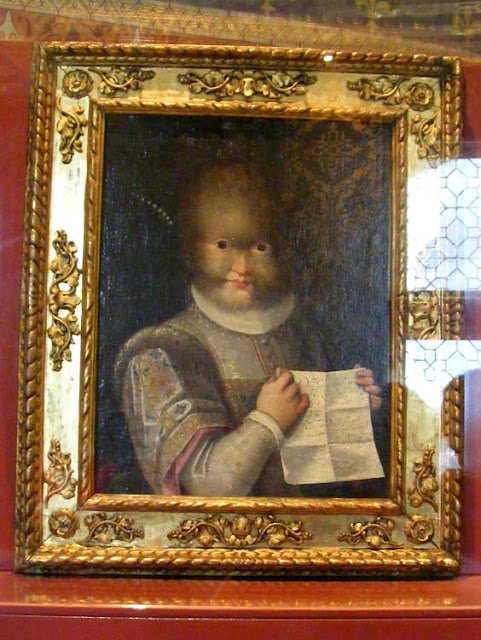 The first is the obviously unusual subject. Her name is Antonietta Gonzales and she had a very rare inherited condition, called Ambras syndrome, werewolf syndrome (or hypertrichosis universalis). She was the youngest of three sisters and two brothers, all of whom had inherited their father's genetic disorder. It meant that they were covered in hair, much more than an ordinary person. The Gonzales family were great natural curiosities from the Renaissance period. Scientists of the time were intrigued. They were considered exotic wonders and were feted by several European courts. Surprisingly, their mother was a normal, rather attractive woman, and the family in many ways lived a normal life. The oldest of the girls married, and Antonietta may well have gone on to do so if she had not died young.

Unlike what would have happened to them in the 19th century, they were not put on display as freaks. They were examined by several doctors who described them, but did not suggest any treatment. Instead Antonietta's father and brothers were given minor positions at court and the family might be thought of as similar to the dwarves that lived at court. They were favourites, sponsored and protected, servants but not prisonners. Their aristocratic patrons ensured that they were well dressed and well educated. Various drawings and portraits of members of the family were made and distributed as there was a burgeoning interest in the 16th century in scientific curiosities.

The portrait dates from 1595 and the second extraordinary thing about it is that it is painted by a woman, Lavinia Fontana. The paper Antonietta is holding says that Pedro Gonzales was discovered on the Canary Islands and that she is his daughter. It says that Pedro was sent to Henri II of France and that she was subsequently sent to live in the household of the Marchesa Isabella Pallavicina of Soragna, in Parma. It seems likely that Lavinia met Antonietta as a little girl in Parma.

Lavinia is the first female to become a professional independent painter. She is also the first woman to paint female nudes and supported a family of thirteen by her work. Born in Bologna, her father was also a painter. When she married (and had eleven children!) her husband looked after the family and acted as her studio assistant.

What an incredible story. And how amazing that Pedro met someone
who wanted to marry him. I wonder whether there were grandchildren
and how long the gene remained dominant.

It is interesting that he seems to have been an exciting curiosity rather than demonised for being different. Thanks to Henri II he had a good job and prospects, so I think he was a good catch. Theoretically women had the right to refuse to marry a man chosen by their family for them, but in practice I imagine it rarely happened. I suspect Mme Gonzales' father saw an economic opportunity and arranged the marriage accordingly. I don't know if there were grandchildren or how long the gene manifested itself.

How very interesting! Where exactly is the portrait in the castle? I've never seen it.

It must be a new acquisition I think. I'd never seen it before either. It's in the Royal Apartments, in the room next to the one the Duke de Guise was assassinated in. The room has a full length portrait of Henri III, a bed and on the other side of the bed there used to be a portrait of the three Guise brothers. The portrait of Antonietta has been placed there and the Guise brothers moved elsewhere.

I forgot to mention that Pedro and his wife's story is the inspiration for the original Beauty and the Beast fairytale (written by a French woman).

Yes, I noticed when I went with my son in June that the Guise brothers had been removed but there was nothing else in their stead. I shall have to go and have a look.