Mum in her ground floor room with garden access. 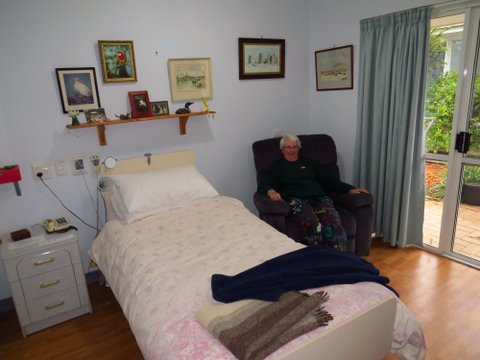 For about the last twelve months our family has been seriously discussing at what point my parents should give up the family home and move into the local Aged Care Facility. Even before that it was on the agenda and the last time I was in Australia I visited the complex with my sister and her husband and we met with the general manager, the director of nursing and several other people there. I was already somewhat familiar with the place as I had visited people there on occasion when I still lived in Australia.


Being visited by the dog, Bunjee. 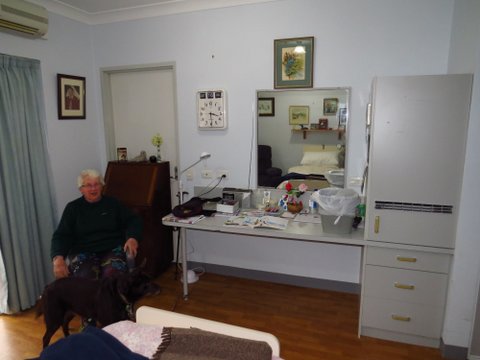 My mother has dementia. In general I can have a fairly normal conversation with her on the phone, but her attention span is not that great and she can no longer follow a rapid or complicated discussion. She's fine on the weather and what she's been doing recently (although she sometimes mixes days and events up) but she doesn't follow current affairs any more. She gets muddled and stressed if her routine is upset too much. Her eyesight is also failing, and the combination of that and her dementia means that she gets disorientated very easily outside the home, even in the supermarket and the main shopping street in the small town where she lives and has been going to for decades. She has glaucoma and wet macular degeneration, so she needs big print and good light. Nevertheless, she is a devotee of colouring in for grownups (currently very trendy) and loves the new gel pens one can get these days as they make very clear bright colours.


On the wall a photo of my mother in her early twenties,
as a newly qualified triple certificate nursing sister. 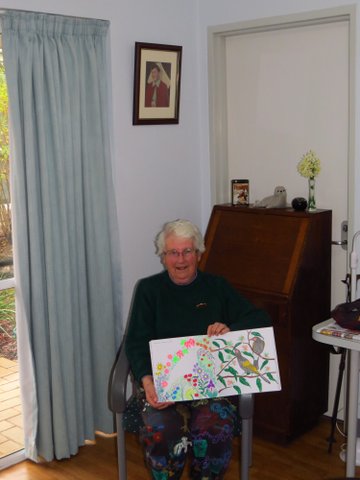 In the last couple of years my mother's condition has meant that my father has had to learn to cook and grocery shop. Mum has got to the stage where she can't follow a recipe any more and forgets ingredients or steps even in dishes she knows well. She was also prone to forgetting she had taken something out of the freezer for dinner, and taking something else out. Nevertheless they were managing to stay in their own home with the help of a care package which included someone who cleaned and did the ironing, and a gardener.

However, my father has Parkinsons and was finding that making sure Mum was alright and dealing with her memory loss and frustration with herself was increasingly hard on him. When Mum is frightened or frustrated she has a tendency to lash out at Dad, which he finds deeply upsetting. In many ways my sister and I were always more worried about him than Mum.

Anyway, to cut a long story short, a place came up at the local Aged Care Facility and was offered to Mum. After consulting with my sister and me, my parents have decided that it was the best solution for them now. It's a huge change for them, but Dad visits every day (Mum is only a few blocks away from the family home) and their dog is welcome to visit too. They still go out as a couple to social events at least twice a week. Dad has hung lots of pictures from their home in her room and installed some of her own furniture, such as the desk made for her by her father's foreman when she was a teenager. He also has negotiated a new home care package for himself which includes more services, such as someone who brings firewood up to the house and will clean the gutters when necessary.

My mother has known many of the residents and staff at the centre for a long time. She often can't remember their names, but she knows she's friends with them. The centre is well designed and the food is good. The residents are looked after by caring professionals. My father hung a photo of my mother as a young nurse in her room because he thought it was a nice likeness of her, and because he wanted to remind people that my mother was not always a little old lady. In fact, she was a nurse specialising in aged care and home nursing, just like the people who care for her now. I thought it was a particularly nice touch.

Photos courtesy of my father.
Posted by Susan at 09:00

As someone said : You should not get old! The way people age is different depending on the individual. I feel for your father who has to deal with your mother's loss of memory. Unfortunately, it's not going to improve and it will be harder and harder for him as your mother's condition deteriorates. Please, give them both my best wishes if they remember me.

Bon courage, Susan. It's hard to be so far away from people the way we are. I have a good memory of your parents coming to our place a few years ago.

it is good that your parents made that decision themselves and that there is a decent place for them to choose. I know it's hard with you being so far away too. seems like your Mom is being well taken care of

Dad says hi and he remembers you very well.

I know they enjoyed meeting you guys as well.

I feel we are very lucky that they live in a small town with such a good facility.

Recognising the need and making the decision was the important first step. It The regular telephone and email dialogue you have will continue to be a support to them. Your mother looks settled and content. Courage.

I can empathise with you as my 95 year old father lives some distance from me. He on QLD's Gold Coast and me in Victoria. I only just this minute finished talking to him on the phone. He is quite sharp but occasionally will lapse into a familiar conversation from a previous conversation but generally doing OK and is fortunate that he lives with my sister. He loves the weather up there. I guess we both agonise over our parents when we are so far away Susan.