You don't catch me in a bird hide very often, but on this occasion I was with my sister and her husband, both keen birdwatchers, and we had been recommended this particular hide by a young French wildlife photographer we had encountered on an earlier walk in the Brenne. 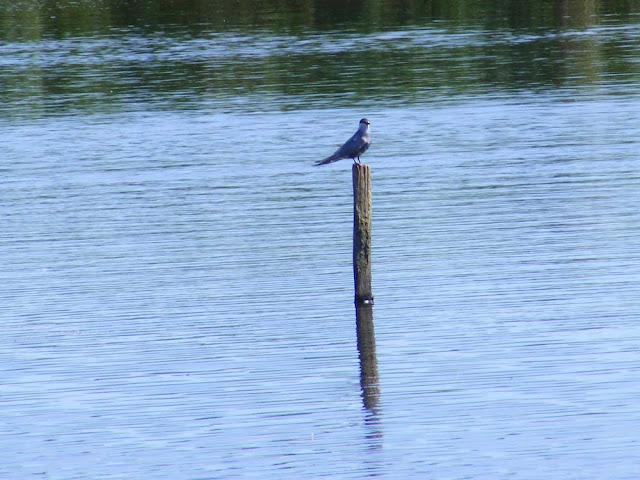 The League pour la Protection des Oiseaux (LPO) have set up a hide on the Étang de la Sous in the Brenne. We were told that it is one of the best places to see Whiskered Terns and raptors. It turned out to be full of Dutch blokes with huge lenses and motor drives, but it's a big hide, so we didn't feel squeezed out.


A Whiskered Tern collecting nesting material from the surface of the water (floating sticks and reeds). 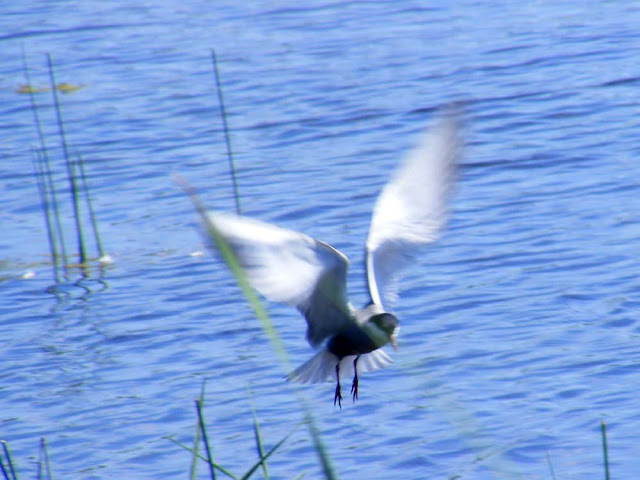 The Whiskered Terns have black heads and dark grey bodies which make their pure white cheeks really stand out. Their beaks are dark red and they have a deep notch in their tails.


Success! and a dripping stick is borne away to the nesting colony. 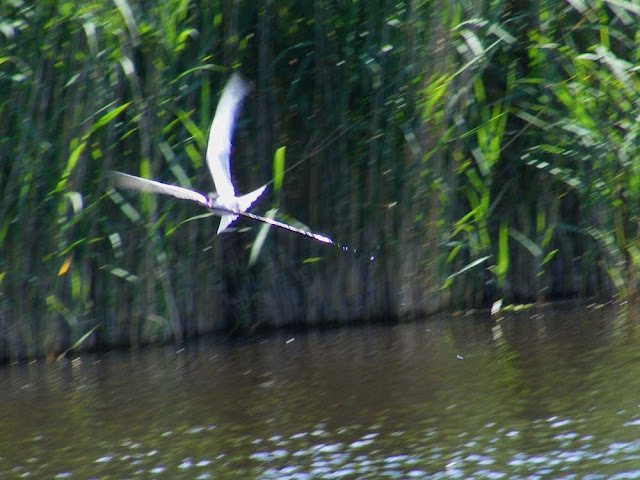 They are the largest of the 'marsh' terns (species in the same family as gulls, Laridae) as opposed to Sterna spp terns, which have their own family, Sternidae. In French the vernacular names reflect this split, with marsh terns known as guifettes and Sterna spp terns known as sternes. Whiskered Terns breed in freshwater marshes, fishponds and other ponds with emergent vegetation.


View from the hide over the étang. 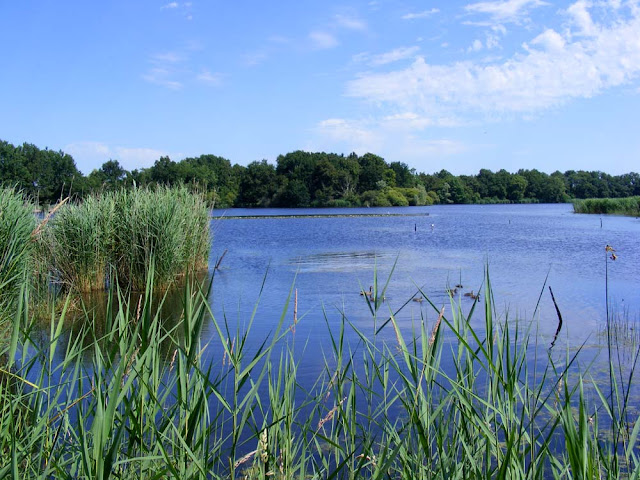 They are migratory, and come to the Brenne to breed in the summer. The Brenne is the second most important breeding area for the species in Europe. Like lots of our migratory birds in central France they overwinter in Africa. Once breeding has finished you can see them gathered together on the ground in large colonies. The next morning they will take off for their feeding grounds for the day. On the wing almost constantly, they hunt insects on the surface of the water. When they spot something to eat (a dragonfly, aquatic larvae or tadpole), they hover just above the water, then dart down and snap the insect up. They fly gracefully and rapidly.


The nesting colony of Whiskered Terns. 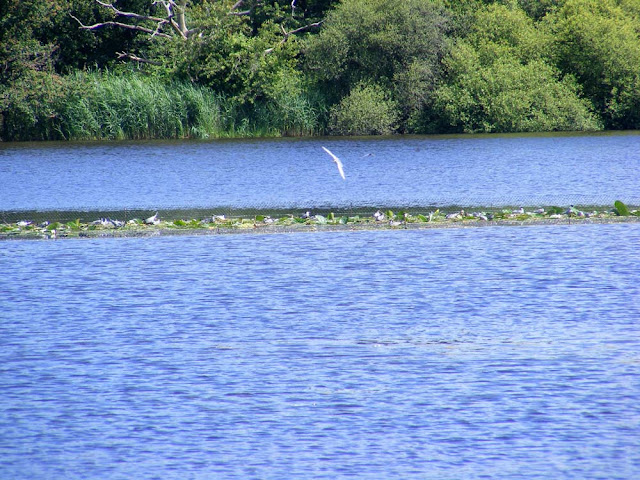 Widely distributed and not at risk globally, they are threatened in some areas by the usual suspects -- habitat destruction in the form of drainage of wetlands, canalisation of rivers, eutrophication of water (excessive nutrient levels in the water, usually agricultural runoff), disappearance of submerged vegetation and disturbance from tourism and aquatic sports.


The fence protecting the colony. There is a Coypu on the right. 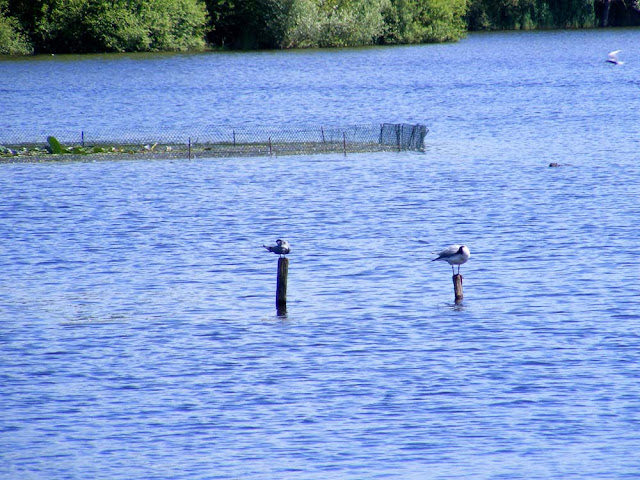 The nest is constructed on semi floating vegetation, such as the water lilies shown in the photos. The nesting platform has been fenced off, I presume to protect the birds from some sort of disturbance. There is a Coypu cruising around in one of the photos and perhaps they could blunder through the colony and tip eggs or chicks into the drink. Coypus are vegetarian so I don't think they would steal the eggs or chicks to eat, and the terns seemed unbothered by the presence of one close to the colony. Mink would be a problem, but I don't think they occur here. The birds often choose to nest in the company of Black-headed Gulls. These noisy and bolshy gulls apparently provide a level of protection for the terns.


An artfully positioned dead tree serves as a perch for Black-headed Gulls. 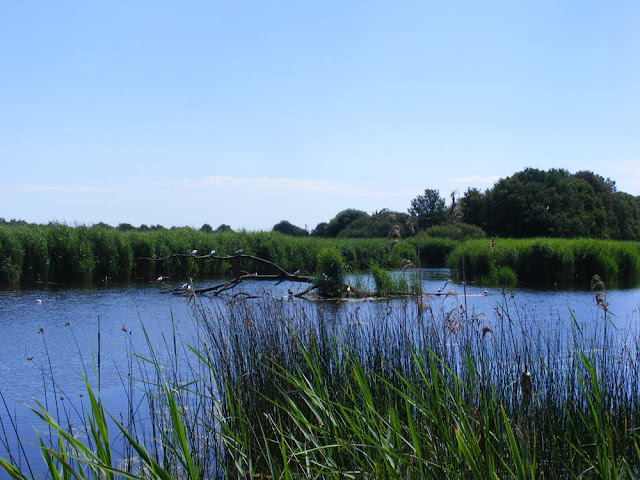 There are three sub-species of Whiskered Tern, one of which occurs in Australia, so I have probably seen this species before in fact. The Australasian sub-species is paler than the one we get in France apparently. The colonies in the Brenne are closely monitored and chicks are ringed every year. They are delightful birds and worth stopping off to see even if you are not a birdwatcher.


Dear Brits: Simon brought this blog post by a young Bosnian engineer to my attention. It's a polite version of a sentiment I am seeing from eastern Europeans in general about what they think of Britain's decision to quit the EU. The less polite version goes more like:

I'm tired of reading about calls to emphatise (sic) with illiterate xenophobes whose position we must understand because they have been "left behind"... Tell it to their peers in Bratislava, Ljubljana, Riga, Warsaw or Zagreb.

I'm a European who lived through hyperinflation in the 1980s, a full scale war in the 1990s, pandemic corruption in the 2000s, endured an entire decade of my country's EU membership negotiations along with war crime tribunals, followed by six years straight of recession (a world record) and I am now looking forward to about ten years of austerity programs along with a happy little fascist revival televised live...
To say you people are spoiled brats, ...would be a[n] ... understatement...
... Perhaps Britain was once great. Yesterday it was just one European country out of many. But today it is even less than that. It's just a lonely little island with an inflated sense of importance. Take your 350 mil a week and choke on it.


The above is an extract from a comment on a Guardian article the day after the referendum, by someone who calls themselves SardinesForDinner and is presumably Serbian. It immediately resonated with me, as does the Bosnian post. I wasn't always an EU citizen. I was once a Commonwealth citizen living in Britain. Luckily for me, when my original 4 year work visa expired, my boss offered to arrange and pay for fast tracked British citizenship for me. An Australian colleague was not so lucky and she decided that she no longer wanted to deal with the annual phaff, expense and inconvenience of applying for permission to live and work in Britain. After 10 years in the UK she returned to Australia.

Brexit is a regular topic at the swimming pool where I go daily. Most French people are sympathetic to my views, but I have also been harangued by a complete stranger who couldn't see what the problem was. He felt his message was important enough to interrupt my conversation with an acquaintance (who is of North African descent). The arguments he trotted out sounded exactly like the Brexiteers (eg Britain has the Commonwealth...). His grasp of politics was such that he couldn't remember the name of the Chancellor of Germany though.

I've been through the standard gamut of emotions after the referendum -- shock, disbelief, anger, resignation. Now I'm just irritated at the thought of all the paperwork that will come and the appalling waste of time and money it all is, just because a certain sector of the British public continues to see themselves as victims of the Thatcher years and wanted to give the Conservative government a kicking.

Our property and business is in France. I'm an EU resident by choice. I won't ever go back to live in the UK (and will think seriously before I go back to visit in the future). The culture of envy and the conviction of many British that everyone else is richer and/or less deserving than they are that I first noticed when we moved to England nearly 20 years ago has become insupportable. Many of these people see themselves as the custodians of working class values but the reality is that their truculence and mindless anti-elitism traps them (and now everyone else) in a situation they are only too willing to be directed to blame on Europe.

Email ThisBlogThis!Share to TwitterShare to FacebookShare to Pinterest
Labels: Australia, nature and wildlife, the Brenne

Very sensible post, Susan. For somebody who's not involved like me, the workings of politics are difficult to grasp. I just hope Brexit will be as painless as possible for all British expats.

" It turned out to be full of Dutch blokes with huge lenses and motor drives..."....
I think the Dutch wildlife photographers camp out in the Brenne hides during July and August!!
The always seem to be there, or one of the others!!
Even some of the cameras look very small next to the lenses....
but, in my book, 100-600mm zoom lenses and motor-drives are a macho-photographer thing...
About four years back there were three of them photographing dragonflies at the Cherrine... the lens mounted on a gimbal on the tripod... the camera was this insignificant box on the opposite end to the objective.
There was only one snag, they had effectively blocked the boardwalk to the Cistude hide at the Maison de la Nature... everyone had to step around the tripod... they stood aside to let people do this... but with much tutting... we shouldn't have been there!!
Pillocks!

That "artfully positioned dead tree serves as a perch" for all sorts of things... and, because of its position, seems to appear in wildlife photograph magazines everywhere I look....

I love your comments on Brexit and the possible Serbian's views... and I agree with every word of that.... I am ashamed of certain of my fellow countrymen and saddened that they haven't the intelligence to realise that they are being lied to... or the ability/care to try and find out!!

Your comments on the Britons re Brexit sound to me a lot like description of some of the US supporters who would want to elect the vulgar orange yam.
Britain does one thing very right, however, its election process is much shorter. We still have nearly four months to go. ::sigh::