Last Thursday afternoon I was relaxing on the apéro terrace, listening to the radio. All was peaceful and calm.

I went into the house to get a drink and could hear a buzzing noise, which on investigation was coming from 3 or 4 bees trapped inside the laundry. I called Susan over to confirm they were actually bees; most peculiar, I though, and headed outside.

It was then I notice a large number (>100) of bees trying to fly into the exhaust fan for the downstairs toilet, and crawling around the edge of the vent cover. This is a problem at this time of year as bees leave their hives and investigate places to start a new hive. They had obiously crawled around the outside of the fan and into the cavity between the outer brick wall and the plasterboard in the toilet - exactly the kind of place you dont want a bee hive!


Even after taping the holes shut the bees were still trying to get in. 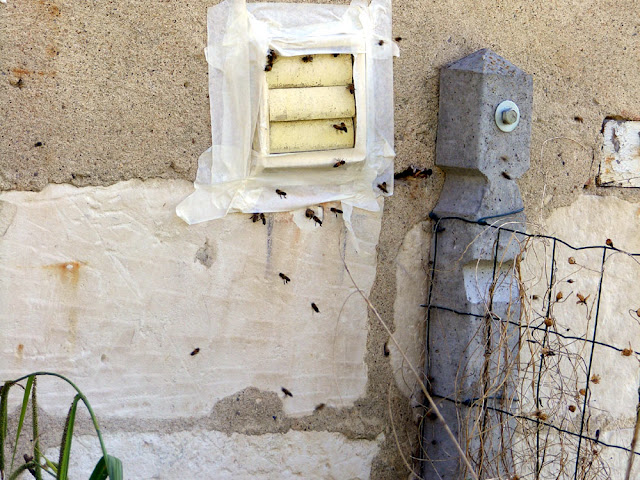 I called Susan, and we decided that while she kept them away using a feather duster, I would try to tape the gaps shut as a temporary measure (we are intending to have that wall rendered). This we achieved eventually - I am nervous around bees, not scared, but with no wish to be stung.

Unfortunately I wasn't wearing action doing stuff trousers, but a pair of linen drawstring pants. I could feel them slipping as I reached across the fence to apply the tape. Yes, I was wearing underwear, as anyone in the vicinity can confirm. I still felt rather vulnerable... 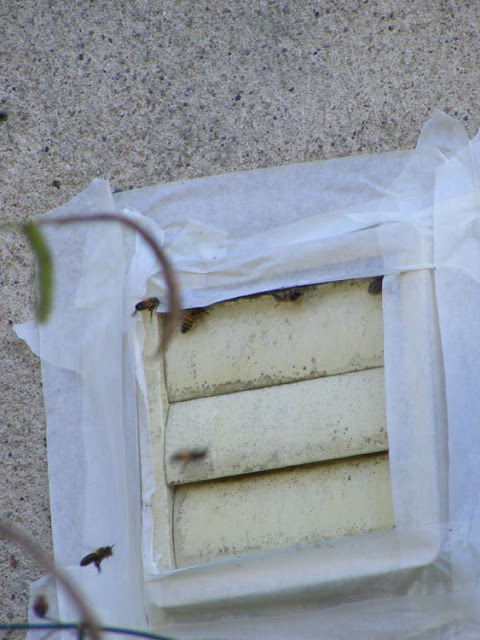 Anyway - tape applied (and after taping up the identical vent for the upstairs bathroom) it took a couple of hours for the bees to disperse. Yes, I climbed a tall scary ladder in a cloud of bees wearing untrustworthy trousers, but that's what makes me a hero!
Posted by Simon at 09:00

Email ThisBlogThis!Share to TwitterShare to FacebookShare to Pinterest
Labels: nature and wildlife, Our house in Preuilly

Not possible - remember, Susan was doing bee wafting with a feather duster. If she had stopped wafting to take a photo I would have been less than impressed...

The blog world is abuzz...

And not a single sting? You are a braver person than I - hope they don't return, not that they have obviously decided your house is a good choice of home!

These were just scouts, they didn't have their queen with them, so they shouldn't return now. We managed not to squash any, so they remained peaceable.