While we were in Paris we visited the Army Museum, which is vast. The thing that first drew us there was the display of models made by Vauban of the fortifications he built for Louis XIV.

We had previous seen some Vauban models at the Musée des Beaux Arts in Lille (which has the second biggest collection) and had intended to see the rest at a display at the Grand Palais in 2012 (but didn't when we saw the queue out the door in perishing weather). We have also seen a number of the fortifications: at Lille, Calais, and Ile-Saint-Martin, where we stayed in a campsite built against the walls (as seen in the photo at the bottom of this post).

Maréchal Vauban (more properly Sébastien Le Prestre de Vauban) was born in 1633 at Saint-Léger-de-Foucherets, France (now Saint-Léger-Vauban) the son of a family of the petty nobility. As a young man he enlisted as a Cadet in the army of the Prince de Condé, a rebel fighting against France. After being captured by royal troops in 1653 he changed sides, and in 1655 joined the newly-formed engineer corps in the army of Louis XIV. He proved himself to be a good soldier and brilliant engineer and had rapid promotion.

Vauban's statue - at the opposide end of les Invalides to the square named in his honour. 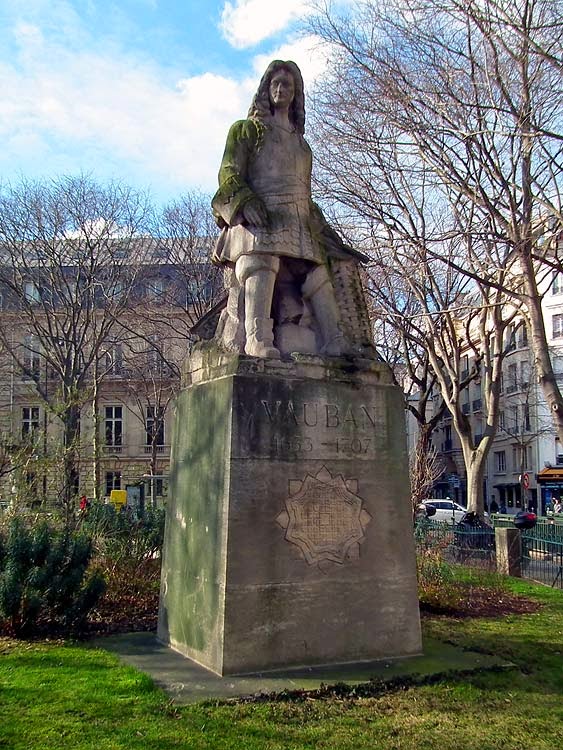 After the rebellion Vauban undertook his first fortification work, working on various places in Alsace-Lorraine (near the German border). In Nancy, he was involved in the demolition of fortifications, and saw new fortifications constructed at Alt-Breisach, on the Rhine.

When war broke out again it was against the Spanish in the Low Countries, and Vauban found himself on the front lines once more. He played an important part in the capture of the cities of Tournai, Douai and Lille, and was rewarded with a pension, a position in the Royal Guards and the governorship of the citadel of Lille, which he had constructed.

Ile Saint Martin from the sea - the models are about 1:600 and incredibly detailed. 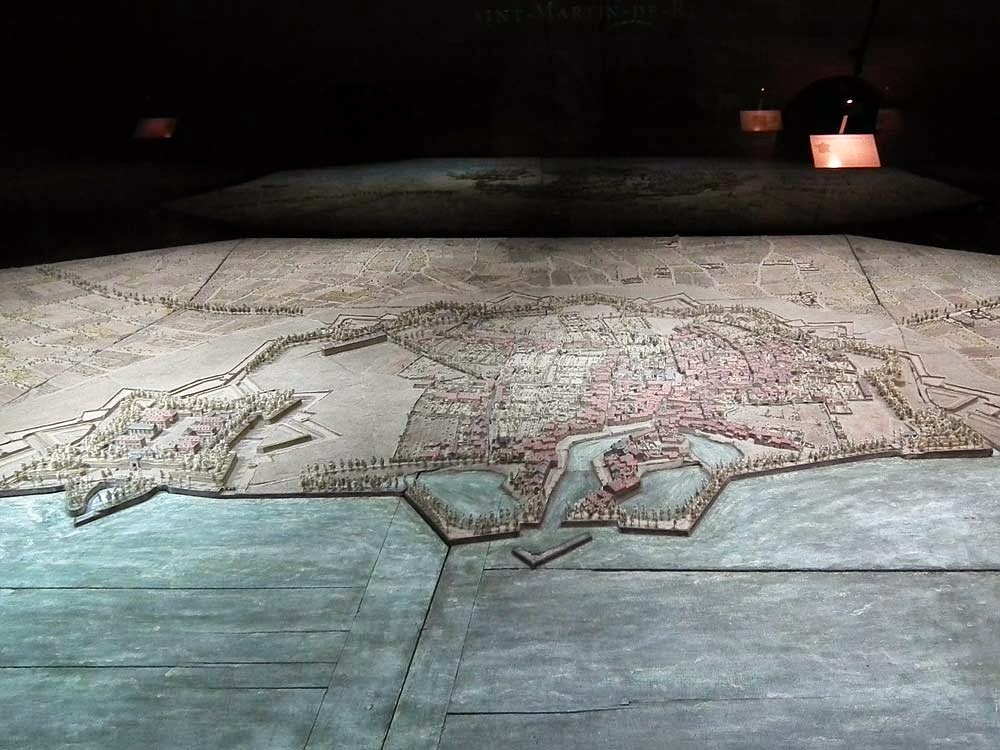 He assumed the duties of the Commisary General of Fortifications and after the war in the Spanish Netherlands. His new duties took him all over France, inspecting existing fortifications and identifying new sites to be fortified. He became a trusted advisor of the king and worked closely with Louvois, Louis XIV's war minister. In this period of peace Vauban visited Roussillon to work on the fortifications there, but was also asked to advise the Duke of Savoy, at that point an ally of France, on fortifying his territory. This was unfortunate for France, which later went to war with the Duke.

Louis XIV went to war with the Dutch between 1672 and 1679, during which time Vauban proved himself as good at laying seige to towns as he was designing their defences. After the Dutch War, Vauban again set to work fortifying the new conquests and securing France's frontiers. He designed several fortresses during this time including Strasbourg, Luxembourg and Landau.

With the War of the Grand Alliance, Vauban gained the rank of Lieutenant-General and directed the siege of Philippsburg in 1688. After seeing much action during the war, he set about designing his last fortification work, the impressive Neuf-Brisach. This was a fortress town that was designed from scratch by Vauban, the inhabitants coming from the nearby town of Alt-Breisach, which had to be destroyed as a result of a treaty.

In 1703 Vauban was made a Maréchal of France, but was recalled from service later that year. In his retirement he wrote a treatise on fortification and siege warfare, which was reproduced in many different European languages and used for many years to come. In 1707 he published a controversial paper condemning the French government's unfair tax system and proposed a better system. His reforms were rejected by the king, and Vauban died shortly afterwards in 1707.

Ile-Saint Martin from inland. The campsite we visited in 2013 was just inside the nearest buttress. 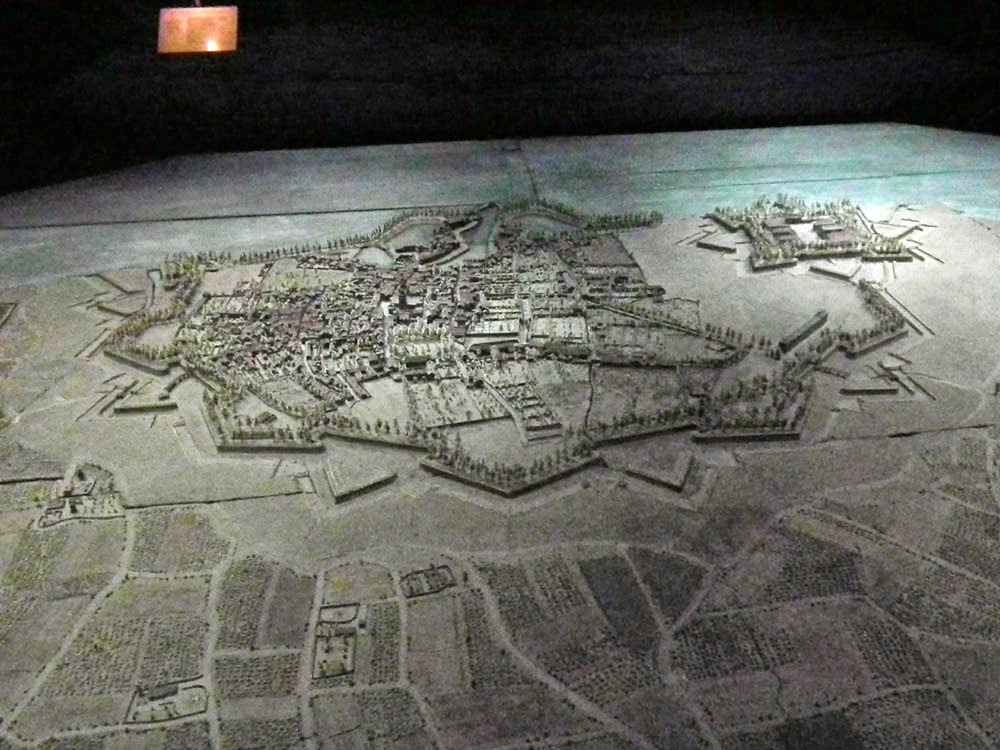 Vauban is also commemorated in Paris by statues and is buried near to Napoleon, a singular honour for a man employed by Louis XIV. 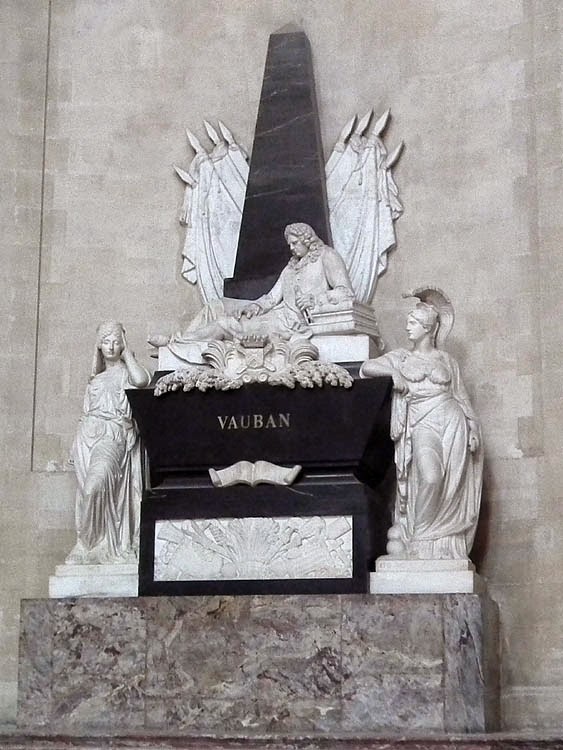 We visited Rocroi when we were "Walking the Valleys of the Meuse" [a Headwaters "two boot"* holiday] and were quartered in Revin.
As I remember it was a very "Pointy" village...
like those models.


*I don't know which member of the Marines decided that it was a "two boot" route...
but I have never been so blistered... and we mainly walked the ridges alongside...
where, thanks to tree growth, we hardly saw the river at all!

On the wood front, this winter seems to have been colder...
we've certainly gone through more wood and had to order more, also...
and the weather station has shown more air frosts than the last two.

The Méteo says this has been a fairly average winter in terms of rainfall and temperatures, just a bit low on sunshine hours.

Yes, I've just gone there on YahooMapz... it really is as I remembered it... there isn't a way of creeping up on it unobserved.

And as for temperatures measured here...
don't forget that this valley seems to have a microclimate all its own...
and our weather station is at the lowest point in the valley almost...

Very true. I'm always amazed at how different your weather can be from ours.