Officially these days the Cluny museum is la Musée national du Moyen Age (the National Museum of the Middle Ages). It is a superb museum, and makes it into my top three Paris museums (the other two are the Louvre and the Orangerie, since you ask, and if you want my top five, add the Petit Palais and either the Rodin Museum or the Musée Jacquemart-André).

For all that, until our early February visit this year, we had not been there for 13 years. I was shocked at how long ago it was!

The building is the former Hotel de Cluny, that is, the town house belonging to the Benedictine abbey of Cluny in Burgundy, which itself stands on the foundations of some Roman baths. The museum is not large, but it is a rabbit warren of complicated levels, passageways and linked rooms, and it doesn't have a cafe. Its collections of tapestries, carved wood, stone and above all, ivory, stained glass and objects such as reliquaries are outstanding. They are also displayed so you can get right up close to objects. With things like the stained glass this is especially fun. Stained glass in situ is always up high. So being able to see tiny details is a real thrill.

I've chosen some personal favourites from the permanent collection to show you below. Simon would choose different objects, more stone and wood I am sure.

If people know anything about the Cluny it is the Lady and the Unicorn Tapestries. They are justly world famous for the charm of their subject matter, the completeness of the set and the quality of the weaving. This one below is the last of the six, and the most mysterious. The others appear to represent the five senses, but the meaning of this one is uncertain. What does 'A mon seul desir' represent? In fact we know almost nothing about the tapestries. Stylistically they come from the late 15th century, but even stylistically they are unique in certain aspects. We have some hints about who commissioned them, but nothing certain. You could spend hours looking at all the detail and teasing out the riddles. I highly recommend the fictionalised account of their creation, The Lady and the Unicorn by Tracy Chevalier. You'll learn a lot about tapestry weaving and life in Europe in the late Middle Ages. 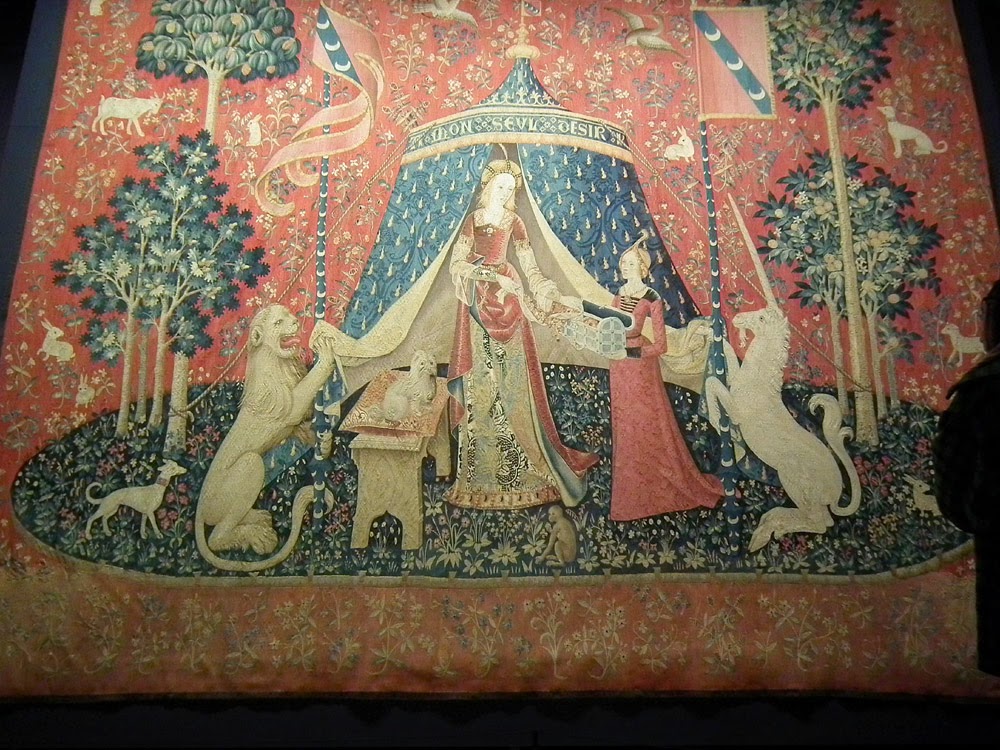 I chose the carved ivory casket with gilded copper fittings below not because it is the finest ivory carving in the collection, but because it is a secular object. By the early 14th century, when this was made, both men and women of aristocratic birth were addicted to courtly romance stories. All sorts of personal objects were decorated for the first time in centuries with scenes not from the Bible but with vignettes from tales with titles such as Assaut du Chateau d'Amour (Assault of the Chateau of Love). The Chateau d'Amour was defended by women who threw flowers... 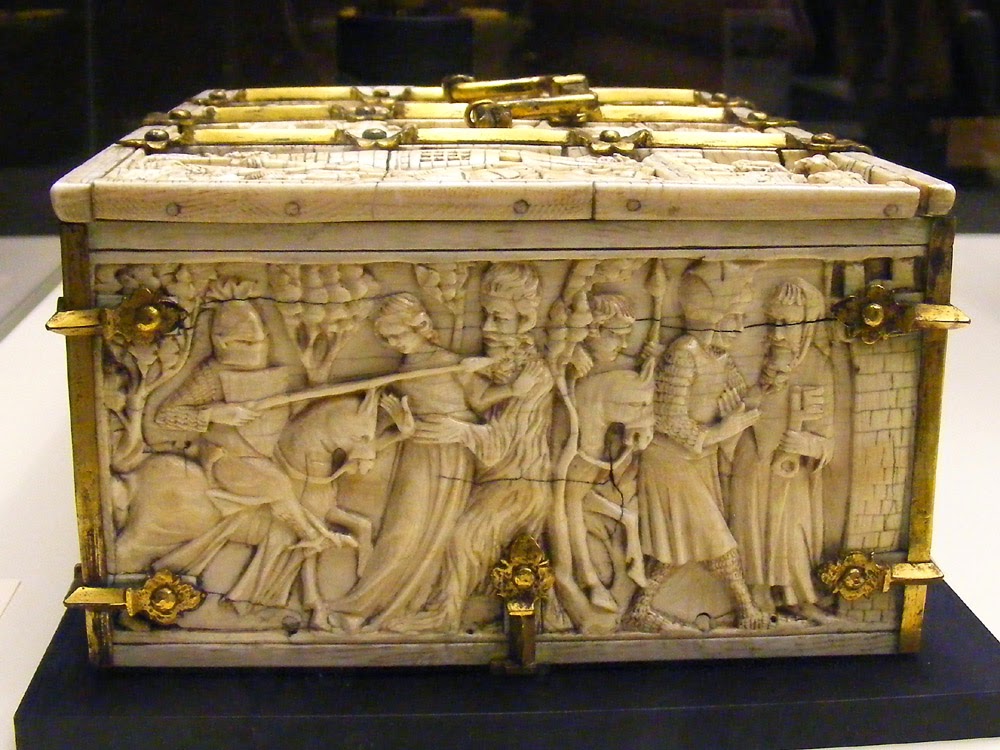 More unicorns. The Cluny's collection includes three aquamaniles, for pouring water for handwashing before a meal. The one below is made of a copper alloy but they were often ceramic. This one is a unicorn and they were often in the form of fantastic animals or beautiful women. It is German and dates from the late 13th or early 14th century. 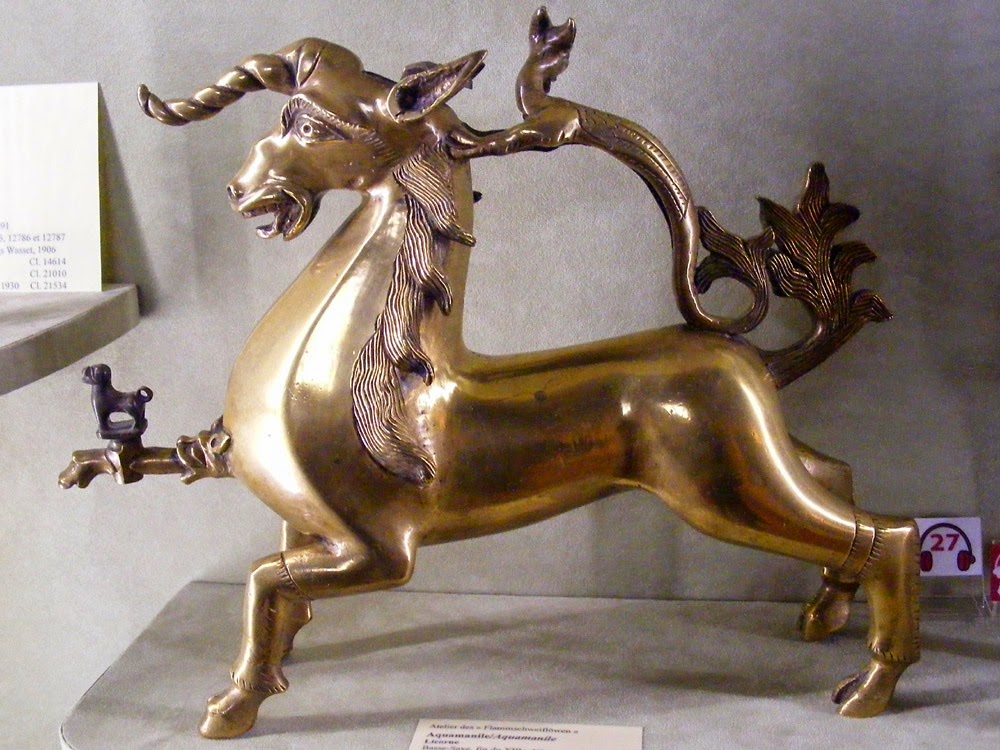 This instruction manual created to teach a late medieval German princeling how to fight is unexpectedly charming. The page at which it is open seems to be regularly changed. On the day we were there it was open with a fairly standard knightly thrust and parry manoeuvre being demonstrated on the right. The left is intriguing though. A girl armed with a slingshot is getting ready to bop a boy with a club, who is inexplicably standing in a hole... 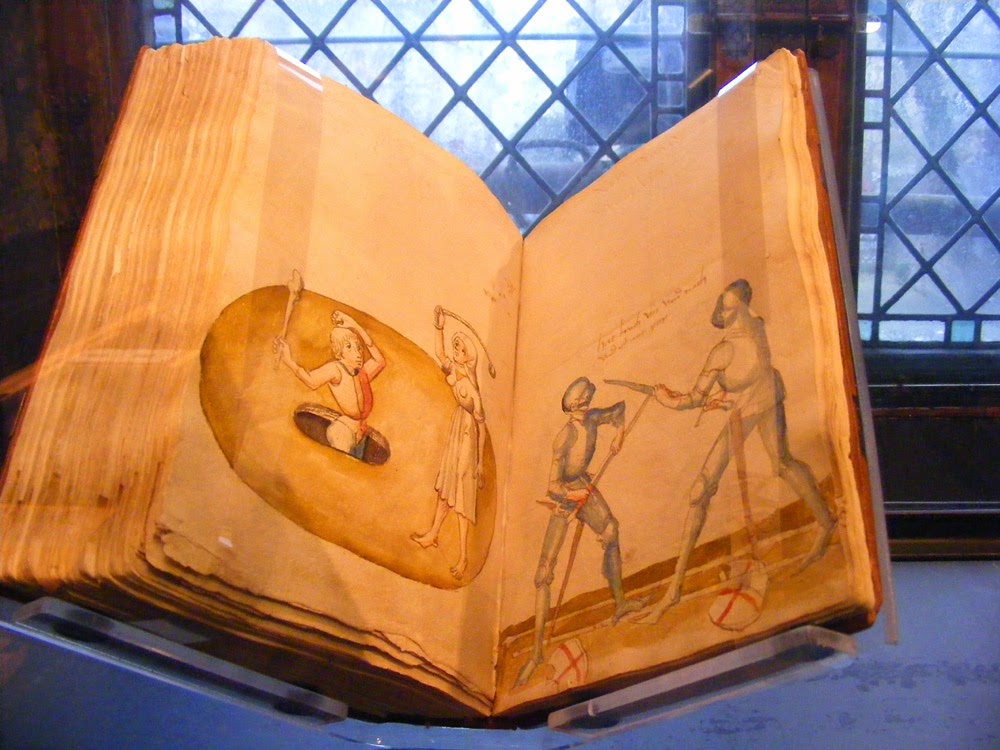 I chose the tapestry below (detail) not because it is one of my favourites, but because it has been so widely reproduced. You see small mass produced copies a couple of metres across hanging in private homes, restaurants and winery tasting rooms. The real tapestry, known as Les Vendanges (The Vintage) and dating from around 1500, is probably about 6 metres by 4 metres, so the characters are nearly life size and it depicts the grape harvest on the right and wine making on the left (which is what my detail shows). The reproductions often only show one half or the other (and of course are not actually tapestries, but jacquard loom woven). This tapestry seems to have sparked a fashion for scenes of the vendanges on tapestries and there are a number of other later examples of the genre. 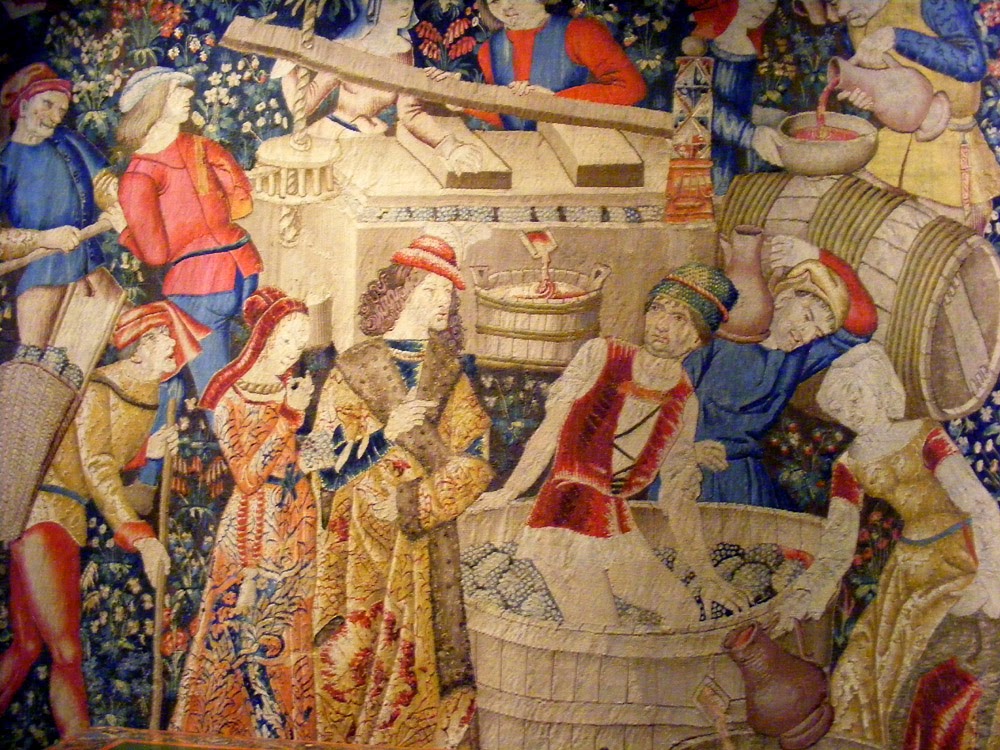 The tapestry below was chosen because the series of over 20 tapestries from Auxerre telling the legend of Saint Stephen (Saint Etienne) that it belongs to is amazing and because the detail shown in this photo may reassure those who have been perturbed by the kerfuffle over the current restoration project at the Cathedral of Chartres. One of the many criticisms levelled at the restoration is that the newly painted trompe l'oeil marbling on some of the columns is completely inappropriate and unauthentic. However, I was immediately struck by some of the architectural detail in some of the scenes of these tapestries -- the columns in this one are fairly clearly woven depictions of painted decoration intended to mimic marble. This series of tapestries is also a costume historian's dream come true. You have no idea how many possible versions and combinations of leg and footwear are displayed on the dozens of characters portrayed. I could spend hours studying this series. 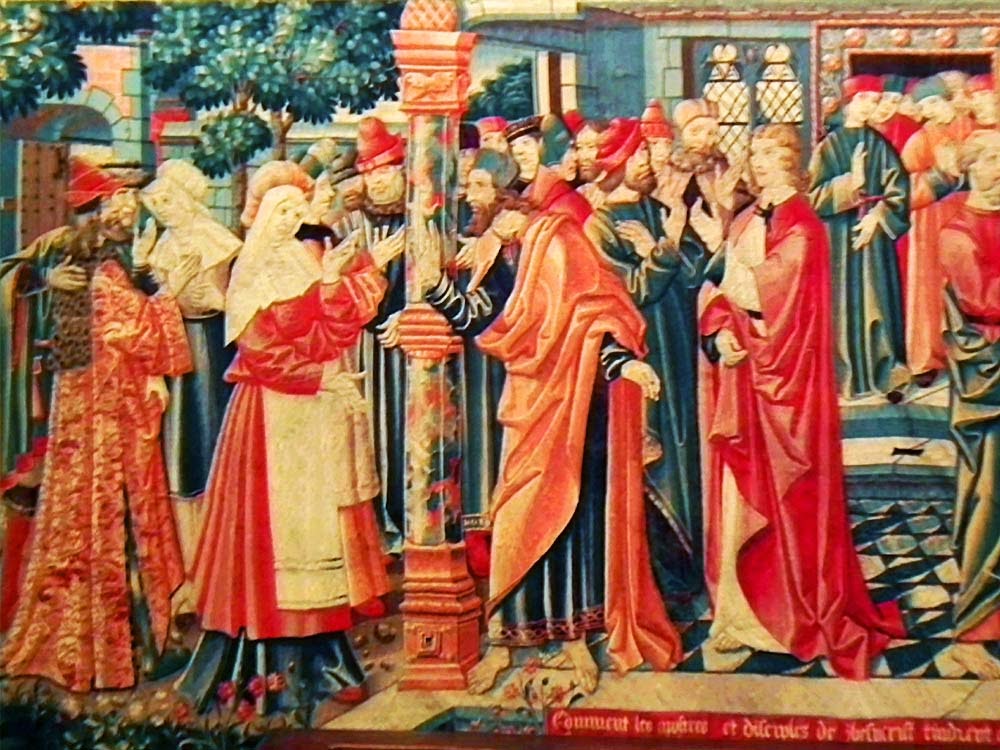 On the exterior of the building, looking up from the courtyard I was also struck by how similar the cat like creature under the first floor balustrade (below) is to the ones over the door at Ussé. 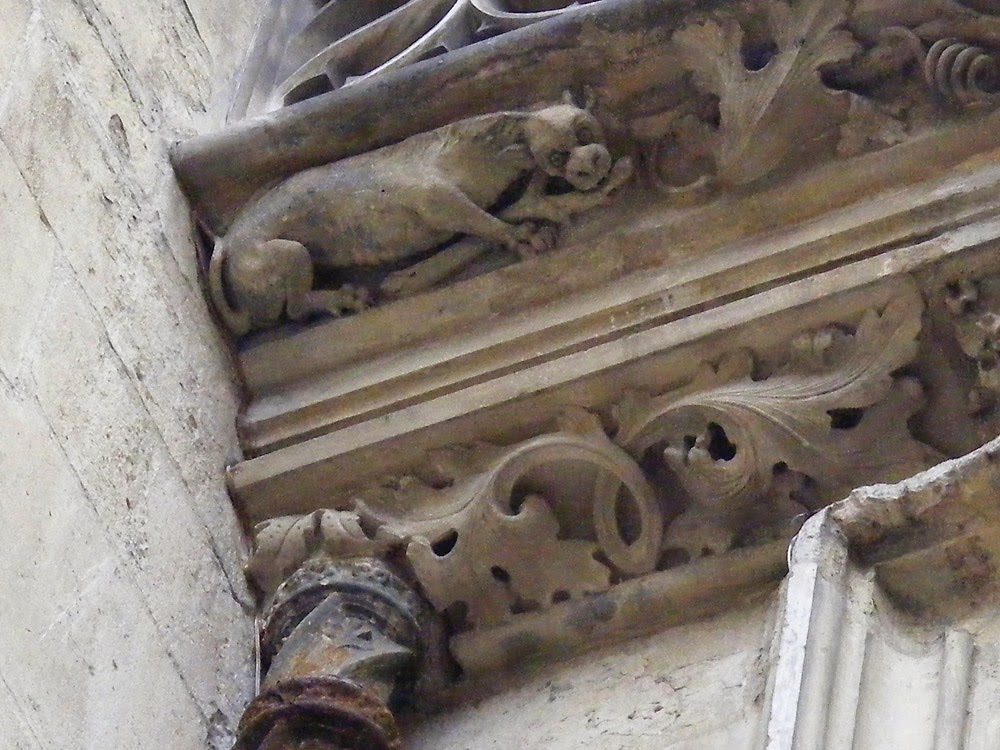 The guy in the middle...
wearing the red bowler hat...
just asked the guy treading the grapes if he washed his feet before starting.
"What, and lose all that flavour from yesterday?" replies the artisan, aghast!!

And I love "Beauty and the Beast" on the ivory casket...
wonderful post.

Yes, there is definitely a dialogue going on between the aristo and the artisan.