Flowers for the Fallen

For years when we went to Paris we stayed in the 19th, near the wonderful Parc de Buttes-Chaumont. But last year the family run hotel we used was sold to Ibis and the price of rooms doubled. We decided to look for somewhere else to base ourselves in Paris.


Boulevard Richard-Lenoir, I assume where the policeman was killed. 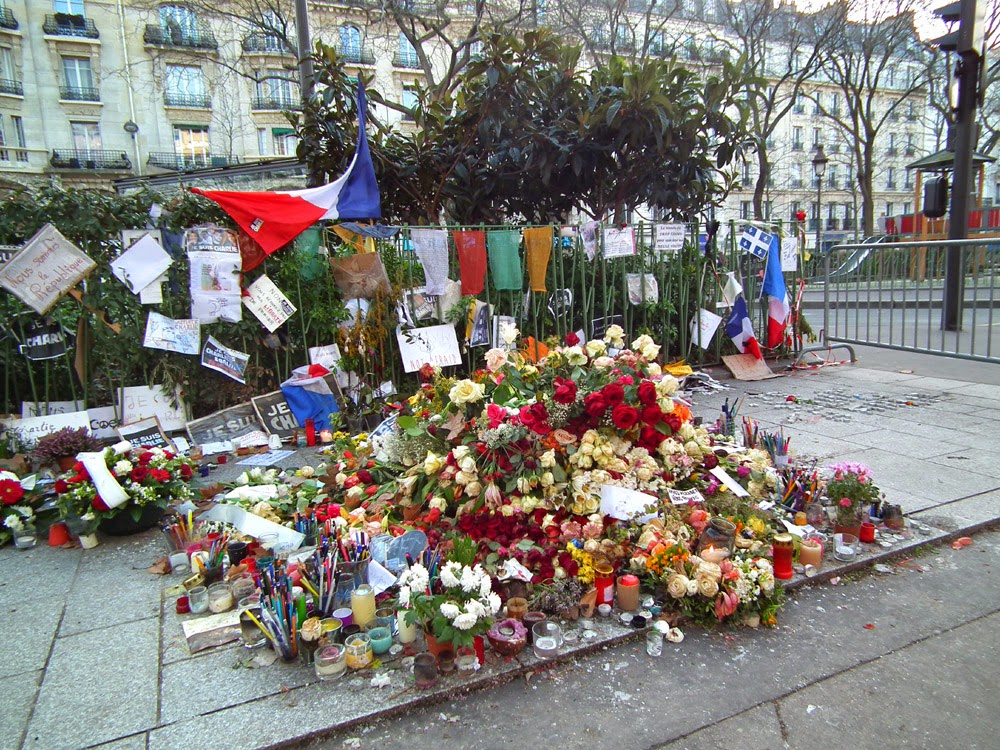 Last year our friend Liselle treated herself to a very nice apartment just off Place des Vosges and when we went up to spend some time with her we looked for somewhere close by but affordable. We found what we wanted in the Bastille area, just a few streets away from her. It was a ridiculously small apartment, barely bigger than a hotel room, but the price was much less and we liked the location very much. Consequently, on our last trip to Paris a couple of weeks ago we rented a bigger apartment, but in the same street.


This memorial site is further down Boulevard Richard-Lenoir
(perhaps where the jogger was shot?) 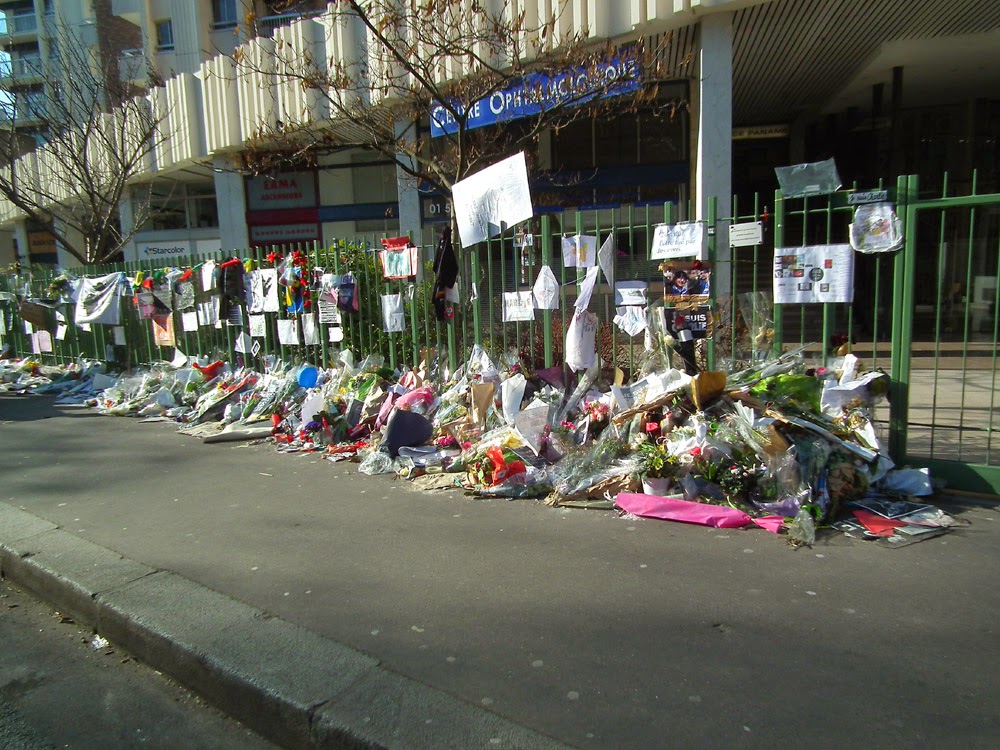 Our new Paris base is in an ordinary Parisian residential area. It has one of the best markets in the city and lots of great independent shops (food, clothing, music especially). Just our scene.


It is also where the offices of Charlie Hebdo were. Our apartment was no more than a few hundred metres away from horrific scenes of violence and terror.

It's no wonder the gunmen initially went to the wrong building -- mourners equally seem unclear about which one housed the Charlie Hebdo offices. There are three very similar looking buildings on the corner and huge piles of flowers and mementoes outside each. All appear to be blocks of flats, and you would never know there were offices inside on the lower floors. 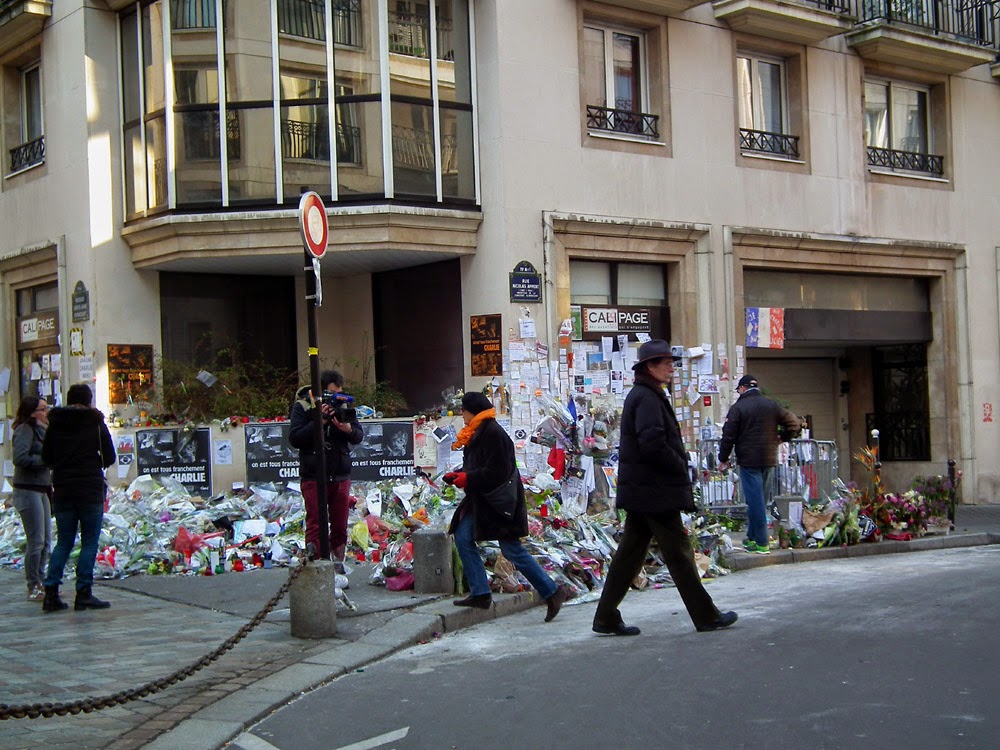 Someone has changed the name of the street as their means of commenting on the event. 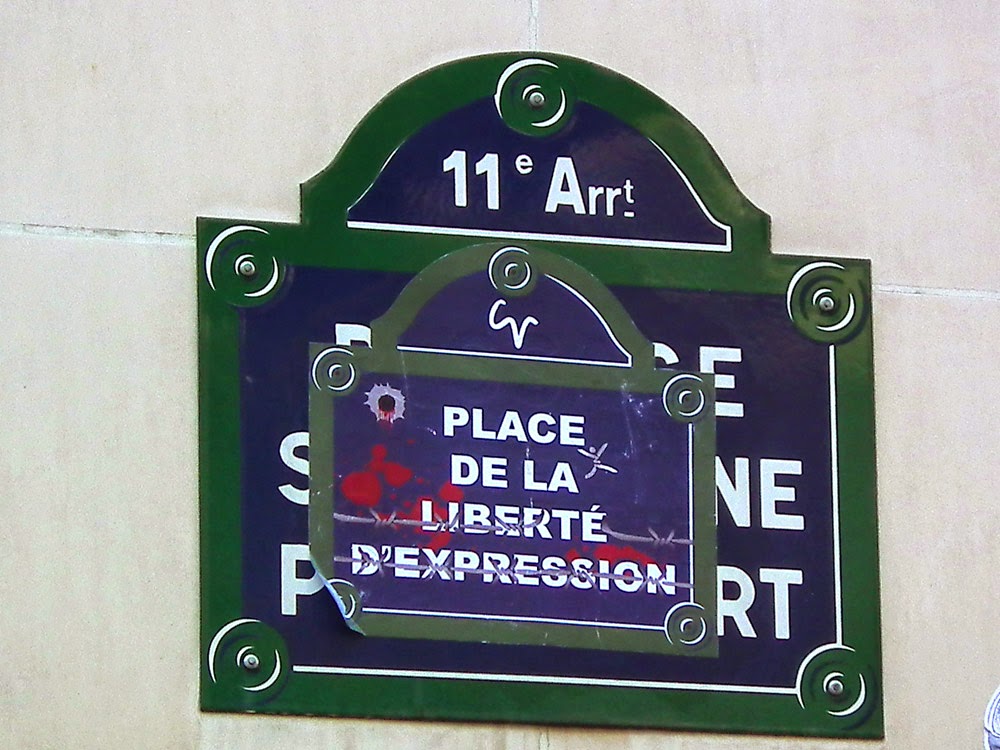 It is distinctly creepy walking these streets and seeing flowers, notes, cartoons and mementoes strewn everywhere by hundreds of people who felt they had to mark the tragic event. It's creepy because the event was so violent, and yet this is such an ordinary neighbourhood.


Many people have left not flowers but notes, poems and cartoons to express their feelings. 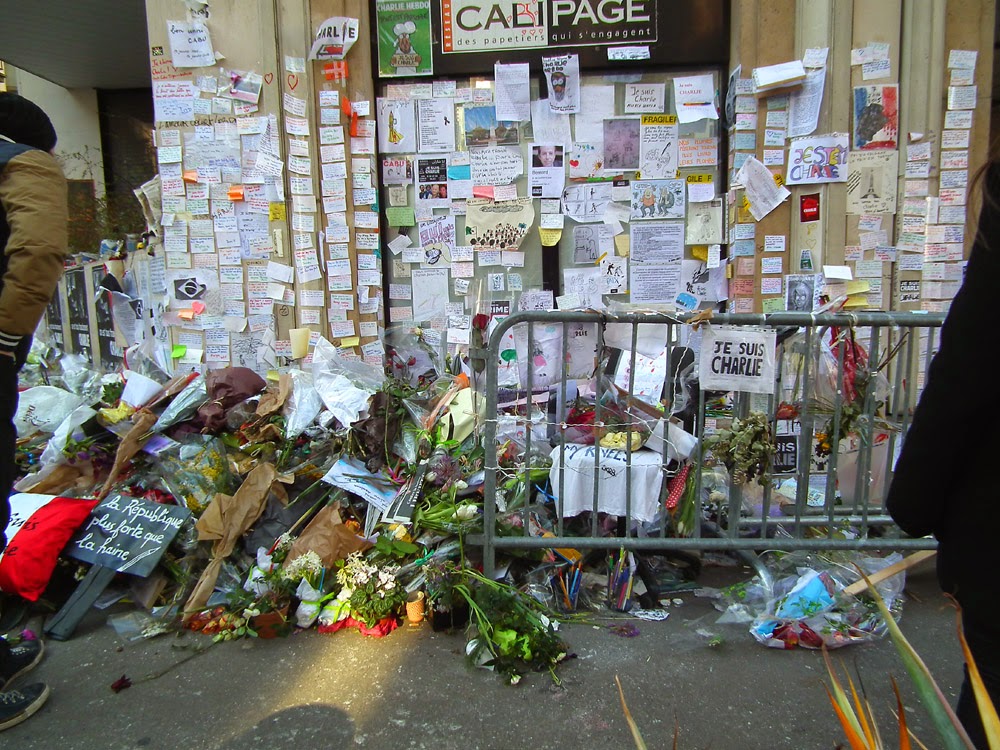 The memory of that killing spree won't put us off staying again in the area. It remains a nice comfortable ordinary neighbourhood, but now with a recent past that saddens. Soon the police on guard, the barricades and the piles of flowers will be gone. Many people going about their business in the area won't even think about the vicious rampage that went on here. But many will remember it all their lives.

The Foire au Safran is on in Preuilly sur Claise today. It is held in the communal gymnasium, and is a great place to pick up local (and not so local) produce. Susan always buys her vanilla pods and other spices direct from the man who brings them in from Réunion
Posted by Susan at 09:00

Thanks S&S for an insight into the normality behind the horrific events. Life moves on, but for many will be forever changed.

At the moment it's a weird combination of normal and not normal. You walk streets where everyone is going about their business as normal, but you imagine if it had been that day and how shocking, how frightening the shattering of normal must have been. Soon it will be back to real normal though, the only reminder of not normal being a plaque to acknowledge the event in rue Nicolas-Appert, just like all the other plaques in the city to tell visitors of historical events.

My favourite area of Paris too - my regular home exchange partner lives not far away. It's all too depressing.

Beautifully expressed. Martin Place is the same. Life returns to "normal" and the sea of flowers and candles becomes a plaque that people walk by without noticing. The apartment was a real treat, and the area has become my firm favourite as well. As you suggest there are many corners of Paris that have seen their fair share of violence over time. Its good to be able to celebrate the life that returns to all of them in time.

The authorities did rather a kind thing in Sydney. As it was high summer when the flowers were laid they obviously had to be removed quite soon. Volunteers removed all the cards and other expressions of sympathy to be preserved, separated out the wrappings, and the flowers were removed to be made into compost. It was comforting to see that each bouquet was handling individually and with respect.