I said I love the Métro and mentioned that it is the respect for its own heritage that I really like. Here are yet more examples: 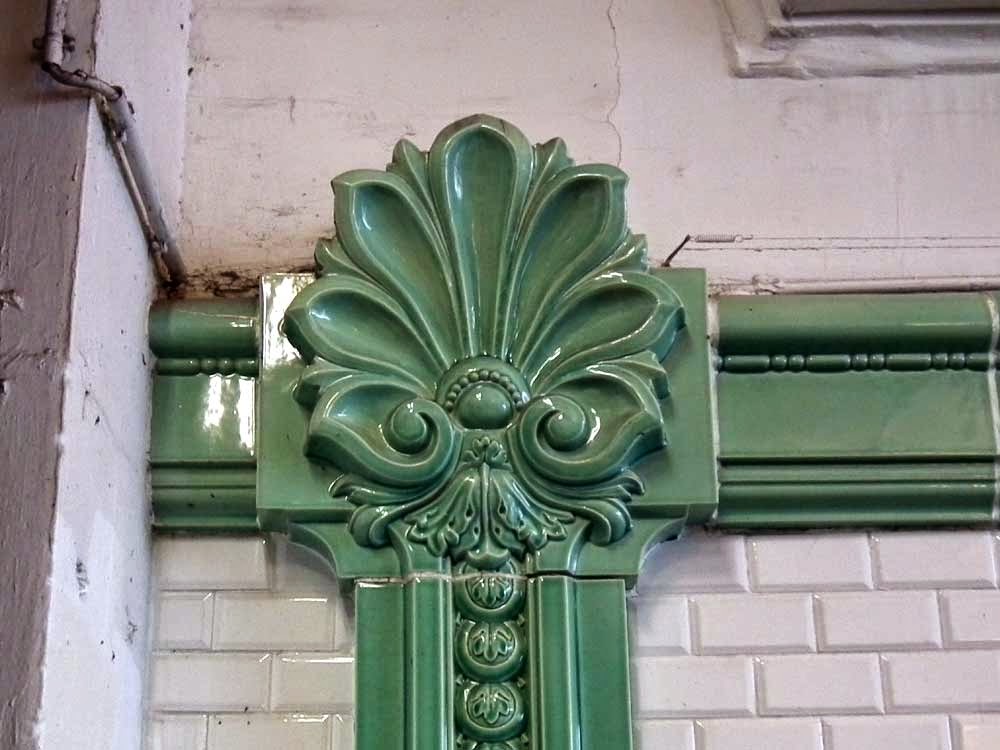 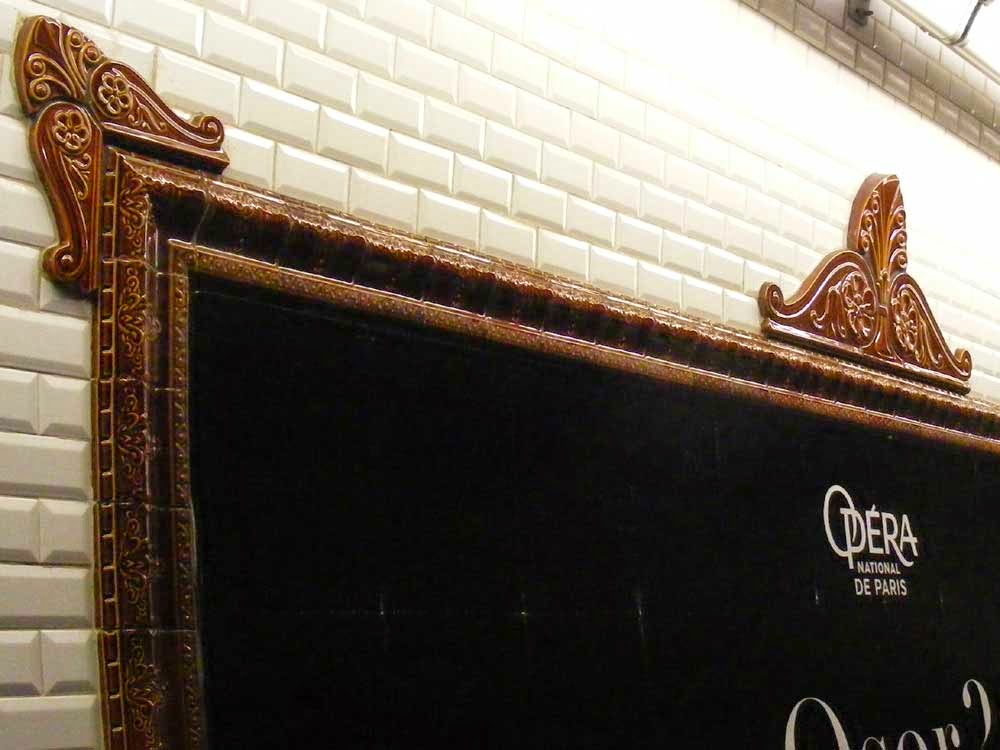 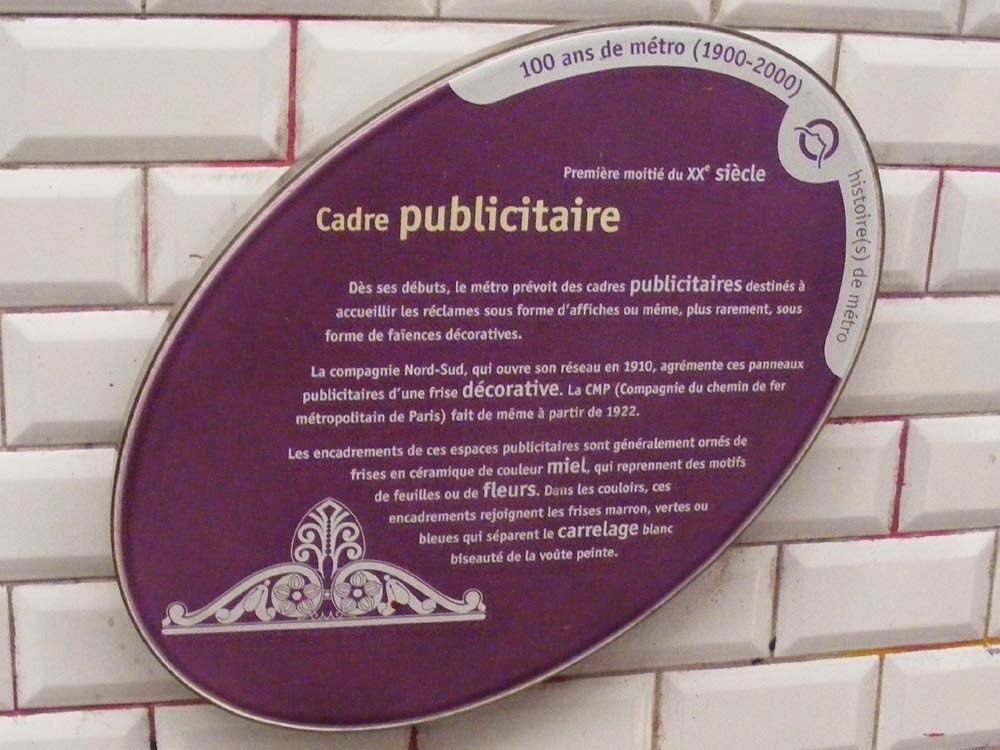 The purple plaque talks about the ceramic frames for adverts, which were made in the town of Gien especially for the Paris Métro, and its predecessors CMP and Nord-Sud. It also mentions the white tiles which many of the stations have on their walls. These are deeply faceted to try and disperse light from what was originally very dim lighting

There are purple heritage plaques at many of the metro stations, and we have blogged about them before (here, and here)

I have also made a little video of the journey between Bastille métro and Gare d'Austerlitz station on one of the new trains serving line 5. I cut out a little of the trip through the tunnel between Bastille and Quai de la Rapée, but it really does show how close the stations are to one another. The video isn't perfectly framed: it was filmed on the sly holding the camera at waist level so I don't have any real idea where I was pointing it. It should give you a decent idea of what metro travel is like if you have never done it.

Auchan was featuring different beef breeds yesterday, so I bought Charentaise shin, Limousin stewing steak and ribs and Parthenaise stewing steak. This last is a rare breed I'd never heard of, from Parthenay in Deux Sevres, to our west.
Posted by Simon at 09:00

I use currants in a mixed fruit cake, or marinated in tea for muffins, and eccles cakes should be 100% currants according to my memory and my 1969 Stork Cook Book. We haven't experienced much difficulty getting hold of them. Our current currants are "Sun" brand, I think from Intermarché or possibly Super U. Terre y fruits does them as do Biocoop where you can buy them loose by the paper sackful. Pauline

I'm more interested in those different breeds...
we saw some "Gurnzies or Jerseys" in the Brenne, near Martizay....
we thought at the time that they looked too large...
they must have been "Moos from Parthenay in the Ouest"...
very pretty cattle.
Now, cook it and tell us about the flavour!!

The shin [jarret] is my favourite for a long slow stew...
just melts in the mouth...
I think that jarret also makes the best burger meat...
I presume, in both cases, that all that connective tissue has a role there.

Simon, that decorative tile work is vunderbar!
And LaPeyre do the deeply-faceted, white tiles...
so you could do yourself a "Metro" wall somewhere...
there are edging tiles close enough on the market...
the only problem would be the corners and the centrepiece...
but you could do those in MDF... then white paint, followed by many coats of tinted varnish.
Do a bit of the kitchen wall and blackboard black the inside area and use it as a shopping list!

Really? I thought currants and raisins were difficult to get here. Perhaps I just didn't see them because I wasn't looking. I can't see the point of them when you can get sultanas which are way nicer than either. I know you can use currants but why would you?

They are indeed very attractive cattle.

We came very close to having them in the kitchen but finally decided against because they were more expensive and probably required more cleaning.

Having followed your linque....
they aren't that much larger than the Channel Islands cattle...

Or there are an awful lot of very tall Oirish and Francais showing them....
and the bulls, being way darker, look very muscular and, well, bullish....
when pictured on their own...
but then you see one with the handler looking down at it!!

I'm not sure that smoked chicken is really going to be the tiquet for supper.

If it's any consolation we are not having beef for dinner tonight either -- not even meat of any sort!

We are having the first eggs... hard-boiled... in mayo.
chooks are now up to one each a day...
we've got the EggRecipe books out!!
14 eggs a week... we normally use half-a-dozen!!
Thank goodness Vinnie turned out a Coco-skreeech-o...
he hasn't quite got the finish right!!
21 eggs a week???
And lots of prunes...

Oh, as an aside...
video working fine today...
straight in and up...
I'm wondering if our ISP caches to save traffic...
Virgin Media used to a lot when we were with them.

Hi, I just wanted to tell you that it is illegal to take photographs and videos in the Paris metro. You need special (very difficult to get) permission to do so. I don't imagine it really matters though.

My understanding is that it isn't illegal, although the Métro authority has a rule that photography is not permitted. In practice it is to a) stop people using flash and blinding the drivers, who need to see signals and what have you; and b) prevent the use of tripods, which block the passenger flow. Anyone using a point and shoot and not creating a nuisance will be left alone. Anyone who wants to do any professional shooting down there needs to get a permit. Likewise, publishing photos taken on the Métro is fine, so long as the photo does not significantly humiliate or degrade individuals. The few cases that have gone to court have been thrown out by the judge.