Here is a video Simon made of the Bouchon du Blanc (heritage traffic jam in Le Blanc). It was organised by the Teuf Teuf Club, and was very well attended and run. Everyone had to register prior to the event and send a cheque which covered snacks, lunch and drinks (€30 a head). Those of us participating in the scenic drive around the Brenne prior to lunch were told to turn up at the Parc d'Expositions in Le Blanc between 8.30 and 9.30 to get checked off the list and pick up an info pack with details of the route.


The soundtrack on the video is entirely 'natural'. The music you hear was coming from loudspeakers parked on the back of a vintage truck in the centre of town.

The group of around 100 cars was split into two and each half set off in opposite directions. The idea was to minimise traffic disruption on narrow rural roads by having a circuit which some people did clockwise and others did anti-clockwise. We went anti, out through le Blanc, Rosnay, past the Top Secret Submarine Communications Base, through Le Blizon, Le Maupas and Le Temple, ending up at the half way point, La Gabrière, where we parked up and enjoyed rillettes, terrine and boudin noir doled out from the back of two vintage trucks and washed down with wine. At this point a couple came up to us and introduced themselves. They were Chris and her husband, who live nearby and had come out to see the cars. They read the blog and recognised us!

Ensuite, reprendre les véhicules pour continuer cette ballade ! Then, back in the cars to continue the circuit!

Past the étang at Le Gabriau and through the lieu-dit Le Bouchet, where the Maison du Parc is situated, into Douadic then back to Le Blanc for lunch. It was a most scenic drive and our motorcycle outriders who were there to ensure no one got lost were thoroughly competant. 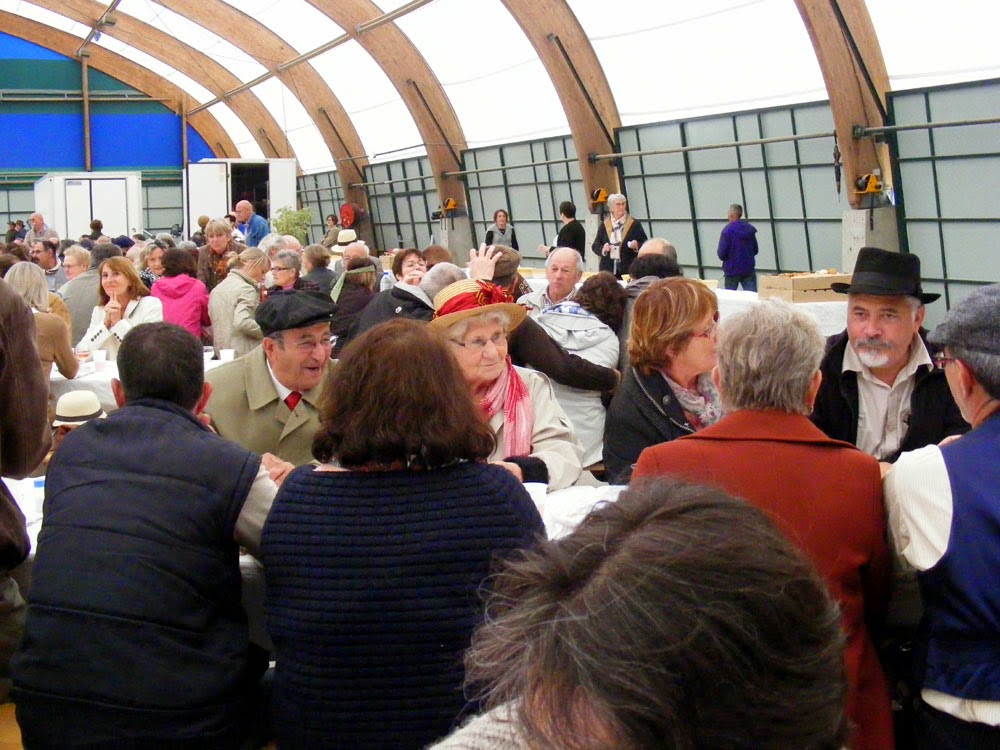 Lunch was a buffet of salads with charcuterie and chicken thighs, followed by cheese and green salad, then strawberry tart. Musicians were on hand to entertain with lively songs and half a dozen particularly impressive vehicles joined us in the hall. These included the vintage police and fire vehicles, still registered to the local gendarmerie, but living in the museum and in full working order. They were attended by enthusiasts dressed for their role. I didn't see a single real policeman for the whole day. All the traffic direction was managed by re-enactors. Charmingly, when the musicians played a popular dance tune, a couple from the table behind us spontaneously got up and danced. I love the way this happens at French gatherings. 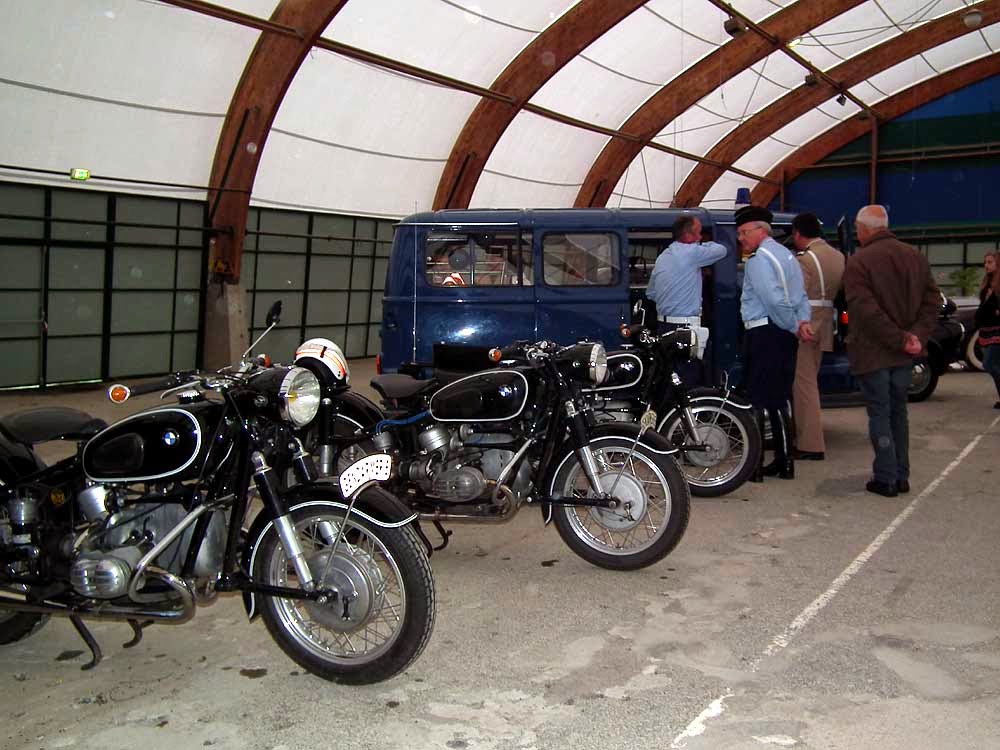 Once coffee was out of the way, the real business of the day commenced. The 'policemen' nipped off on their vintage motorbikes and vans to get into position in the middle of town. Then the rest of the participants followed, with numbers swelled to about 150 cars. We did a sort of figure of eight until there really was a traffic jam in town, just like the days when those travelling down from Paris to the Mediterranean met those travelling down from the mountains towards the Atlantic coast on the first day of the summer holidays in 1965. Very soon old vehicles (including Claudette) were over heating and pulled over on the side of the road with the bonnet up. Everything came to a halt, people abandoned their vehicles and went and had a beer. A huge crowd had gathered by this time, so the centre of Le Blanc was heaving. None of the photos give you a sense of how many people were there, but seriously, it was jam packed! The photos also don't give a good idea of how people dressed to match the era of their car. 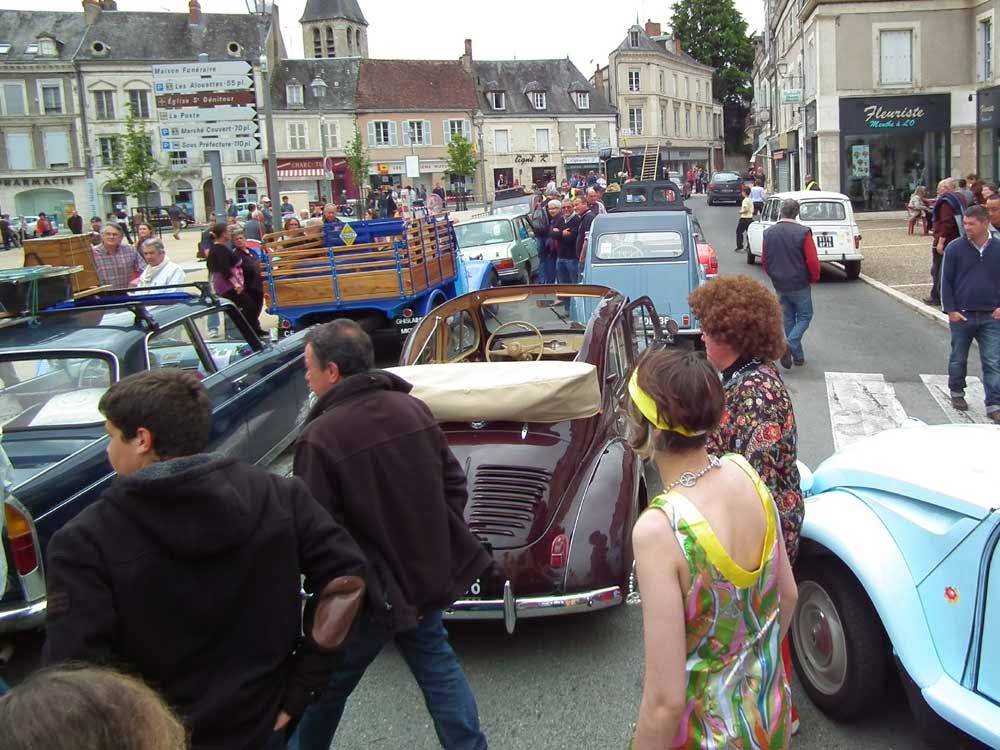 After an hour or so of extremely good natured traffic jamming, vehicles were asked to park normally, and more beer was consumed. Then around 5pm, it was broken up, with some people going home, others heading back to the Parc d'Exposition for a pot d'amitié (friendly drink). We thoroughly enjoyed ourselves and think the concept is brilliant. 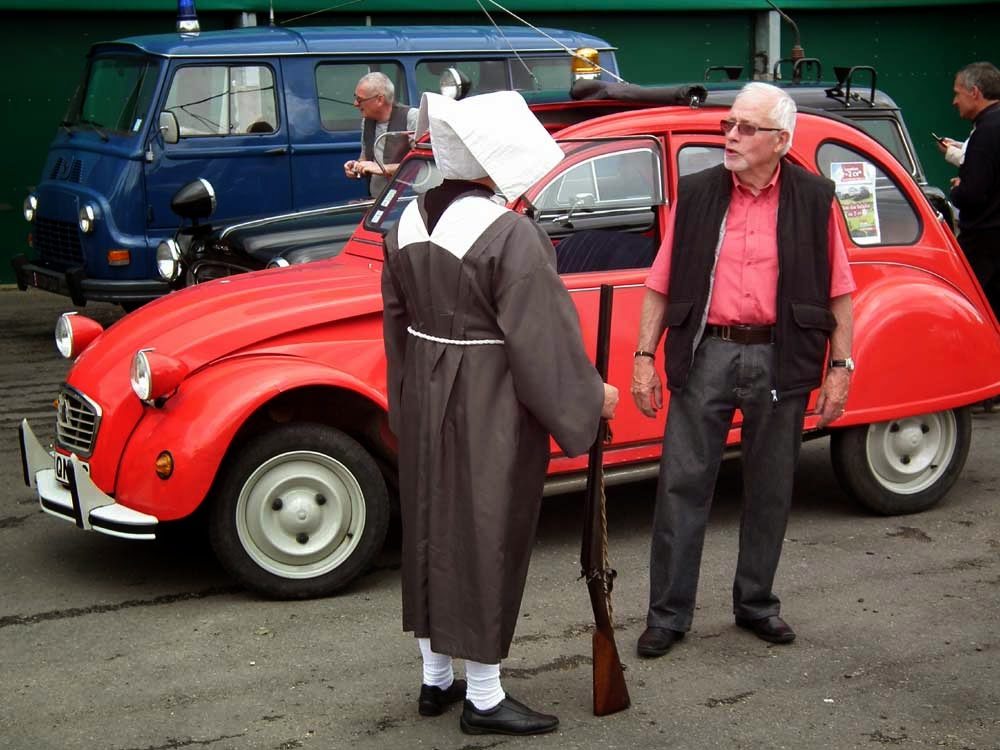 I think a Renault 750 might be a delightful cat to have.

What a coincidence. When I read this blog entry at noon today, we were parked in Le Blanc. I'm sorry to say there were no vintage cars in sight at that point.

We'd been at the Maison du Parc earlier in the morning. A long line of cars ambling along those quiet roads would be quite a sight.

Wonderful...
so sorry to have missed it...
great vid Simon...
some lovely tin on show and some real Characters playing their part.
That Chabron DS convertible doesn't get my vote though....
there is something "wrong" with the DS line in those conversions.
I don't think that Gytha was missed...
there were enough 2CVs there!!

And here I was thinking I was going to see Simon in action!

It was a lovely sight to see in La Gabriere, & even better, to meet up with you both, hopefully we will meet up again in another interesting place too.