Part I is here.

'Associated with the Loire, the ancient architectural heritage is a constituent element of the Touraine (Loire Valley) identity. It merits particular attention in its treatment, and that of its surrounds, both built and vegetative.' 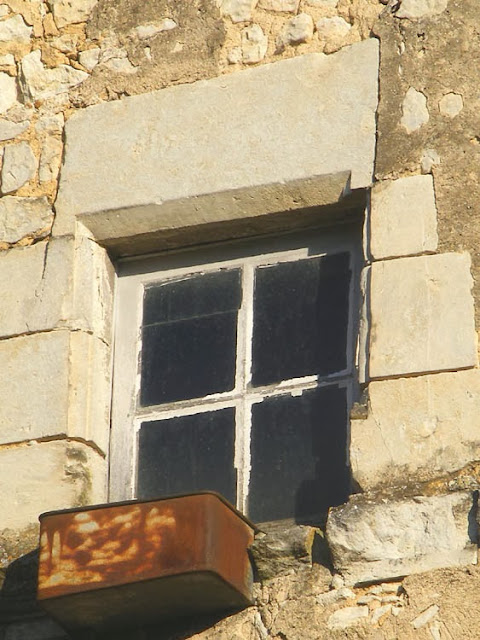 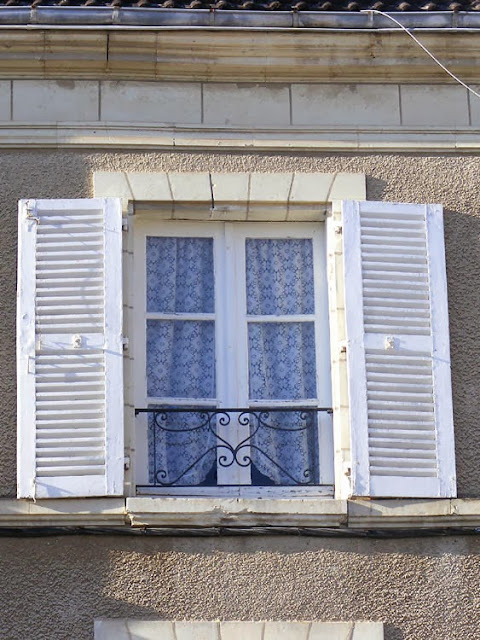 Une lucarne engagée dans le mur.
A wall dormer (set so that the front continues the plane of the wall and the bottom breaks the line of the cornice). This one is hip-roofed. 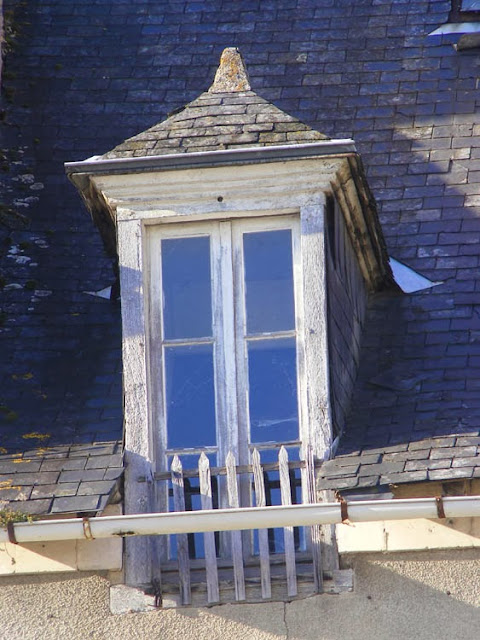 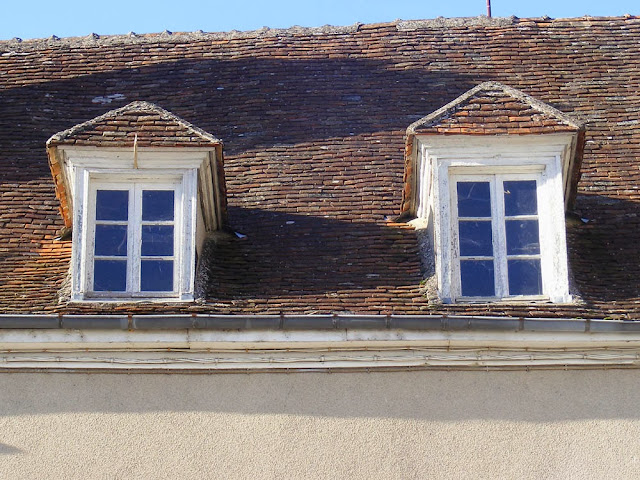 Les montants.
Jambs (the frame that holds the window or door). 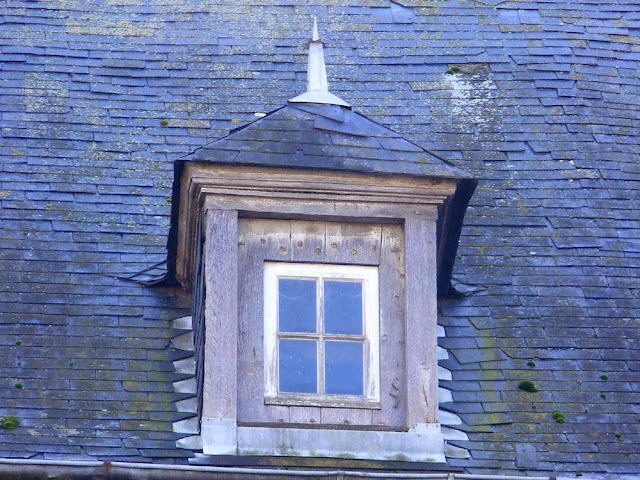 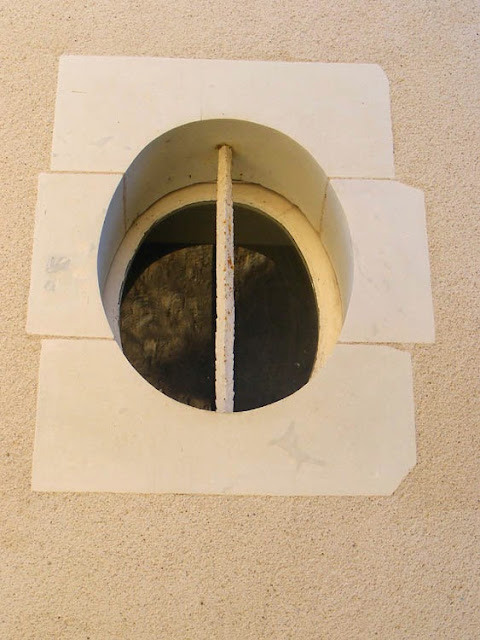 Very interesting series, Susan. I had no idea window dimensions were at all standardized here. To my untrained eye, they seem to be all over the map in size.

Unless *persiennés with an accent is some technical term that I don't know, the louvered shutters are just called persiennes, sans accent. They can be in wood or in metal (like ours).

Ken: The reality is they are all different dimensions. The above dimensions are a 'counsel of perfection', if you like. One of the things I really picked up on when going around town to take the photos is how many non-standard windows there are.

The booklet definitely says persiennés -- several times, so it's not a misprint. But like you, I was under the impression these shutters were persiennes, sans accent. According to the booklet they come in persiennés and semi-persiennés and are very much a feature of maisons de bourg. Maisons rurales have plain shutters with little motifs cut out for ventilation.
Wooden shutters are preferable, metal ones are sniffed at by the heritage fraternity.

No, "persienné" is not a technical term, it is just the past participle of the verb "persienner", which means make something look like a persienne or be fitted with one. Consequently, it cannot be used by itself as a noun. You would say a "volet persienné" a shutter made looking like a "persienne." Or, a "fenêtre persiennée", a window fitted with "persiennes." The plural would be "persiennés and persiennées", depending on the gender of what is persienné.

Those "lucarnes" in 3, 4 and 5 are also called "chien-assis" or sitting dogs. The oculus is called "œil-de-bœuf" or bull's eye. Note the hyphens.

chm: thanks for the clarification of persienner.

The lucarnes are not strictly speaking chien-assis although a lot of people refer to them as such. Chien-assis are a very particular type of lucarne not seen very often. I know this because my friend Rosemary did a post on the subject a while ago, using illustrations from the Dicobati.

An oculus is also often called an oeil-de-boeuf in English, or an ox-eye window. (Bull's eye in English means 'target'.)

Ken: no, me either. BTW, I measured our windows, which do not conform at all to the above measurements. Our bedroom window is much too big and to my surprise our kitchen and spare bedroom windows, which are one above the other, are different sizes. I'd never noticed before, but now I realise the panes of glass are differently proportioned, so although they have the same number of panes, it should have been obvious they were a different size.

Strange. This morning I found on the Net the verb "persienner" which obviously never existed. (I should have saved the link.) This afternoon, no way I could find it again.

Probably, people who sell "persiennes" made up a "néologisme", creating an "adjectif qualificatif" from a supposed past participle of a new verb. I still think, one of these days, there will be a verb meaning, as I said before, fit a window, or any kind of aperture, with persiennes or something similar. C'est l'évolution du langage! LOL.

Just looked at the chien-assis link. Wow, I had no idea there were so many different kinds of "lucarnes", each with a special name! LOL

That dictionary must be a mine.

When we made a recent planning application, which required Batiment de France architect's approval it was stipulated that our windows had to conform to the ratio of 1.4 to 1 as regards height to width.

Interestingly if we were to have grey paintwork it had to be 'gris moyen casse de bleu'.

Sorry cannot get the comments to accept any accents

And there of course is a typo, in my last comment... comme d'hab.

John: Interesting. The ratio of the measurements above is more like 1.5:1. The most important thing is that windows should be higher than they are wide. Wider than high is very much frowned on. My understanding of the colours allowed is that it is dependent on the age of the building, with darker colours being approved for older buildings, lighter for 19thC and younger.

Rosemary: thanks for consulting the Dicobat and clarifying.

It needs saying that there is a very good reason to have windows rather taller than wide; and it is not just a matter of looks. Quite simply if the casement is wider than high the forces acting on the joints are higher and the outer edge will drop in time; the lower outer corner will catch and gradually as it is opened and closed everything including the puttying of the glazing will loosen up. Some French window joinery is, shall we say, fragile. That the shallow putty bead often employed should stay in place consequently owes more to faith and hope than sound practice.

Perhaps making comparisons between what one admires and deplores in someone else's country is the stuff of expatriate living!

John: speaking from personal experience, it seems that lintels are not a requirement but that faith in 2 mm thick glass to perform structurally is.