The Touraine Goose is one of the historic products of this region, like the Géline. In the past it was abundant in the Touraine, grown for its meat and the trade in feathers and down for making mattresses and pillows.

The Touraine Goose has similar origins to the other white geese breeds from central France, but had nearly disappeared in recent times. Thanks to the determination of an enthusiast from the Loches area, it has been rediscovered and relaunched in 1990.


A Touraine gander, waiting for an opportunity to peck his neighbour. 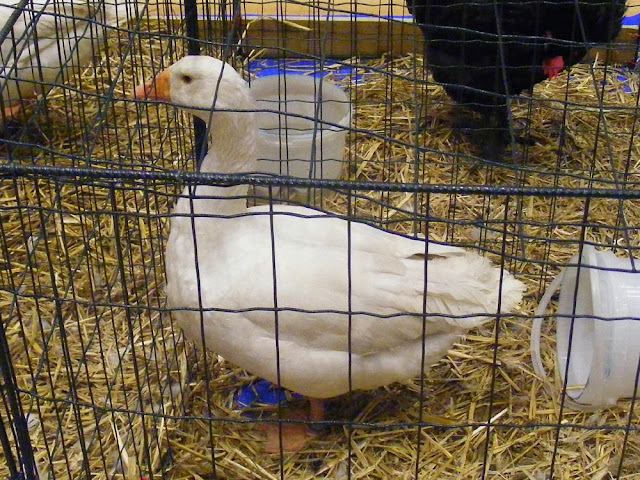 It is associated with a number of traditional feasts:

The Grape Harvest Goose (l'Oie des vendanges) -- thanks to its rapid growth rate and relatively small size the Touraine Goose is ready to be roasted by the end of the grape harvest.

Alternatively, you could fatten the goose for a bit longer and have it for St Nicolas's Day (6 December,  when gifts were given to children). Nowadays, this tradition has morphed into the Christmas festivities, and the goose has been supplanted by the turkey.

Tim: Thanks, that sort of info is really useful.

As well as the meat and the feathers, there are numerous traditional uses for goose grease, culinary or otherwise. According to the Goosefat Information Service (!), "To remedy ‘colds on the chest’ goose fat was smeared onto brown paper and applied to the chest or back as a poultice." P.

Mew, mew...
And I've just posted about the above tried and tested use of goosefat on "It's a Cat's Life"
Miaou!!

Mother, helping out at a post war clinic, saw a child who had been smeared with goose fat and wrapped in brown paper for the winter... and no, I have no idea what the insanitary arrangementes were....

Fly: Wow! Not to mention LOL!

funny as religion shifts, so does food habit.