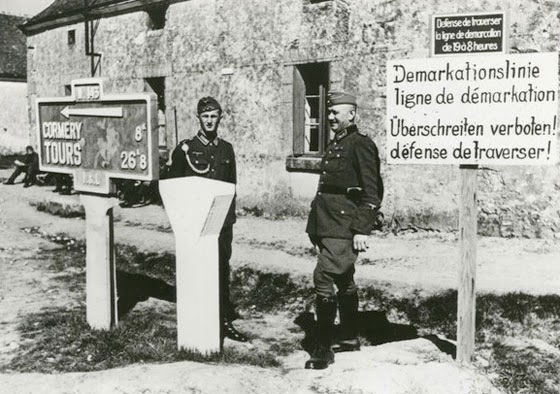 Simon came across this photo and wondered were it was. He couldn't immediately place it, but by a process of elimination, using the distances shown on the sign post as clues, he worked out which were the possible roads. One day, barrelling along the D943 he realised we were passing a very likely contender. Once at home it was on to StreetView to compare the images, and sure enough, this house is the same in both photos.

Curiously, it looks both older and more gentrified in the modern view. It is situated on the intersection at the lieu dit mysteriously known as Café Brûlé (='burnt coffee'). The photo shows the only check point along the World War II Demarcation Line in the commune of Reignac sur Indre, so the only place you could cross from one zone to the other in the area in the days when France was divided between Occupied and 'Free' (Vichy).

You still have to take care as you cross at this point, as the speed limit drops to 70 kmph and there is a speed camera (....ahem....as some of us know to our cost).

Egg Fried Rice, like this, but with carrots, celery, sweet corn and mushrooms, and no 5 spice.

Email ThisBlogThis!Share to TwitterShare to FacebookShare to Pinterest
Labels: Loches and area, The Car and Driving

Ah, that speed camera. I know it well...

The recipe for egg fried rice that you link to never says how you are supposed to combine the rice and the eggs. Something is left out.

I've learned from a French cook that you should never salt the water that rice is cooked it. Salt causes the grains to break. Same with potatoes — no salt in the cooking liquid works better.

For fried rice, Elise at Simply Recipes explains that to make good fried rice, you need to cook the rice and then spread it out in a wide shallow bowl or pan and let the grains dry for 30 to 60 minutes before you make the fried rice. The texture is better that way.

Ken: Ah...can you tell I didn't actually use this recipe then... You add the beaten egg at the end -- pour it in, stirring all the while. It takes seconds to cook. I always cook and spread rice out to dry for fried rice, usually in an open gratin dish in the fridge overnight.

Ian: Aha, so you've been caught too!

Great detective work finding the spot where the WW II photo was taken. I really enjoy your "Then and Now" photos. Thanks!

Streetview is fascinating, isn't it, for checking against old photographs.

Oh yes that speed camera .... once and now never forgotten!