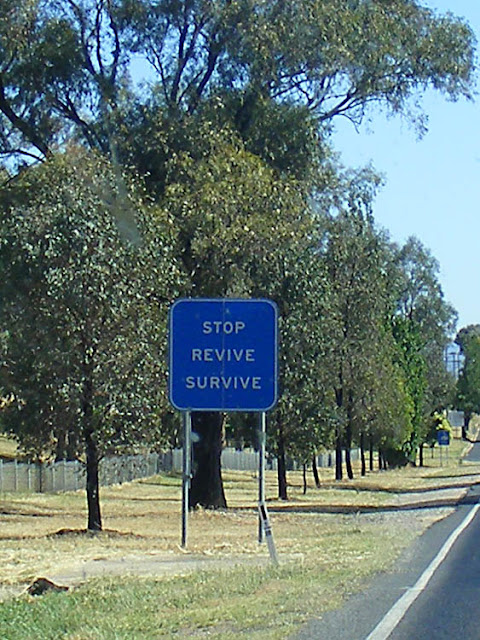 The distance between my sister's house and our parent's house is about 1100km. In late November 2012 we drove from Canberra, where my sister lives, to my parents place near Toowoomba, spent a week with them and drove back again. It is possible to do the journey in a single day. Both Simon and I have done it in the past, when we were young and invincible. We considered doing the return journey in a single day this time, but my sister and brother-in-law told us they thought it was extremely dangerous, so we opted to overnight half way on both journeys.

Driver fatigue is a big problem in Australia. Around 20% of fatal road accidents in Australia involve driver fatigue. Distances are great and people get white line fever and forget to stop, or they are on a tight schedule and focus on meeting it. Doing the trip over two days meant we could stop frequently, go to the toilet, have a drink or a meal, a walk around, a bit of shopping, take some photos -- all getting the body and brain moving and refreshed for the next few hundred kilometres.

In Australia, one of the problems until very recently was that there wasn't anywhere nice to stop if you were travelling inland, except in the towns. There are rarely service stations between the towns and you often can't pull off the side of inland roads because they are built on flood levees with big drops either side and no hard shoulder. In France there is an extensive network of aires (laybys) usually with a picnic table, shade and often a toilet. Australia has been relatively slow to develop pleasant places to stop like this, although they are much more numerous than when we left 15 years ago. The problem of driver fatigue has been recognised for longer though, and there are several famous 'driver reviver' stations, manned by volunteers who dole out cups of tea and a friendly chat to those who stop.

In both France and Australia driver fatigue amongst long distance truck drivers is the greatest concern. Drivers are educated, hours of work are regulated, but it is a complex subject and simplistic regulation of continuous work hours does not take into account the age of the driver, whether they are driving at night, whether they ate on their last break, and how much and many other subtle factors. It's fertile ground for ongoing research!

*******************************************************
Chapel News: Another meeting with another architect yesterday. Now we have to make a decision which one we want to work with and who will fit in best with the project team. This will not be an easy decision, as only Bernard has met all three prospective architects. I've met two, Gérard has met two and the Dominiques have met one each. Apparently there is some 'politics' that need to be delicately dealt with in terms of the choice we make too. Bernard has looked at all our photos and given us a list of what is required and for whom (grant giving bodies with different focuses and our fundraising flyer). Some need pretty, evoquative pictures, others require technical images of architectural features and problems.

"Bernard has looked at all our photos and given us a list of what is required and for whom (grant giving bodies with different focuses and our fundraising flyer)"
Bernard seems wonderfully, politically as-toot...
and DTP allows you to supply targeted information on a limited budget...
it must make funding choices for different bodies both much harder and somewhat easier as "flyers" for different projects come in with lots of the correct info...
but I pity the worthwhile projects that need to be funded...
that cannot call upon such expertise.
In prioritising the funding, the poorly presented projects will almost always slide down the list...
but probably not as far as the ones where they think...
"They're 'avin' a laff!"

Tim: For someone who isn't a 'heritage professional' but rather an experienced amateur, Bernard is really switched on. Grant application writing is a real art form these days. Big heritage organisations usually employ a professional who specialises in this area.

I checked the link to Cauliflower Creamy Sauce and it sounds very good with rice. I'll try it soon.

Like you we aren't able to do such long journeys in one go. Twenty years ago we would travel the 800 miles to the Alps, with only toilet stops, by sharing the driving. Nowadays we struggle with the 600 miles to LP-P and usually do an overnight somewhere near Calais or with friends at Maidstone.

I love risotto but rarely make it.

I can remember doing Townsville-Toowoomba with a friend just before I left Australia. It's about 1600 km. We changed drivers every 3 hours. Next day, we continued on to Armidale. Now it seems impossible! It's true that in France, there are a lot more places to stop on route. Now we stop at least every two hours if travelling long distances.

Leo drove non stop from Malaga to the Black Forest in winter in 23 hours....and wondered about certifying himself for lunacy.

The fund raising industry infuriates me....to have to hire specialist form fillers and presentation merchants - as most local authorities do now - in order to attract a grant is just so much money wasted which could be spent on the project.

Fly: This sounds like the story I heard the other day of the Monty Python team driving from Munich to Venice and back in little more than 24 hours.

The alternative to not employing a professional is that no one fills out the forms and deserving organisations don't get money that is available because no one can be bothered to fill out the forms. Then they whinge about how everyone else but them gets grants. It's a subject not to get Simon started on.