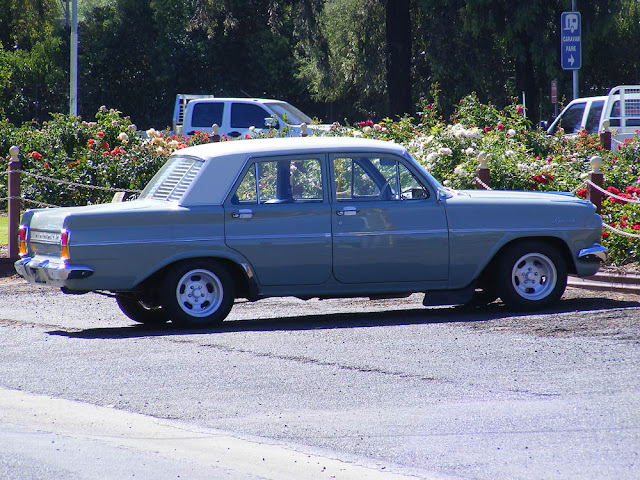 Allow me to introduce you to the Holden EH Premier, the top of the range in Australia from 1963 to 1965. This one was photographed outside the tourist office in Cowra, New South Wales in December 2012.


The EH was a step up in quality and technology, incorporating new styling and a new motor, known as the 'Red' motor, that was more powerful, economical and smoother than its predecessor, the 'Grey' motor. Exhaustively tested prior to release, the EH proved to be one of the most reliable and easy to maintain Holdens of all. It was essentially a clever reworking of the already popular EJ model, which was Holden's answer to the Ford Falcon. My sister's first car was an EJ, known as the Blue Beautron amongst family and friends, and by that time nearly 20 years old.

An estate version of this car took me and the people I was staying with round Kenya and Uganda in 1968...

Tareversuch for bringing back memories...
and reminding me that I really must scan those slides!!

I love the sun shade in the rear window. Tim says it was an optional extra on the Ford Cortina in the UK at about the same time. P

Tim: A station waggon version, to be strictly accurate :-) You must indeed scan the slides. My Dad has been happily engaged with doing his for a couple of years now.

PG: The sunshade only came on the top of the range model I seem to remember. It's a great touch, isn't it!

The same sunshade design and option was available on the Ford Cortinas of the same period...
I forgot to remark what a superb example of a 50 year old model!!

Tim: It was in spectacularly good condition. I photographed it because it was so impressive. I suspect it might be a fairly well known car. (I think I'm not the only person to photograph it and post it on the internet.)