Earlier this year Simon suggested that it might be a nice idea to get all the Touraine bloggers we could find together for a Christmas party. We contacted everyone we knew of and suggested a couple of restaurants that would hopefully be central and suit everyone's tastes. 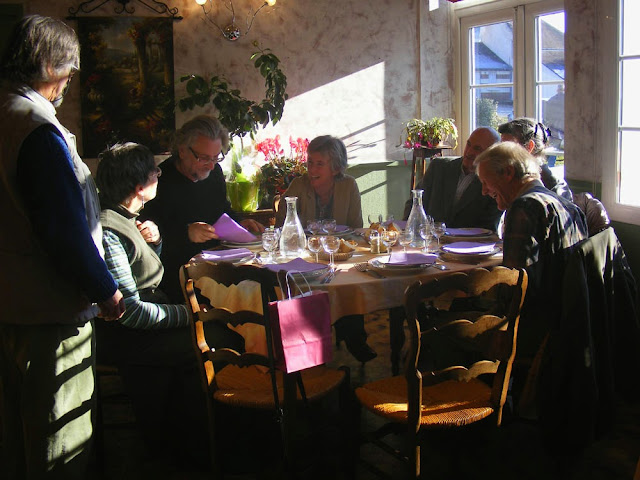 The big challenge was finding a date. The Touraine bloggers are almost all expats and many of them head off to other countries for the winter holiday period to visit family. Many of them don't even live in the Touraine at all, but are devoted to the area nonetheless. 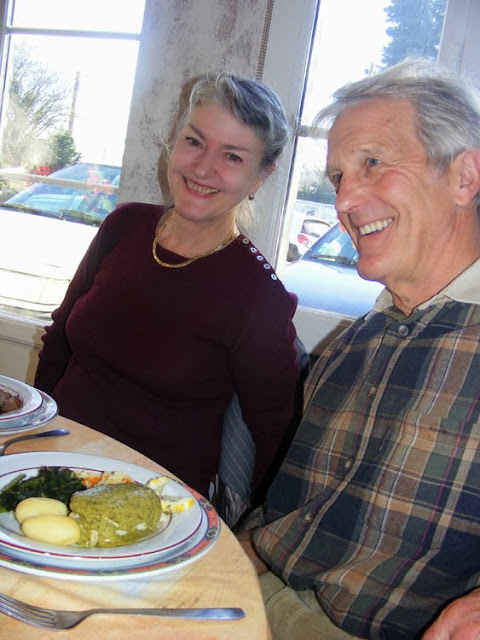 Finally we settled on Wednesday 11 December and the Hôtel de la Gare in Montrichard. This is a restaurant we use often with clients and they do a traditional lunchtime meal that is completely unpretentious and totally good value. The starter is a buffet of cured meats, fish and salads, all made in house except for some of the charcuterie, which comes from a local artisan. There is a choice of three mains, and on the day we were offered roast veal, roast leg of lamb or cod, all with seasonal vegetables such as braised endive and flageolets (dried green beans) plus fried diced potato. Then a cheese and dessert trolley is wheeled up to the table for everyone to serve themselves. Desserts are the popular old-fashioned type -- crême caramel, chocolate mousse, îles flottantes, fruit salad and so on. The hotel has just changed hands, so when we return in the new year the new owners will be installed. We hope they can provide the same welcoming and authentic experience that Mireille and Bernard, Sébastien and Severine have always offered our clients.


Jean Michel patiently works his way through about a dozen layers of wrapping to get to his present. 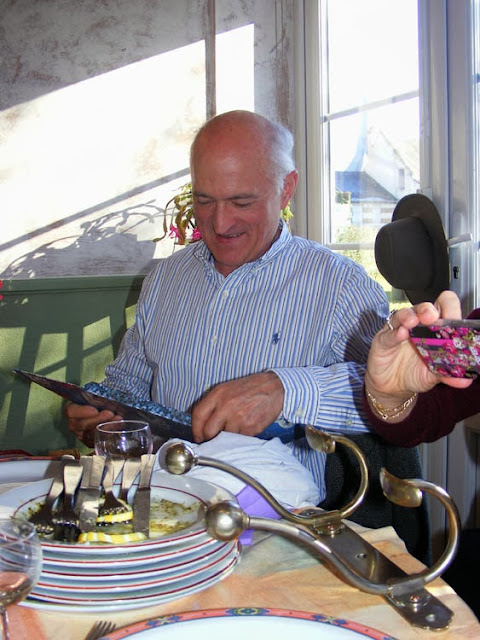 Four blogging couples were able to make it to the lunch -- Tim and Pauline, who write Aigronne Valley Wildlife and De la Bonne Bouffe; Kath and Roger, who write Our French Adventure; and Jean Michel and Rosemary, who write Aussie in France and Blois Daily Photo; plus us of course. We had organised a Secret Santa so that gifts were exchanged, sometimes between people who hadn't previously met. If you haven't encountered a Secret Santa before, everyone receives a name randomly and they must buy or make a present for that person. There is generally a low spending limit so everyone gets a present but no one feels pressured into spending more than they can afford. 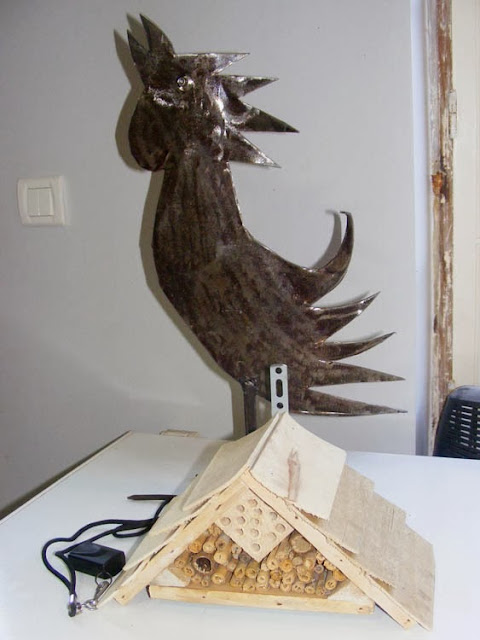 Personally, we were super impressed by how much effort everyone put into getting just the right present for their random receiver. We were thrilled with the gifts we got -- Roger made a recycled metal rooster for Simon and Kath made a bee hotel for me. Tim also very kindly gave me an illuminated loupe as a thank you gift.

Everyone got on famously and I think there might be one next year, organised by Leon (Melbourne - Our Home on the Bay).

'Twas a good do, 'twas...
thanks.
And thanks, Simon, for the 2CV Fève...
and the tasty way it was delivered!!
[Mental note... MUST NEVER EVER visit the patisserie in Genillé!!].

The food was excellent... and the restaurant was obviously very popular...
I particularly liked the cold table...
I am glad you warned me ahead of time...
I made sure I didn't have any breakfast!!

I see your loupe now has a loop!!

Looks like we missed a treat! I love a secret Santa. We do them at school every year. Depending how well the giver knows the recipient the presents range from recycling an unwanted pressie through a choice oif something safe and nice, to those presents where the giver has captured the essence of a facet of your life and embellished it.

We hope to be in a position to join in with the next one.

Actually, Jean, Colin, Elizabeth and I held a rival lunch the previous day neat Knutsford, in Cheshire. I'm sure a blog post will appear somewhere, someday! Nick and Tim were both working...

There was an astonishing number of cars and vans parked outside when we arrived. The new proprietors will have a lot to live up to! Best of luck to both old and new.

Gaynor, if Tim visits rhe patisserie in Genillé, he's likely to walk out with the entire pastry counter. That would be very bad for him, not to mention leaving none for me.

Looks like a good time was had by all. Sorry I had to miss it, but my consolation is seeing our three grandbabies (in the US).

We loved seeing Susan and Simon again, were delighted to meet Pauline & Time and Kath & Roger, had a great meal and enjoyed the Secret Santa. Next time we have a party, no one will get their glasses mixed up (especially me!). Gaynor, we don't have to wait for next Christmas. We could have a Mardi Gras party on March 4th and eat pancakes, for instance. I'm not suggesting Easter because I know we won't be here until we celebrate early ...

And I nearly forgot, my favourite present (which Susan appropriately received) was the bee hotel made by Kath. Makes you want to be a bee.

It's a shame we couldn't bee there! Especially as it was my birthday! It looks like you had a great time and I love secret Santas.

I like the light in the first photo. If it were treated with some kind of filter (Photoshop or other) it could look like a 17th century masterpiece!

I love the metal rooster and the bee hotel. Very clever and cute

Love that bee hotel :-) What a great prezzie to get.

Very sorry to have also missed this lunch and apologies for being so late to catch up with the event.

Jim: Indeed. I would have liked to have caught up with you and Carole, but maybe next year.