Botany of a Limestone Ridge

As promised back in the early summer, here are some more photos from a wonderful botany outing to a limestone ridge near Panzoult.


A wee plant of the rare and protected Annual Woundwort Stachys annua is surrounded by botanists before it can make a run for it. 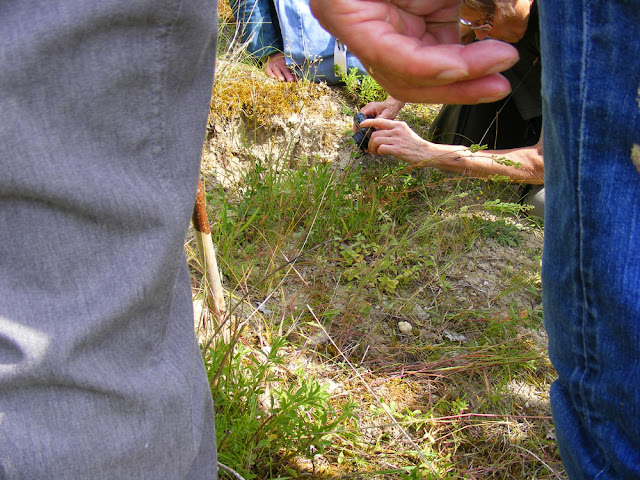 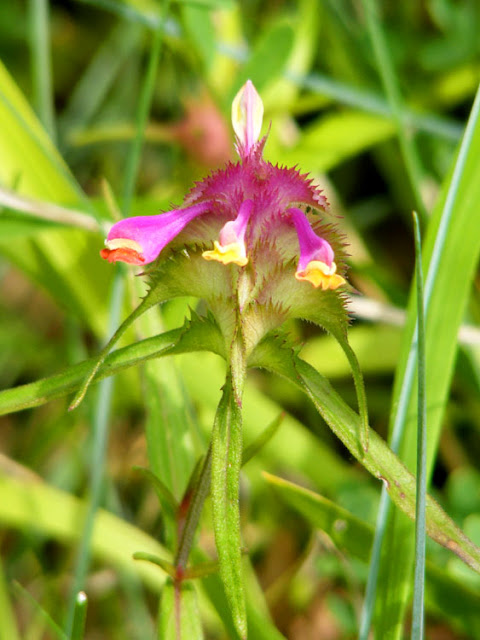 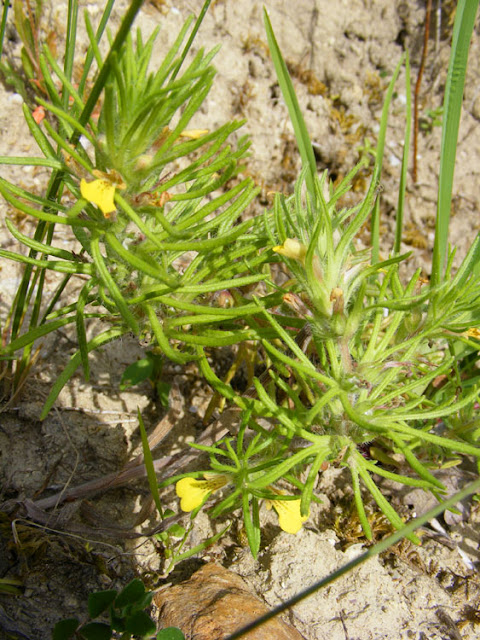 Peach-leafed Bellflower Campanula persicifolia, rare and protected in the wild although widely planted in gardens. 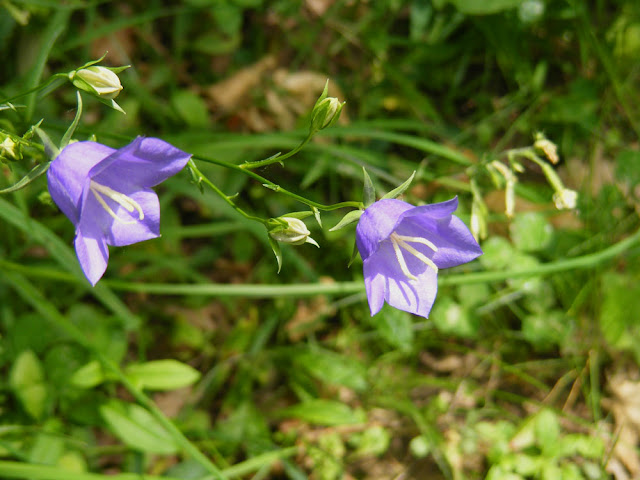 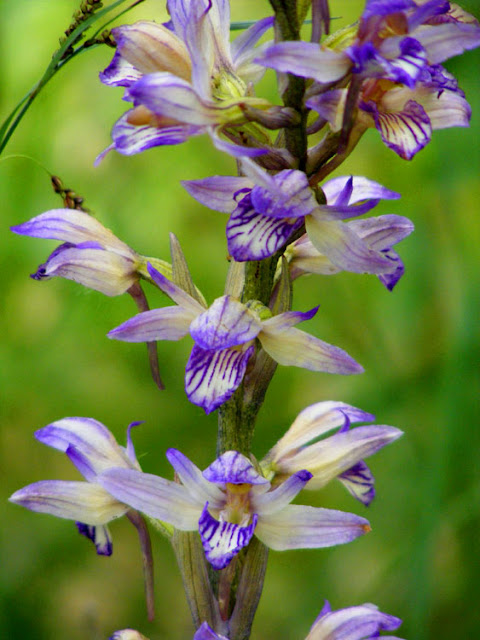 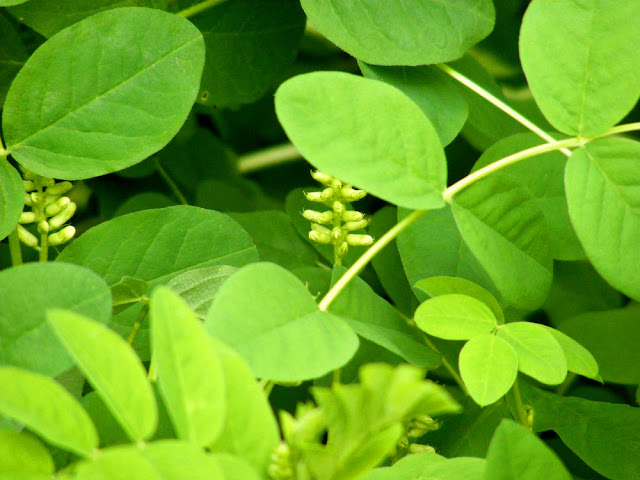 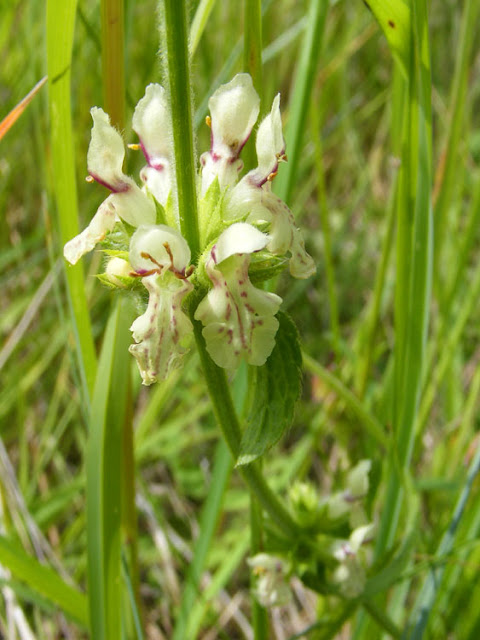 Simon's parent's very kindly gave me some money which Simon used to take me to lunch. We went to Le Petit Tonneau in Montlouis sur Loire, where we had a very nice meal in a friendly atmosphere. All the staff, including the chef and the owner appear to be women. I managed to entertain our waitress by asking for a glass of Vouvray. On est à Montlouis alors...oops. I sheepishly changed my order and we all had a laugh. The salads on the buffet starter were so fresh they were nearly luminous the colours were so bright. I had steak with shallot sauce and chips made in-house. Simon had chicken. My steak, which was not an expensive cut, was done to perfection. It's always a good test of a restaurant to have steak, especially in France. It's one of those dishes that seems easy, but is often not up to par. Desserts were also maison, and I had chocolate pear tart, Simon had apple and raspberry crumble tart. Both were excellent.
Posted by Susan at 09:00

Happy Birthday. I agree with you about cooking steak. In England it is pretty bad, very few can cook it how I like it just browned on the outside. C

Many belated "Hippos Returning"...
lovely post... that Limadore in FULL flower is a wonder to behold... and the others are pretty exciting, too!

Your e-reader is going to be a travel and Hippoday boon... since my bro got his Kindle, I don't really have to think...
just send another Amazon token by email... cheaper on postage, too!!

Thank you, Susan. I remember asking for more photos. Every
one a beauty. And Happy Birthday!

I would suggest Balzac, since some of his books have a Loire Valley background.
As you know, he was a frequent visitor to Saché, where he wrote some of his works. You can download, for free, quite a number of his books on ebooksgratuits.com

The navigation is not obvious. You have to click on Ebooks at the top of the page and then a box appears where you can ask for what you want. If you want the list of ALL the books available in alphabetical order, you just don't write anything in that box and only click Rechercher. Et voilà!

Ebooksgratuits.com gives you links to other sites where you can download books from. The Gutenberg Project is good too.

If that can be of any help, in my iPad tablets I have to use ePub for downloading. I am very happy with this site.

Colin: I can recommend le Petit Tonneau to you in that case.

Tim: When it suits them Violet Limadores are really impressive, aren't they.

Sheila: no probs and thank you.

Dean: I'll take a look at them, thank you.

I think it's a good idea to start by reading 20th or 21st century books. Françoise Sagan is an example. Balzac can be heavy going, since he describes every little detail using terms that are nearly obsolete now. Read Albert Camus -- L'Etranger, a novel, or essays like L'Envers et l'endroit. I think it's easier to start with more abstract works rather tha ones where the profusion of detailed terminology blinds you to the subject and story at hand. For something very current and entertaining, try novels by Marc Lévy, or French translations of Douglas Kennedy's novels (Kennedy is very popular in France).

Ken: good thoughts. I've read Sagan and Camus before in French, a long time ago. It would be good to read them again and see how different I find them. One of the things I would like to get from reading is modern dialogue, so your point is very valid. I've never heard of Douglas Kennedy, btw. I'll look him up.

Happy Birthday, I am sure you will have many times when the kindle will be just the thing to have with you, so small and light.
I hope we can catch up while you are back next year, Hil is now retired too, so her days are now free.

Have you got round to Proust yet? He has a wonderfully forensic eye, which might appeal to your botanist sensibility - except his is trained on people rather than plants:) High society people in particular, but then you are fascinated by rare 'high society' plants, so you can probably appreciate that.

Margaret: I hope we can all get together at some stage when I'm there.

Emile: No, I've avoided him a bit. I find the whole madeleine thing rather off-putting. I've never met a madeleine I really liked, and scents rarely have any discernable Proustian effect on me. I should get over it and try him, you are right.

Lucie and RiF: Many thanks.

Oh very happy belated birthday! Sounds like you had a great meal :-). Well cooked steak is a very valuable find.

We'd wondered why you had come to raid yet; what a perfect present--much better. Niall's sister swears by her Kindle.

HD: I looked him up. He has quite a reputation!