Fungi Foray in the Forest of Preuilly

On Sunday 27 October the Association de Botanique et de Mycologie de Saint Maure de Touraine held an outing to the Forest of Preuilly. The weather that morning was ghastly as we were hit by the tail end of Hurricane Jude. Nevertheless, with the calming of the wind and rain that afternoon about 30 people turned up for the outing. About half were regulars, being club members, the rest those who were primarily interested in picking mushrooms for the table and having the reassurance that a) there wouldn't be a wild boar hunt going on and b) there would be experts on hand to identify what they had picked.


A group just about to head off into the forest. 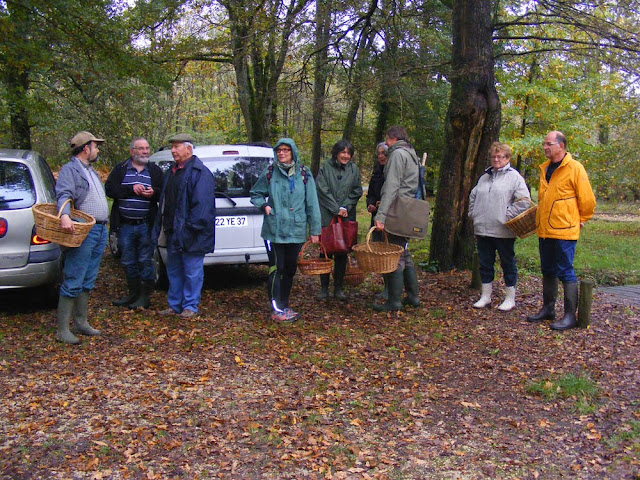 I chose to go with Jean Pelle, who lives nearby and knows the forest well. He suddenly dived off piste into these hornbeam woods. 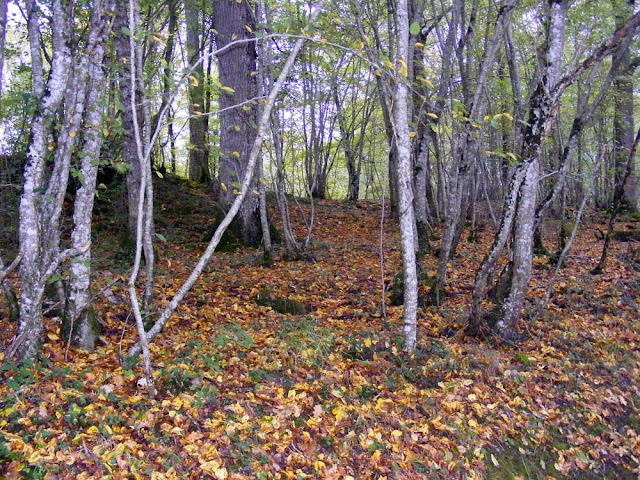 I suspect these were the reason. 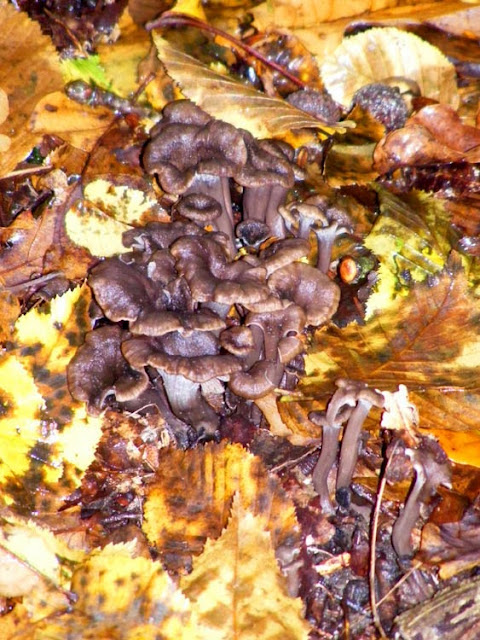 They are the fabled trompettes de la morte Craterellus cornucopiodes. Jean obviously knew they were there and my companions picked a nice meal's worth. Despite their grim sounding name, they are one of the most prized edible mushrooms in the forest, and I often see them in the market during autumn. They can't be commercially grown, so are always wild harvested. According to one of the men in my group, there are two theories about how they got their name. One is that they are black, a colour associated with death, the other is that they emerge around All Saints Eve. Several people were very envious of our haul and said they hadn't found trompettes de la morte for years. 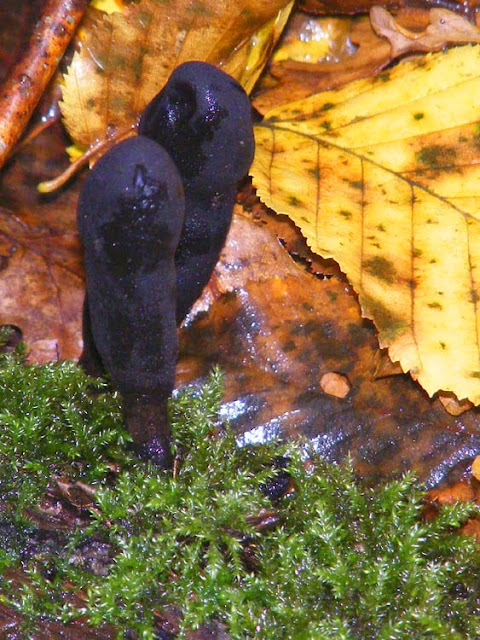 In any event, their name is not the dire warning you would expect it to be, and they are not as black as one of the club fungi we found, called Dead Moll's Fingers Xylaria longipes (or Pénis de bois in French). Both this species and the Giant Club Fungus Clavariadelphus pistillaris (la Clavaire en pilon) caused some interest, as they are not overly common.

Jean called these Marasme de bois, but I never picked up what their scientific name is, and I can't find anything under their French name. They are Marasmiaceae though, so related to shitake. UPDATE: Jean tells me they are Laccaria spp (Hydnangiaceae). 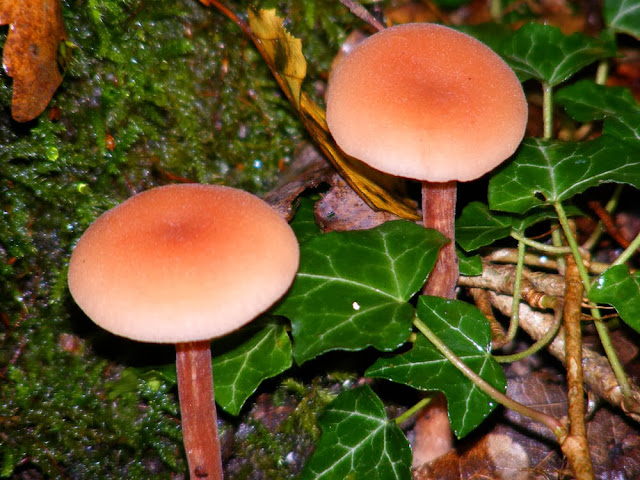 This is a dog lichen Peltigera cf polydactyla, so only half a fungus (dog lichens are a symbiotic arrangement between an algae and/or a cyanobacteria and a fungus). 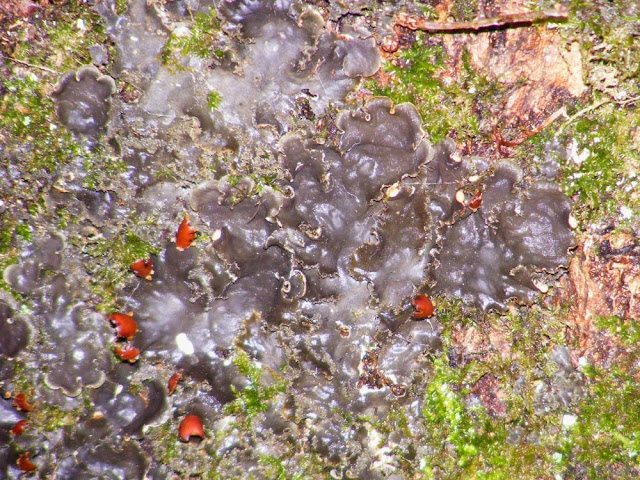 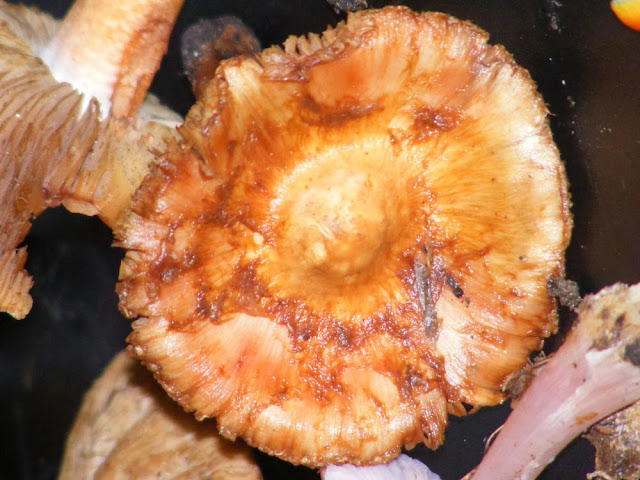 This specimen of Pear Fibrecap Inocybe pyriodora got handed round for everyone to smell, as this is the main way of identifying the species. It smelled like not terribly good pear eau de vie. 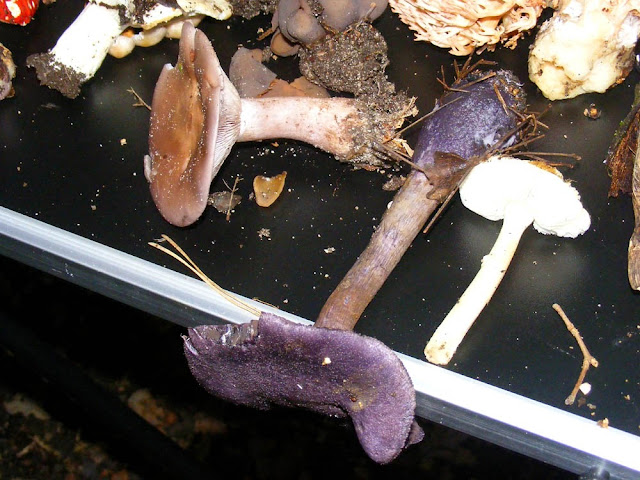 Wood Blewit Clitocybe nuda (syn. Lepista nuda, le Pied bleu in French) is a popular edible mushroom, but it has several dangerous lookalikes, especially amongst the violet coloured Cortinarius spp, such as this C. purpurescens. The webcaps used to be considered edible and you could buy them in the markets until it was discovered that they poison by accumulation. There was quite a lively discussion about the pied bleu, as a number of people had clearly been eating the wrong species for a long time. The Wood Blewit, as its English name suggests, grows in woodland, and is an autumn species. Fortunately, those people who have been eating a spring mushroom that grows in fields all these years have been eating a lookalike that is not dangerous.


I've been told how to cook these and survive, but I won't be putting the theory into practice. 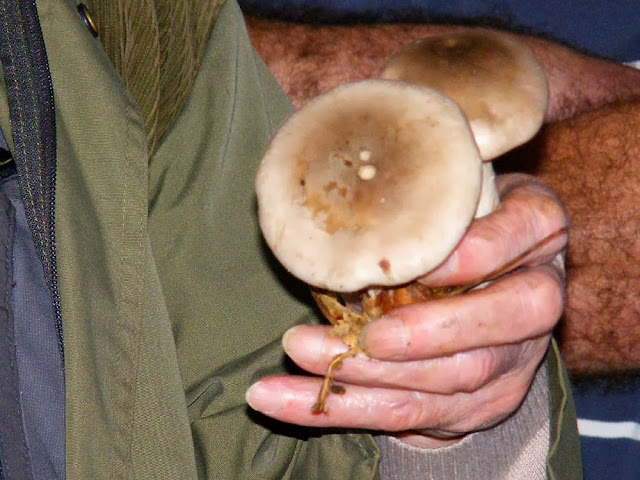 The mushrooms Paul is holding are edible -- if you know how to prepare them. Apparently you have to cut off the stems and discard them, wash the caps in water then put them into a saucepan (not a frying pan). Heat them so the water rapidly boils and the mushrooms steam and give up their juice. Tip the juice down the drain and the cooked caps are safe to eat. Frankly it sounds so dodgy I'm not going anywhere near them in the kitchen (plus I never managed to get what they were called). UPDATE: Cloud Funnelcap Clitocybe nebularis?


We found several species of chanterelle (aka girolle) including this rather rare one for this area, Cantharellus melanoxeros. 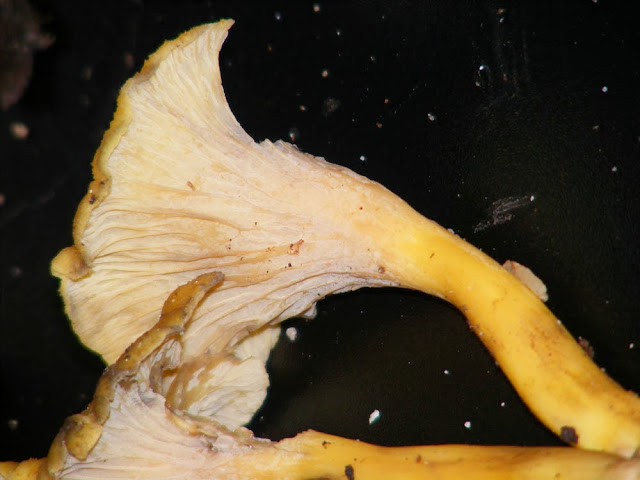 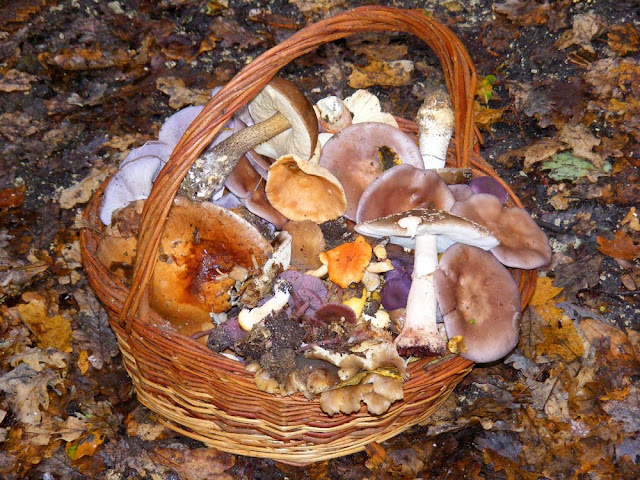 As it turns out this is going to be the only fungi outing I get to go on this year. I was all set to go on the one in the Forest of Loches this weekend just gone. I left home after an early lunch and arrived at the meeting point in good time yesterday. The only problem was the outing had been the day before, on Saturday...

To add to my deteriorating mood, a gypsy bloke on the side of the road in the forest flagged me down and tried to scam me for some 'petrol money'.

Still, it meant I got to come home and weed the back garden in near perfect weeding conditions.
Posted by Susan at 09:00

Great Dog Lichen picture...
you've managed to get the fruiting undersides in good contrast....
in fact they are almost glowing!

And the basket would make a great card!!

I was woken far too much for comfort by the rain and wind last night....
I'm going to go back to bed!!

You must have to start cleaning and
cooking that haul fairly quickly.
Don't know that I'd enjoy eating
one of those black molls...they
just look threatening. The dog
lichen is lovely, though.

Sheila: I don't think anyone eats the molls.

I wish there were something organised like this in my local woods. My friend was very disappointed to realise that her trompettes de la morte corner from last year has been cut down for wood this year and not a trompette to be seen. I continue only to find inedible and poisonous species. I will persevere!

LJ: You are not the only person who has said this to me and I can see how lucky I am to have an expert group to tap into. You would think everywhere in France would have organised fungi forays, but in fact we seem to be unusual.

There were enthusiast groups - who used to put on a hair raising exhibition every autumn - but no forays.
I was lucky to have a mushroom enthusiast to show me what could and could not be eaten....but it wasn't scientific.

Fly: none of our group are/were professional mycologists, but several are highly respected amateurs who publish in proper scientific journals and one is internationally known. The club is full of people who know all about Ingres violin.

Oh, dear, how annoying! You didn't tell us the name of the one that has to be treated with such care before eating.

Fraussie: That's because I didn't pick up what it was called. I think it's a webcap of some sort (Cortinarius sp). I'll ask Paul what it is if you are really interested.

Susan, we've tracked it down: clitocybe nebularis. Only pick young specimens and throw away the cooking water, our book says.

Fraussie: that sounds reasonable. It would explain why Paul talked about these mushrooms immediately after discussing the pieds bleus.