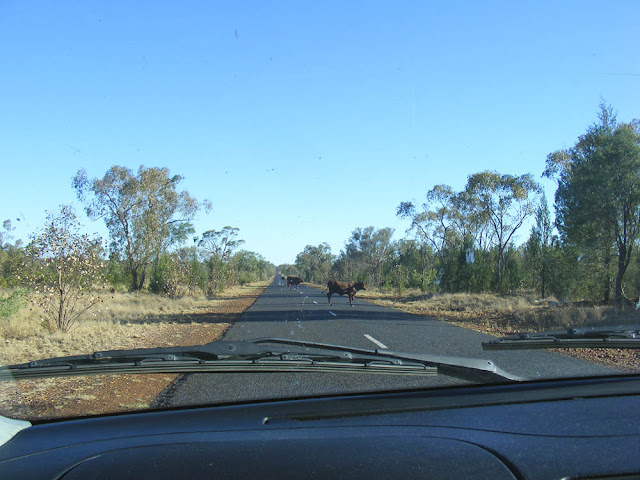 On the roads 'out west' (ie western Queensland and New South Wales) you have to be constantly on the lookout for stock or large wildlife crossing the unfenced roads. In this instance it was cattle, but it could just as easily have been sheep, emus, kangaroos, feral pigs or feral goats.

Sometimes the roads are fenced, but the fences are set back a long way from the road, forming a wide corridor of bush known as the 'long paddock'. These are droving routes, used until very recently when times were hard, to move stock from one station (=ranch) with no grass in a drought, to another many hundreds of kilometres away that has had better weather. The grazier benefitted from the free grass along the way and the government supported the system by providing watering troughs or holes and corrals for overnight stops along the route. See the Wikipedia entry for more information on the history and current situation for these Travelling Stock Routes (as they are officially known). 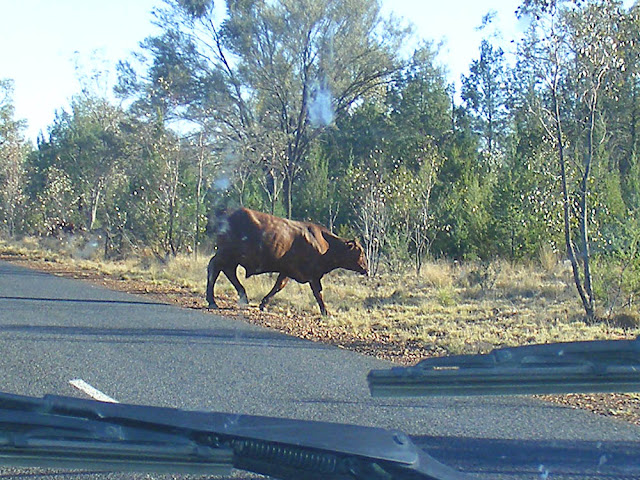 The cattle mooching across the road at this point are a breed called Santa Gertrudis. They were developed in Texas, from a mix of Bos indicus and B. taurus breeds (ie both Asian and European domestic cattle) to be an excellent all-round breed, resilient in the heat and having high tick resistance. Cattle ticks Rhipicephalus microplus are a terrible problem in Australian herds, causing fever and death in infected animals.  If your stock is in a tick infested area you cannot move them into the controlled or tick free area on the coast without providing a certificate verifying that they have been treated for ticks and inspected.

Pudding was leftover Krakatoa Cake. Originally this was going to be Chocolate Chestnut Soufflé Cake made as a GF dessert for Tim and Gaynor's curry night. However, I made the mistake of trying out my new silicone fluted bundt tin. The cake declined to come out neatly despite my best persuasive techniques, so I made a batch of chestnut cream studded with blueberries as a disguise, to ooze out and over, and rechristened the cake. It tasted fine, but was still clearly deformed. Silicone baking tins really are a waste of money and space, except for the muffin/cupcake sized ones.

I made 2 pints of custard, thus using up half the egg yolks leftover from the cake plus a litre of milk which had reached its use by date. I divided the custard up into 5 batches and it is in the freezer for Ron. Custard doesn't freeze all that well, but if you are careful when you thaw/reheat it, you can serve it without complaint. Low power in the microwave and frequent stops for rigorous stirring is the secret.
***************************************************
Wood Delivery: Our firewood merchant made an emergency delivery yesterday morning of one and a half stères (we've ordered 10 stères). We had completely run out of wood and it's getting to that time of year. The wood is aged but wet from the rain and will take a few days to dry out again. He's really struggling with the weather. He's delivered all the dry wood and can't get into the forest to pick up the next tree's worth. The ground is too soft to take a vehicle in. Even once he's got it to the yard he needs a spell of fine weather to cut and split it ready for sale.

A photo has been added to the Burnet Moth Zygaenidae entry.

A new entry has been added for Ladybirds Coccinellidae.

Some photos have been added to the Azure Bluet Coenagrion puella entry.

A new entry has been added for Bank Vole Myodes glareolus.

A photo has been added to the Swifts, Swallows and Martins entry.

Some photos have been added to the Bee Flies Bombyliidae entry.

A new entry has been added for Black-tailed Skimmer Orthetrum cancellatum.

Email ThisBlogThis!Share to TwitterShare to FacebookShare to Pinterest
Labels: Australia, nature and wildlife, The Car and Driving

Susan...
Pauline would heartily agree with you about silly-con cake moulds...
we lumbered someone else with the first [and only] one we got!!
We have got, however, some individual muffin cases that I use in the muffin tray...
they work, provided you let the cake get cold!
Not warrum... cold!!
Pauline sticks by the fluted paper cases... not that I mind... I get to scrape all the best bits of ALL the cases!!

Lovely post on my favourite vole CLETHRYONOMYS glareolus...
But, there is no way of navigating round the site...
and I am ending up with a tab bar full of LVN tabs as I go to the next older post...
it is a pain.

I've got pix of the Zygaena fausta burnet if you want to use them on your burnet page... spotted a pair on a dry chalkland mound near Chedigny...
[ http://www.flickr.com/photos/le-moulin-de-la-forge/5756359716/ ]
You've seen it... "Nice record" was the comment you left.

Just had a thought... in the top bar, after Latest... and before About...
howzabout an Index page?
You can alter that as you want to allow people to find info easily...
A slimmed-down "How to use" page as the header-page...
followed by a series of "Index" posts that you can link to from the "How to use"...
then the "blog's your oyster"...
oops, sorry, mentioned the oyster word...
sore point!!

The cake may not have turned out as you had originally intended but it was absolutely delicious! You can make it again next year.... ;0))

P.S. you can take over coffee making duties too!

Gaynor: In that case I'll bring my own coffee as well. Yours will be at least two years old by the next party :-)

Tim: Thanks for the feedback. I'm reluctant to spend the time on a manual index at the moment. The old 'how to use' had one and it was a pain to remember to do, plus very long and unwieldy. Also, you may not realise because you use Wordpress I think, but Blogger does not have a facility for a static home page. Both the current and the former arrangement is a bodge on my part and I am reluctant to change at the moment. All the links open in a new page because I dislike websites that don't. Just get into the habit of closing pages as you exit if it annoys you.

Susan,
the only Wordpress blog we've got is "Art'n'Saule"... all the others are Blogger. I hate Wordpress... it is heavy, unwieldy and gyroscopes towards it's navel!!!
Art'n'Saule is going to have to migrate... sometime over this winter... that's why updates are so few and far between.
It is fine for snippet blogs, tho'... A few lines and a photo.

I am well aware that Blogger does not have a facility for a static home page... that's why I mentioned putting it in as a page... visible in the top bar as stated...
The other alternative is to put a links line in just under the page title...
Just a top line of buttons created in HTML [like your one to close the box] and either cut and pasted in... or as part of a template...
Then repeat the Header in a larger font to make it seem like the Header... although, in reality it is the top part of the page....

I apologise now about giving feedback via the comments box, but this laptop won't let me email without setting up accounts... and thus ending up with part of my mail here and part on my machine...
if I go over to the longére, go thro' the rigamarole of switching on, find an email to reply to [the easy bit... you are foldered]....
I'll have forgotten what I wanted to write in the first place...
hello, are you still there?

My comment about the button is that LVN doesn't exist if I close the post... and I have to go back to my sidebar, open today's "Days on the Claise" and click on the next one of those updates...
When I get to that post there is no obvious navigation tool/post that acts as a central point...
The old first page at least did that...

Also you seem to be reluctant to use tags [labels]...
so searching other than the current labels [tags]... which when there are 76 [Plants], 55 [Orkids] or 33 [Flutterbies] makes a trawl through the only way to find something....

And I wasn't thinking of a single Index page... but one for each heading / topic...

Would that be the late R. Ron...
or his son Dad Ooron Ron?

Tim: I see you know Ron.

And I'll do an index page. I've added links to the species lists on the about page, btw.