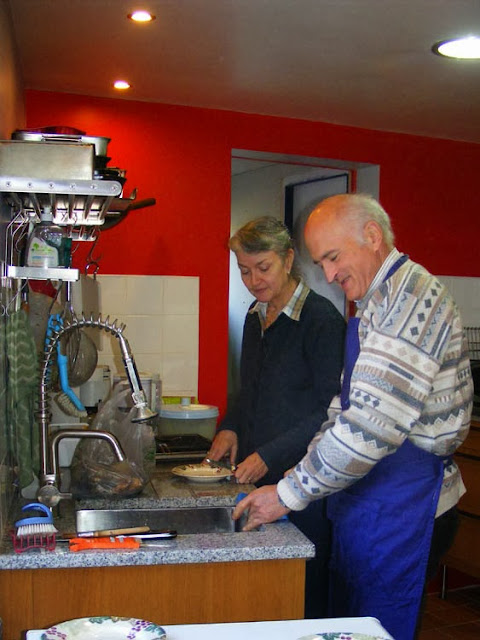 Our friends from Blois, Rosemary and Jean Michel, came to lunch recently and brought two dozen #2 spéciales oysters from Normandy with them. They also brought a nifty device for holding the oyster and a poinceau ('punch') for opening them. Jean Michel, fetchingly attired in my purple pinny, wielded the knife and Rosemary took the opened oysters and plated them. I was interested that they quite deliberately drained the oysters. I was taught to keep the oyster horizontal in order not to lose a drop of precious salty liquor. The oysters were served with wedges of lemon, multigrain bread, butter and a fruity 2012 Touraine sauvignon blanc from Domaine des Corbillieres in Oisly. Rosemary explained that they prefer the spéciales to the fines claires as the latter don't have the nice meaty nugget. She commented that they shop around to find a producer or fishmonger selling ones that are to their taste, which is not too salty, and they think that the #3s are too small. I'm hoping Rosemary will comment below and give a bit more detail on their oyster buying and preparing strategy. 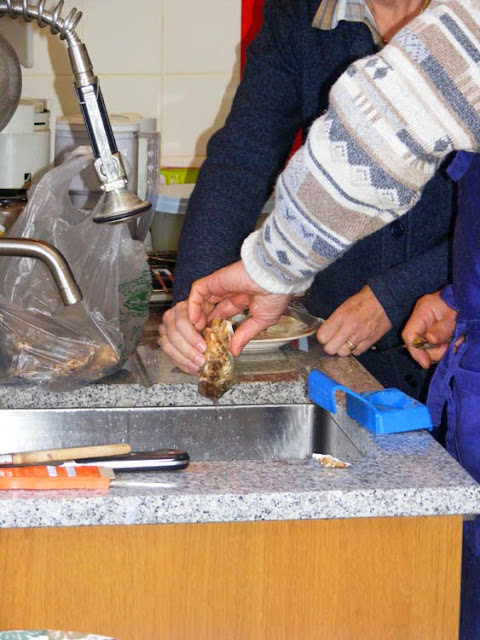 That pinny looks blue to me!!

I don't like oysters unless cooked to nothing in steak & kidney pudding...
but that's a waste of money, so I now use oyster sauce.

I think the juices are as good as they oyster, what a shame to throw it away. I preserve all juice and pour it back on them later if necessary.
I only use an oyster knife they sound like they have an easier method of opening.
Hope all well up there. Diane

We used to have en electric oyster opening device...it died from overuse.

We had a friend who collected 'wild' oysters on the Ile de Re...but my favourites were those from Cancale, or from Belen.

We're looking good there! The idea is to drain off the FIRST juice (via the hinge of the oyster so that any muck is drained away at the same time); the oyster will then excude its SECOND thicker, tastier, fresher juice. Remember, they were still brimful of juice when we ate them.
It is an oyster knife; it doesn't have that protective bit and is much stronger. Jean Michel opens the oyster at the hinge and not on the side.

Fraussie: I remember you mentioning draining via the hinge and the second water, but the rest of it was a blur. Many thanks for clarifying.