What do World War One and a Stinkhorn Fungus have in common?

That seems like a fairly random juxtaposition, but there is a surprising connection, and it's Australia.

The stinkhorn fungus Devil's Fingers Clathrus archeri (syn. Anthurus archeri) is native to Australia, but is now widespread in France. It arrived in 1914 along with the supplies for the thousands of Australian Diggers bound for the front line.


Two young Devil's Fingers fungi cut open on an fungi foray in the Forest of Preuilly in October. 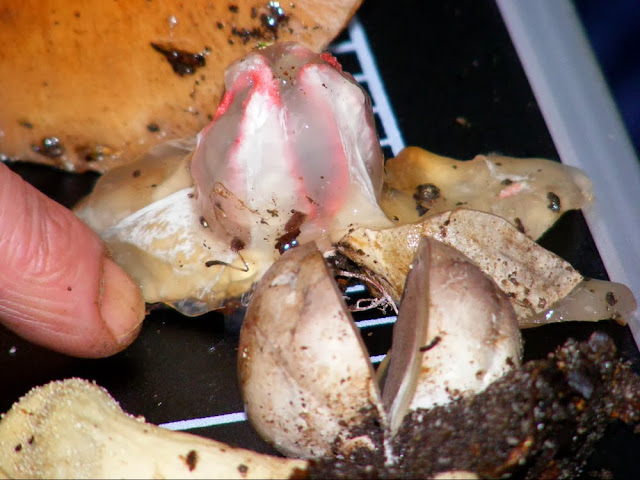 Fortunately, unlike an American fungus that was introduced in the Second World War, it is not wreaking havoc.
The juvenile fungus looks like a light brown puffball on the outside. If you cut it open it is full of spores surrounded by a layer of jelly and long red 'tentacles'. The species is related to the European stinkhorns and like them produces a foul pong and sticky substance that attracts flies which carry away the spores and distribute them. The mature fungus looks rather like a squid with red arms. They are stinky but completely harmless.

Macaroni Cheese, with (purists look away now) added veg and lardons. Many thanks to Gaynor and Antoinette for the impressive supply of cheddar that we currently have in the pantry fridge.
Posted by Susan at 09:00

Whats wrong with added veg and lardons...
I add tomatoes, bacon, beans, tuna, chicken, potatoes and even on one occasion [sorry Simon] PUMPKIN cubes.
But never all at the same time!!
The Macca must be dominant...
frog chorus!

And I do something similar to cauliflower cheese...

Whatz wrong with a little variety...

Now, there is some leftover smoked clukkybird flesh in the fridge...

Hi Susan, do you use U.S. measures (1 cup = 8 fl. oz. etc.) when you follow an American recipe? Are Australian measures more British or American? Does butter come in sticks (4 oz. each by ewright in the U.S.)? Even the fluid ounce is slightly different in U.S. vs. British measures.

Ken: I have to admit I'm fairly slapdash about such things. My measuring cups are Australian, and therefore slightly different to either American or British. Spoon measurements are different too. If I convert I generally go Australian, but I do a lot of stuff by eye. Britain and Australia don't have sticks of butter, but I know what they are and how much they weigh (in this case a quarter of the 500g block of butter I started with, which I cut off by eye).

Pauline has the "Muffins - fast and fantastic" book by Susan Reimer [which she got from Lakeland Plastics...
see Simon... some good things are available there].
Susan Reimer is an ex-pat Canadian and the back of the book has a wonderful appendix for North American use which is refered to many, many times during the year...
and at the front, a couple of sections explaining the differences.... just what is needed with so many recipes available on't'Net being of American origin.

Tim: most cook books have conversion charts in the back don't they? Most of mine do anyway, I just can't be bothered consulting them.

No Susan,
only a few of ours do...
and of those, some have only relevant bits for that book...
but there are none so concise and complete as the Muffin book one...

I'm sure you can look it all up on the 'net. That's why it's good to have a tablet computer in the kitchen.