This Gate is Locked 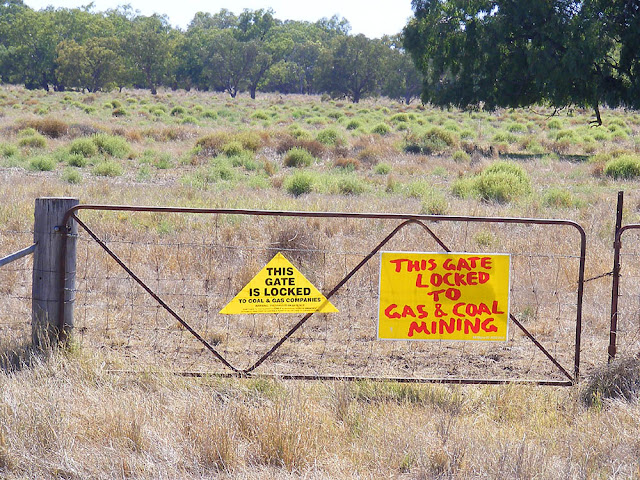 All along the Castlereagh Highway, in south western Queensland, these signs were posted on farm gates. I would say about 50% of the gates displayed signs indicating that the property owners were fighting against the coal seam gas (CSG) exploration and mining that is going on in this area. The principal issue is the damage such mining does to agricultural land and that the boom in mining comes at the expense of agriculture and conservation.

My impression is that the community in this region, once very tightknit, is now deeply divided, into pro- and anti-mining camps. The signs are supplied to landowners by the Lock the Gate Alliance, a somewhat unexpected association of 160 community groups, conservationists and farmers in Queensland and New South Wales. They are a way of demonstrating a form of legal non-cooperation with the mining companies, who are reluctant to take every single landholder to court in order to gain access to property. Landowners only own the land to the depth of 1 metre, and mining rights are owned by the Commonwealth of Australia. Mining companies apply to the statutory authority to be granted licences to conduct exploratory ventures and full blown mining operations.

Modern mining does not necessarily provide many jobs, and the residents of these areas are concerned about the legacy it leaves the next generation. Social problems due to the FIFO lifestyle many mining company employees choose are causing a lot of media chatter in Australia at the moment. It's not locals who get the jobs with the mining companies, it's people they Fly In and Fly Out. Consequently they don't bring their families to boost school numbers and shop locally. Nevertheless, some of these western towns look much more prosperous than the last time we saw them. My concern would be 'but for how long?' Does it all dwindle away when the underground resources are exhausted and what are the ongoing consequences of mining on the environment once the mining company relinquishes direct responsibility for a site.

There are well known concerns regarding the so called production water which is a by product of coal seam gas extraction. This water can be contaminated in a variety of ways, from merely saline right up to radioactive. Naturally, local people have concerns about how this water is stored, processed and ultimately returned to the environment.

The people associated with the Lock the Gate movement have genuine and legitimate concerns about mining in Australia, but although they dominate the social media and discussion forums on the subject of coal seam gas mining, I can't help feeling they would do well to seek some serious scientific allies as well, for those of us who would like a balanced and scientific analysis of the situation rather than an emotional opinion. It is striking, and worrying, how comparatively rarely CSG is given any indepth reportage in the national newspapers.

If you want to read more about CSG and fracking, I suggest you start with Robert Llewellyn's superb overview for the (British) layman here.

Fracking is VERY controversial
here in the States, particularly
in areas of bucolic countryside
like Pennsylvania. Pits neighbor
against neighbor. Mmmmm...apple
turnovers.

Sheila: Fracking is controversial everywhere, mainly because of the issue of water contamination and because it seems like a technology of desperation promoted by people who are only interested in short-term monetary gain.

And you are too late for the apple turnovers ;-)